Kargil 'Victory Run' to be held in Delhi on Sunday, join to pay tribute to war heroes

The Army is organising a 'Kargil Victory Run' on Sunday (July 21), to commemorate the courage and valour displayed by the war heroes who made 'Operation Vijay', popularly known as the Kargil War, a thundering success. 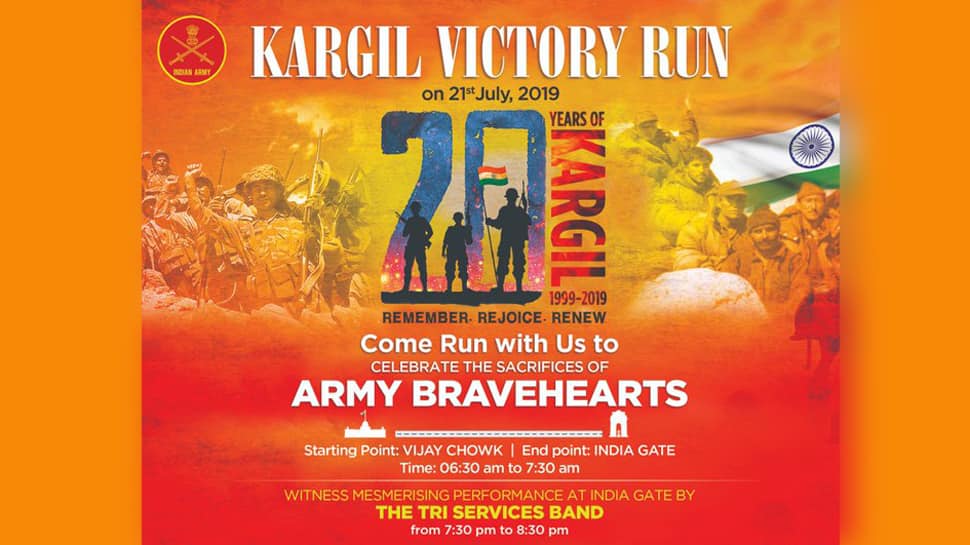 New Delhi: The Army is organising a 'Kargil Victory Run' on Sunday (July 21), to commemorate the courage and valour displayed by the war heroes who made 'Operation Vijay', popularly known as the Kargil War, a thundering success.

Taking to Twitter, the Indian Army's Additional Directorate General of Public Information announced that a run is being organised from Delhi's Vijay Chowk to India Gate to pay tribute 'to the courage, valour and sacrifice of the Heroes of Kargil'.

To pay tribute to the courage, valour and sacrifice of the Heroes of Kargil, Kargil Victory Run is being organised #NewDelhi at #VijayChowk 0600Hrs 21 July 2019. Come run with the Army Bravehearts#Sacrifice #Bravehearts #VijayChowk pic.twitter.com/BACBdsDvvq

The run will be held at 6 am on Sunday and will conclude by 7:30 am. The Army also encouraged more and more people to "Come run with the Army Bravehearts".

The nation is celebrating Kargil War's 20th anniversary in 2019 with the theme ‘Remember, Rejoice and Renew’, a press release by the Ministry of Defence said. "We ‘remember’ our martyrs, by revisiting the sacrifices and instilling pride and respect among us, we ‘rejoice’ by celebrating the victory in Kargil and we ‘renew’ our resolve to safeguard the honour of the Tricolour," it added.

The celebrations are scheduled to take place from July 25-27 in pivotal locations including Dras and New Delhi. However, as part of the build-up for the main event, several events have been organised all over the country starting from the first week of July 2019.

On July 14, the celebrations in New Delhi began with the lighting of a Victory Flame from the National War Memorial in Delhi, which will travel through 11 cities to be finally immersed into the eternal flame at the ‘Kargil War Memorial’ in Dras.

Defence Minister Rajnath Singh, who lit the Victory Flame, is scheduled to visit Kargil on Saturday pay tributes to soldiers who laid down their lives in the war.

India remembers the Kargil War for its strategic and tactical approach, the self-imposed national strategy of restraint in keeping the war limited to Kargil - Siachen Sectors and swiftly executed tri-services military strategy and plans. The determination and daring junior leadership and the courage of the jawans is also celebrated with pride and inspiration.