The trends indicate a victory for the BJP on 12 seats. Earlier Yediyurappa had confidently said that BJP will win at least 13 seats and the government will be "safeguarded". 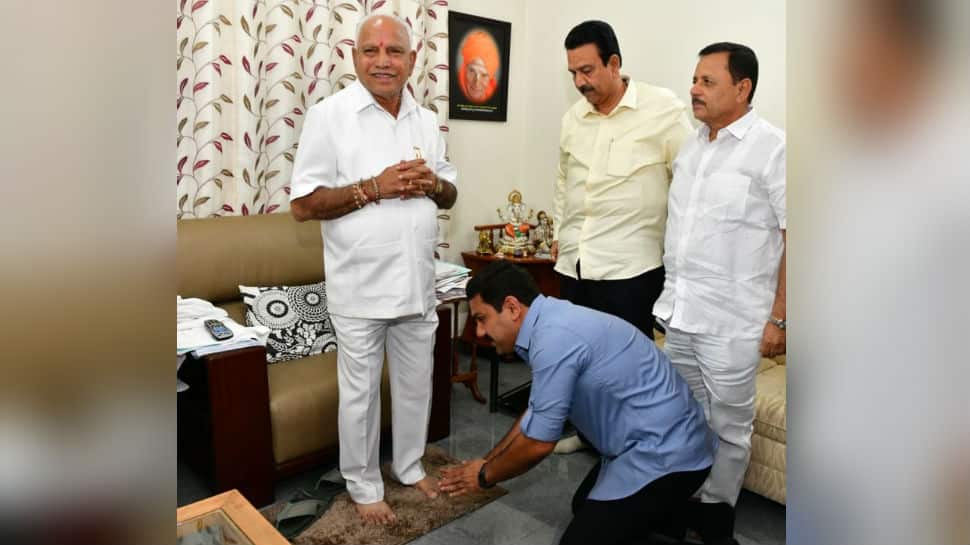 New Delhi: Chief Minister BS Yediyurappa celebrated the early leads in Karnataka bypoll in Bengaluru with son B Vijayendra and Bharatiya Janata Party (BJP) workers on Monday. The trends indicate a victory for the BJP on 12 seats. Photos shared by news agency ANI show Vijayendra seeking his father's blessings and greeting him with sweets as other leaders joined them.

Bengaluru: Karnataka Chief Minister BS Yediyurappa celebrates with his son BY Vijayendra as BJP leads on 12 out of 15 seats in #KarnatakaAssemblyBypolls. pic.twitter.com/0uualeU8Yg

The BJP and the opposition Congress contested in all the 15 Assembly seats in Karnataka, while the JD-S in 12. The seats fell vacant after the legislators resigned in July, triggering the collapse of the Congress-JDS coalition and paving the way for the BJP to come to power.

The election was held on December 5. The bypoll results are extremely crucial for the four-month-old BJP government in Karnataka. The ruling party requires at least seven seats in the 223-member Assembly.

Earlier Yediyurappa had confidently said that BJP will win at least 13 seats and the government will be "safeguarded".

The BJP candidates are leading from the Athani, Kagwad, Gokak, Yellapur, Hirekerur, Ranibennur, Vijayanagara, Chikkaballapur, KR Puram, Yeshvanthapura, Krishnarajapete and the Mahalakshmi Layout seats. Two Congress candidates, on the other hand, are leading on the Hunasuru and Shivajinagar constituencies while an independent candidate, Sharath Kumar Bachegowda is also leading from the Hosakote seat in the initial phases of the counting.