The two MLAs have chosen to resign barely ten days before the start of the budget session of the Karnataka assembly. 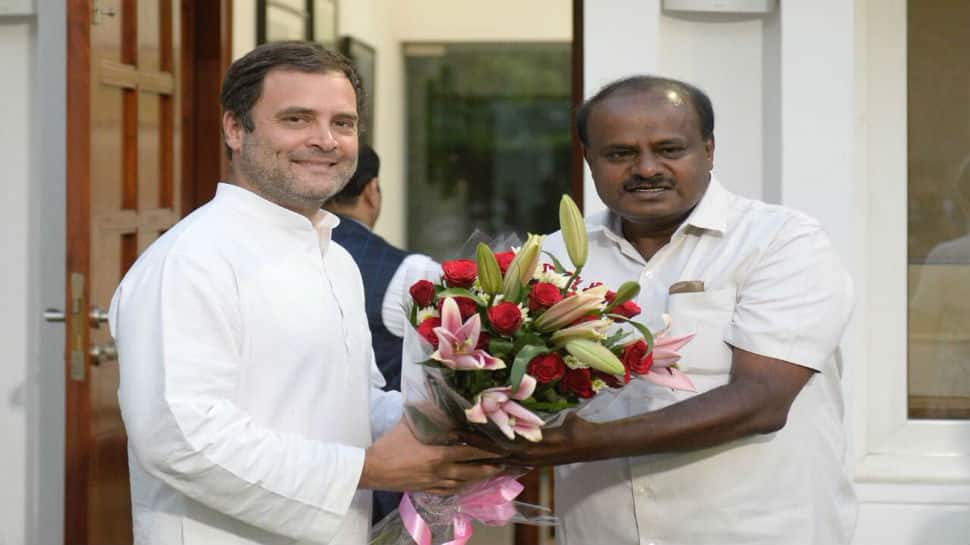 BENGALURU: The already shaky JD(S)-Congress coalition government in Karnakata suffered twin blows on Monday as two Congress MLAs resigned from the Assembly. The drama started Monday afternoon after Congress MLA from Vijayanagar Anand Singh resigned from the Assembly. Singh decided to tender his resignation after meeting Karnataka Governor Vajubhai Vala. The Congress MLA, however, did not reveal the reason behind his resignation.

Shortly after Singh's resignation, Congress MLA from Gokak assembly constituency Ramesh Jarkiholi met Assembly Speaker and submitted his resignation. Both Singh and Jarkiholi have been upset with Congress after they were not included in the Cabinet. The two MLAs have chosen to resign barely ten days before the start of the budget session of the Karnataka assembly.

With the resignations of Singh and Jarkiholi, the number of Congress MLAs who have resigned from the Karnataka assembly has jumped to three. It may be recalled that Congress MLA Umesh Jadhav had resigned before the Lok Sabha poll to join the BJP. Jadhav later contested from Gulbarga and defeated Congress stalwart Mallikaarjun Kharge in recently held Lok Sabha poll.

Few days ago, Singh had held a press conference in Ballari protesting the government's decision to approve the sale of 3,667 acres of land to JSW Steel. During the press conference, Singh had launched a scathing attack on JD(S)-Congress government and had said that his top priority is to protect the interest of the district and not the party. By making this statement, Singh had dropped enough hints that he would resign from the Congress. Sources said that Singh is expected to join the BJP.

Karnataka Chief Minister and JD(S) leader H D Kumaraswamy, who is currently in the US for the foundation laying ceremony of a temple, said that he was aware of political developments in the state. Kumaraswamy posted a tweet saying that the foundation laying of Kalabhairaveshwara Temple is going on at New Jersey, United States, under the aegis of Swamiji. Kumaraswamy added that he is closely monitoring the developments in the state. He also slammed the BJP for day-dreaming to topple the JD(S)-Congress government and form government in Karnataka.

"The foundation laying of Kalabhairaveshwara Temple is going on at New Jersey under the aegis of Swamiji. I am watching all the developments from here. BJP is daydreaming to destabilise the government," Kumaraswamy tweeted.

Meanwhile, theBJP in Karnataka is also keeping a close watch on the changing political situation as Karnataka BJP chief BS Yeddyurappa said that the saffron party will not hesitate to form the government if the Congress-JD(S) coalition government fails to complete its term. The former Karnataka CM, however, said that BJP is not planning to topple the government and will rather wait for the government to fall on its own.

The Congress-JDS coalition had formed the government after 2018 Assembly elections to keep BJP out of power, though the saffron party had emerged as the single largest party with 104 seats in 225-member house. The Congress will be left with 78 seats after Singh and Jarkiholi’s resignation while JD(S) has 37 seats. The coalition government, however, has the support of BSP and an Independent MLA.