The girl lived in the house where the dead bodies of her mother Sinchana (34), grandmother Bharathi (51), mother`s sister Sindhoorani (31), mother`s brother Madhusagar (25) were hanging from the ceiling. 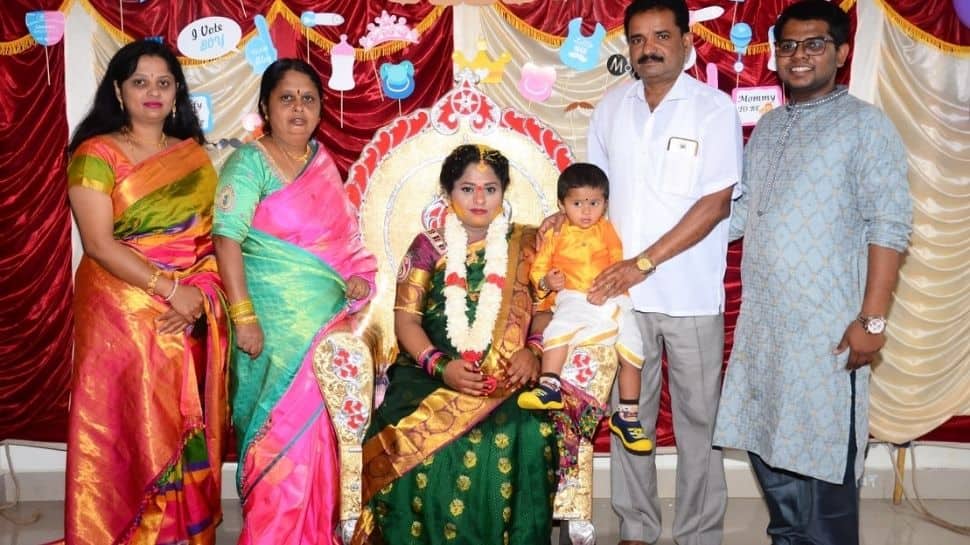 Bengaluru: More horrific details have surfaced from the shocking suicide case of four members of a family and the death of a nine-month-old baby in Bengaluru. The police rescued a minor girl who lived with the five dead bodies for five days in the house.

The five bodies were discovered inside the house in the Byadarahalli police station limits on Friday (September 17, 2021) night from where the police rescued the two and half year-old girl, Preksha. She was found in an almost unconscious state.

The girl lived in the house where the dead bodies of her mother Sinchana (34), grandmother Bharathi (51), mother`s sister Sindhoorani (31), mother`s brother Madhusagar (25) were hanging from the ceiling.

The girl was found in the room where Madhusagar was hanged. Preksha has been admitted to a private hospital for treatment. The police said that she would need treatment and counselling.

The Byadrahalli police investigating the case said that the post-mortem of bodies will be conducted on Saturday morning. Though it appears a case of suicide, it has to be confirmed in the post-mortem, they added.

Soumendu Mukharjee, Additional Commissioner of Police (West) said that the reason for the five deaths is yet to be ascertained.

"We have not found a death note from the house. Shankar, the man of the house is in a state of shock. He will be inquired as soon as he is fit," he said.

Meanwhile, Shankar has said that his daughters came home after fighting with their husbands. Instead of resolving the issue and sending them back to their husbands, his wife Bharathi encouraged them to stay back.

"I worked hard to get my daughters Sinchana and Sindhoorani educated. Son Madhusagar was also an engineering graduate and worked in a private company. Sinchana had come back home after having a fight with her husband over an ear-piercing ceremony of their daughter. There were no issues regarding finances. They have taken the extreme decision on trivial issues," Shankar said.

Police said that neighbours have informed them that, there was a fight between Shankar and his son Madhusgar. After the fight, Shankar had walked out of the house. After the incident, the family had committed suicide on Sunday itself.

The bodies were found in a decomposed state and forensic experts and police officers have predicted that the deaths have occurred five days ago. However, this will also be confirmed after the post-mortem.

Bharathi, the elderly lady was found hanging to the ceiling in the hall and Sinchana, Sindhoorani`s bodies were found in a room on the first floor along with the nine-month-old baby boy.

Madhusagar was found hanging in his room. All three children had separate rooms in the house.

The incident came to light when Shankar, a journalist, broke open the door with the help of neighbours and police on Friday night.

Shankar had told police that he called his family members for three days which went answered.

Kerala to reopen colleges, makes COVID-19 vaccine's first dose must for all