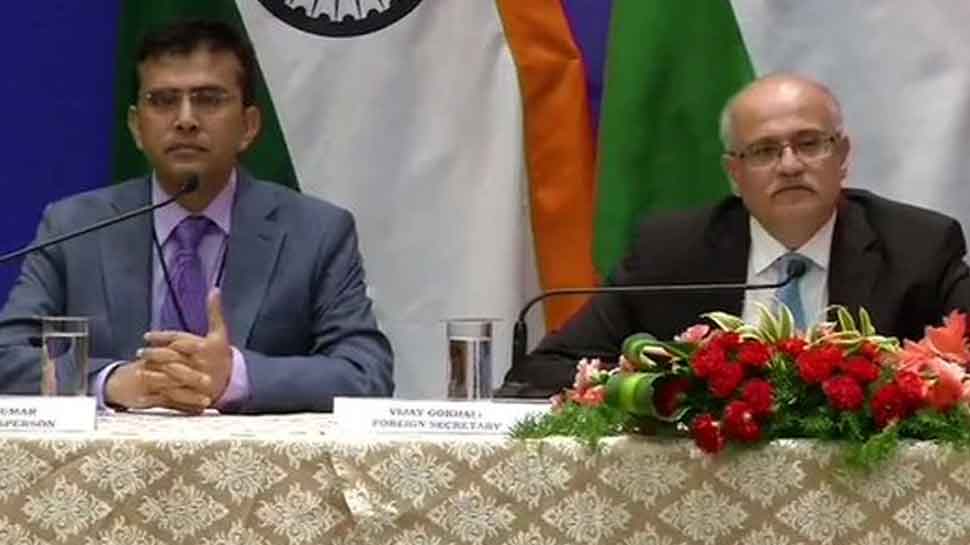 Chennai: The Kashmir issue was not raised or discussed during the second informal summit between Prime Minister Narendra Modi and Chinese President Xi Jinping in Tamil Nadu's Mahabalipuram, Foreign Secretary Vijay Gokhale said. ''This (Kashmir) issue was not raised and not discussed. Our position is anyway very clear that this is an internal matter of India," Gokhale said at a special press briefing following the culmination of the two-day summit.

Foreign Secretary Vijay Gokhale: This(Kashmir) issue was not raised and not discussed. Our position is anyways very clear that this is an internal matter of India. #Modixijinping pic.twitter.com/6tULNNCLRA

Prime Minister Modi and Chinese President agreed that it was important to deal with the challenges of terrorism and radicalisation in an increasingly complex world, the Foreign Secretary said.

''Both leaders agreed that it was important to deal with the challenges of terrorism and radicalisation in an increasingly complex world. Both are leaders of countries, which are not only large in terms of areas and population but also in terms of diversity," Gokhale said.

''President Xi spoke of greater facilitation for pilgrims going to the Mansarovar Yatra and Prime Minister Modi suggested a number of ideas on the connection between the state of Tamil Nadu and the Fujian province of China,'' Gokhale told the mediapersons.

Taking forward the 'Wuhan Spirit', the two leaders met in Mamallapuram on October 11 and 12. During the delegation-level talks, Prime Minister Modi said that the 'Chennai Connect' is the start of a new era in India-China relations

New Delhi had earlier taken exception to references concerning Kashmir following talks between Pakistani Prime Minister Imran Khan and Xi ahead of the latter's visit to India for the informal meet.

"We have seen the report regarding the meeting of Chinese President Xi Jinping with Pakistan`s Prime Minister Imran Khan which also refers to their discussions on Kashmir. India`s position has been consistent and clear that Jammu and Kashmir is an integral part of India. China is well aware of our position. It is not for other countries to comment on the internal affairs of India," Ministry of External Affairs Spokesperson Raveesh Kumar had said at a briefing this week.

A joint statement released by China and Pakistan after Xi-Khan meeting on Wednesday said that Beijing is "paying close attention to the current situation in Jammu & Kashmir" and that the matter should be "properly and peacefully resolved based on the UN Charter, relevant UN Security Council resolutions and bilateral agreements.''

In August, India abrogated Article 370 which accorded special status to Jammu and Kashmir, hiving the region into two Union Territories.

While New Delhi has maintained that its decisions in Kashmir are entirely a matter of its internal affairs, Pakistan has tried making an issue out of it on the international platform but to no avail.