Ahead of the opening of Kartarpur Corridor to commemorate 550th birth anniversary of Guru Nanak Dev, Pakistan’s Ministry of Information and Broadcasting has released a video showing posters of Khalistani separatist leaders Bhindranwale, Maj Gen Shabeg Singh and Amrik Singh Khalsa in the background. 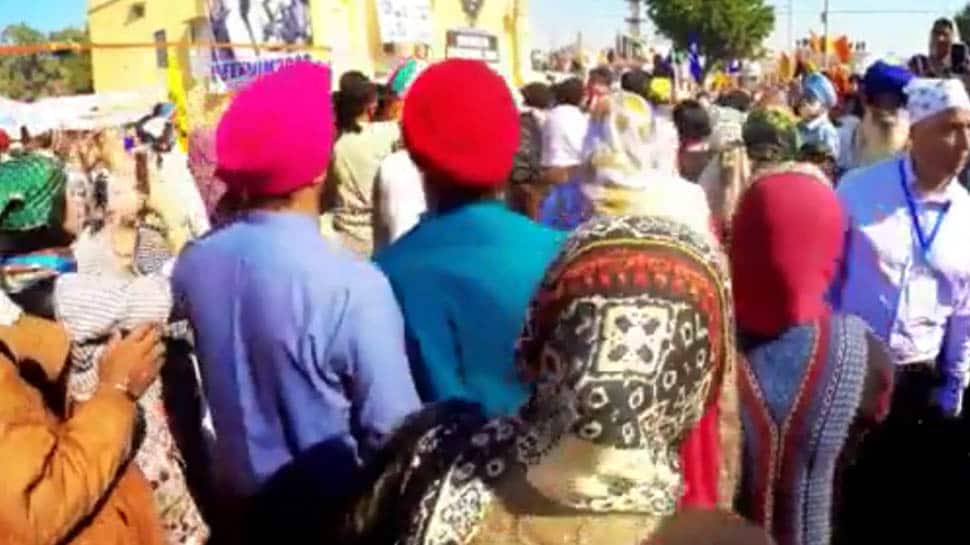 India on Wednesday slammed the Pakistan government over the use of the pictures of Khalistani separatist leader Jarnail Singh Bhindranwale in the official video released on Kartarpur, adding that this shows "the nefarious designs by the establishment on the other side", according to sources.

Ahead of the opening of Kartarpur Corridor to commemorate 550th birth anniversary of Guru Nanak Dev, Pakistan’s Ministry of Information and Broadcasting has released a video showing posters of Khalistani separatist leaders Bhindranwale, Maj Gen Shabeg Singh and Amrik Singh Khalsa in the background.

The Kartarpur song welcomes Sikh pilgrims at Gurdwara Darbar Sahib on the occasion of the opening of Kartarpur corridor. Notably, the Khalistani separatist leaders- Jarnail Singh Bhindranwale, Maj Gen Shabeg Singh and Amrik Singh Khalsa shown in the background- were killed in Operation Blue Star at Golden Temple in June 1984. Indian Army had conducted the Operation Blue Star to free Golden Temple from terrorists holed inside.

The Indian government is taking all steps to counter any propaganda by the other side using the Kartarpur corridor, said the sources, adding, "India has raised with Pakistan its concerns of Khalistanis leaders pictures being used in official videos. India has taken note of the pictures of terrorist Jarnail Singh Bhindranwale used by Pakistan in the video released on Kartarpur corridor. We are dealing with a state which has huge propaganda machinery."

The sources added, "Kartarpur corridor initiative has come from Pakistani Army, the 'push and promotion' and not Pakistan Prime Minister Imran Khan but it predates with what India has been talking since 1990. The Pakistani mask has sometimes slipped--Pakistan Foreign Minister's googly comments and Pakistan President called it a great 'chess move'. Pakistan wants to leverage the separatist movement in Punjab and other Indian states."

On the tweet of Khan saying that Indian pilgrims visiting Kartarpur will not need passports, the sources said, "We have seen tweets by the Pakistan PM on Sikh pilgrims not requiring a passport. We have sought clarification from Pakistan and waiting for the response."

Speaking on the security of pilgrims, the sources said that the security establishment is aware of the "pitfalls" and has made sure that there is no "security compromise". "We had concerns what Pakistan was attempting but we see it as essentially a positive step for accommodating the interest of all the pilgrims."

On the safety and security of the India delegation, the sources said, "India has categorically asked Pakistan to provide the highest level of security to the visiting VVIPs. The threat of anti-India activities by Sikhs For Justice (SFJ) remains a concern to India." The dignitaries that will be part of the first 'Jatha' crossing over from India to Kartarpur will go as pilgrims. It includes--former PM Manmohan Singh, Punjab CM Amarinder Singh, Union Minister Harsimrat Badal, Hardeep Puri and 150 parliamentarians.

"We are optimistic this can be a corridor of peace. It gives positive energy to relation but to convert to longer-lasting understand, the other side has to answer. No conversation is happening as of now. There are some motivations from Pakistan side," added the sources.