Since Ladakh is mainly dependent on tourism, the central government has emphasized on the local development of Ladakh after making it a union territory in the wake of the removal of Article 370. 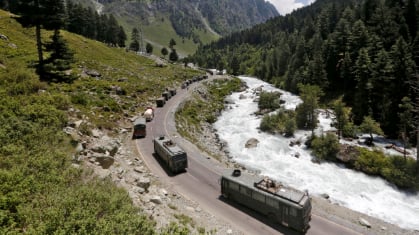 New Delhi: India's infrastructure development projects in Ladakh seem to have given an edge to the Indian Army, which positioned itself on every strategic point, to build up pressure on China, which has reportedly decided to withdraw its troops back from certain areas of the Galwan Valley.

According to Zee News report, there are several reasons that have given sleepless nights for China. India appears to have surrounded China all-around by building border roads along the Line of Actual Control (LAC) at a fast pace, besides increasing domestic sentiments against China.

The overall development of Ladakh, however, has further increased the problem of China which surreptitiously tried to violate the LAC thereby giving a blow to the Communist nation's expansionist policy.

Under the Narendra Modi government, Ladakh is witnessing overall development with roads and bridges along with plans to showcase as a big tourist place in India. The Centre has also decided to expand the Leh Airport in Ladakh.

Leh Airport is the only airport to connect Ladakh with the rest of the country. Named as Kushak Bakula Rimpouche, a new terminal building is being built at the Leh Airport, which with be equipped with all modern facilities showcasing the art and culture of Ladakh.

The development is given priority in view of the increasing number of domestic and foreign tourists in Ladakh at the Leh airport, which currently handles only 250 passengers in peak hours.

It is the only airport in the world that is built at the height of 10,682 feet i.e. 3,256 meters. In the year 2018-19, around 8.20 lakh passengers traveled from Leh Airport, which has witnessed a rise in the number of passengers by 18.7% in the last 5 years. It is estimated that the number of tourists at Leh Airport will double in the coming few years.

The new airport's terminal building will be of about 18,985 Sqm with a capacity of 800 passengers in the peak hours. The new terminal is expected to have capacity 1.6 million and it will be the first modern airport terminal in Ladakh with 18 check-in counters, 8 self-check-in counters, 2 baggage belts, 3 passenger boarding bridge, 15 lift, and 11 escalators.

Not only this, but the art and culture of Buddhism will also be given special attention in the new terminal of the Leh Airport. The key features will be:

Since Ladakh is mainly dependent on tourism, the central government has emphasized on the local development of Ladakh after making it a union territory in the wake of the removal of Article 370.