The government of Assam has published the final National Register of Citizens (NRC) list on Saturday amid tight security arrangements across the state. The final NRC list can be checked at www.nrcassam.nic.in or www.assam.mygov.in.

Guwahati: The government of Assam on Saturday published the final National Register of Citizens (NRC) list amid tight security arrangements across the state. The final NRC list can be checked at www.nrcassam.nic.in or www.assam.mygov.in. According to the Assam government officials, the list was released online around 10 AM at all NRC Seva Kendra (NSK) across the state. A total of 3,11,21,004 persons have been found eligible for inclusion in final NRC leaving out 19,06,657 persons, including those who did not submit their claims. Those not satisfied with the outcome can file an appeal before Foreigners Tribunals, said Prateek Hajela, State Coordinator, NRC.

The purpose of releasing the NRC list is to identify whether a person residing in Assam is actually an Indian or a foreigner.

Security was tightened across the state ahead of the publication of the NRC list. As a precautionary measure, fifty-one companies of the Central Armed Paramilitary Force (CAPF) had been deployed in various parts of the state. Section 144 of CrPC has been clamped in Dispur, where the state Secretariat and Assembly complexes are located. Prohibitory orders have been clamped in vulnerable areas like Bhangagarh, Basistha, Hatigaon, Sonapur and Khetri. Prohibitory orders are already in place in Dispur since August 28 and will stay until further notice.

Keeping in view the far-reaching implications of the move, Assam Chief Minister Sarbananda Sonowal has called upon the people of the state to maintain peace and tranquillity.

Ahead of the publication of the NRC list, the Ministry of Home Affairs has also urged people not to believe in rumours.

Tune In To Zee News For Live Updates -

Here are some visuals from Assam's Barpeta where people have lined up to check their names on the final NRC list at the Seva Kendra.

Barpeta: People queue up outside a NRC Seva Kendra to check their name in the National Register of Citizens (NRC) final list. A total of 3,11,21,004 persons have been found eligible for inclusion in final list leaving out 19,06,657 people. #Assam pic.twitter.com/QtkrWWI9QB

Delhi BJP MP Manoj Tiwari has called for a similar NRC exercise to be conducted in Delhi as well.

BJP Delhi Chief Manoj Tiwari: National Register of Citizens (NRC) is needed in Delhi as situation is becoming dangerous. Illegal immigrants who have settled here are the most dangerous, we will implement NRC here as well. pic.twitter.com/3T2kEogFP5

The Congress party will hold a meeting at 10 Janpath on the issue of the final Assam National Register of Citizens list.

Hard copies of the Supplementary List of Inclusions will be available for public view at NRC Seva Kendras (NSK), offices of the Deputy Commissioner and offices of the Circle Officer during office hours.

Online, status of both inclusion and exclusion can be viewed online on the NRC website. People can check their names online using the Application Receipt Number (ARN).

A total of 3,11,21,004 persons found eligible for inclusion in final NRC leaving out 19,06,657 persons including those who did not submit their claims. Those not satisfied with the outcome can file an appeal before Foreigners Tribunals, says Prateek Hajela, State Coordinator, NRC.

Here's how you can check your name in the final Assam NRC list. READ

The Centre has already extended the time period for appeal in Foreigners Tribunal from 60 days to 120 days. The Supreme Court had last month rejected the Centre and Assam governments' plea for sample re-verification to find out wrongful inclusions or exclusion of names in the NRC.

In the final draft, published in July last year, of the 3.29 crore registered names, as many as 40,07,707 applicants found their names excluded.

The final NRC list was released by the Assam government at all NRC Seva Kendra (NSK) across the state.

The Assam government has released the final NRC list amid tight security arrangements. 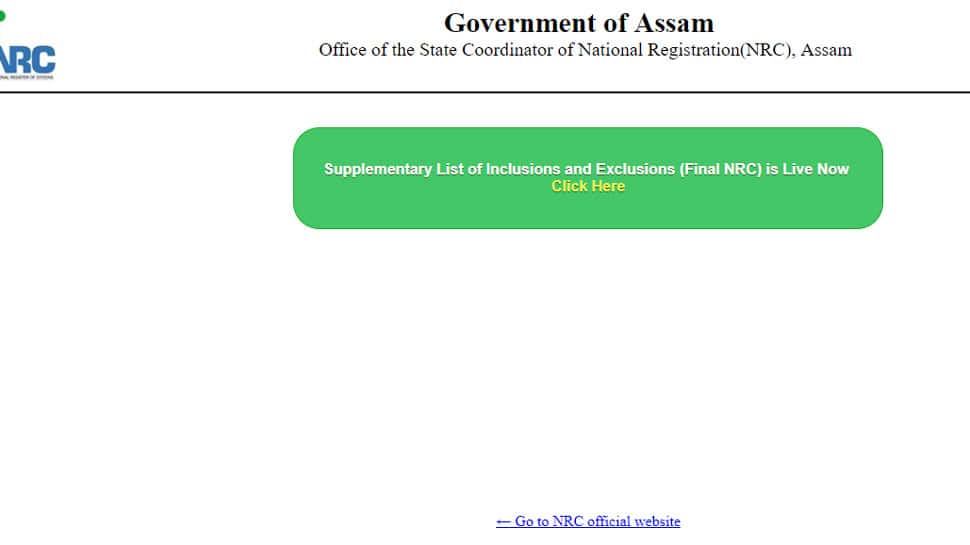 "There is a thin line between nationalism and xenophobia —besides, hatred of the foreigner could later turn into a hatred of Indians different from oneself." -- Rabindranath Tagore. The prescience of a great man! #NRC

Cautioning people not to believe in rumours about NRC, the Home Ministry has said that non-inclusion of a person's name in NRC does NOT amount to his/her being declared a foreigner.

DO NOT BELIEVE RUMOURS ABOUT NRC.

Non-inclusion of a person's name in NRC does NOT amount to his/her being declared a foreigner.

Every individual left out from final NRC can can appeal to Foreigners Tribunals, an increased number of which are being established. pic.twitter.com/8pzNlFV5Ok

In a video appeal on Friday, Assam CM Sarbananda Sonowal has urged the people to not indulge in rumour mongering ahead of the publication of the final NRC list.

My appeal to the people of Assam on the eve of publication of final #NRC pic.twitter.com/rZJJSB3cuj

Ahead of the publication of NRC list, Assam Police have appealed to people to stay calm and not to believe in rumours.

The Goverment has ensured adequate safeguards for people whose name may not appear in the Final NRC.

Don't believe rumours, as some elements are trying to create confusion in society.

Section 144 of the Code of Criminal Procedure has been imposed in several parts of Assam including Dispur, Bhangagarh, Basistha, Hatigaon, Sonapur and Khetri police station areas.

Ahead of the publication of NRC list around 10 AM, the State NRC Coordinator of Assam and other officials are expected to reach NRC Central office in Guwahati.

Assam Coordinator for NRC explains how to check name on the National Citizens Register.

Kindly refer to the information below on how to check your name in Final NRC.#OurNRCFairNRC pic.twitter.com/YGn22dBxNG

Police deployed in Hailakandi district for security measures ahead of the release of the final NRC list for Assam.