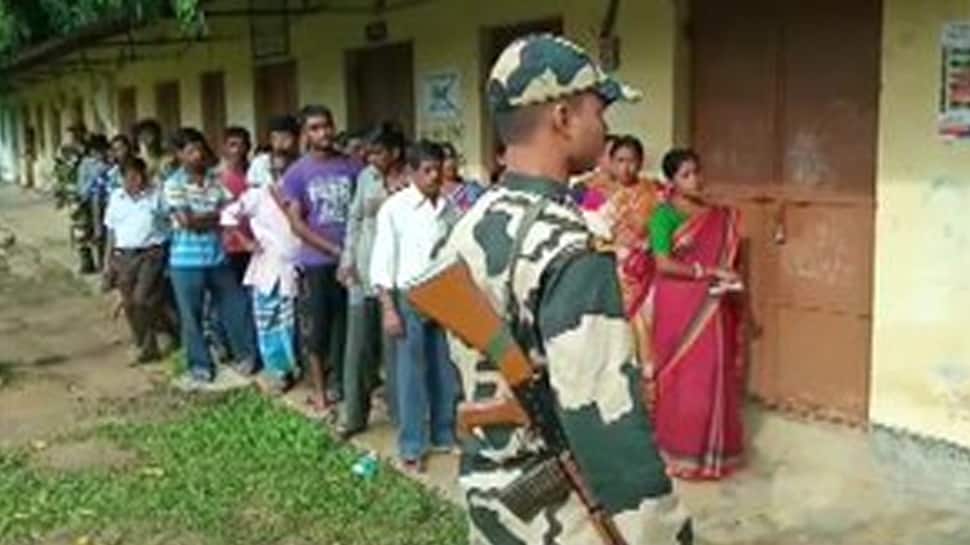 The voting for the four constituencies-- Dantewada (Chhattisgarh), Pala (Kerala), Hamirpur (Uttar Pradesh) and Badharghat (SC) (Tripura)--started on Monday morning. The counting of the votes will take place on September 27.

The Election Commission (EC) has decided to use EVMs and VVPATs in the bye-election in all the polling stations. Adequate numbers of EVMs and VVPATs have been made available and all steps have been taken to ensure that the polls are conducted smoothly with the help of these machines. The Model code of conduct is already in effect and is applicable to all candidates, political parties, the state government concerned and the Centre. The ECI has taken the decision to hold by-polls after taking into consideration various factors like local festivals, electoral rolls, weather conditions etc.

The voter turnout recorded in bypolls till 1 pm is 34.42 per cent.

Dantewada: In Masodi village of Gidam block, 94 per cent polling has been done till 12 noon.

The polling for all the seats began at 7 am and will continue till 5 pm.

Pala: Voting for bye-election in the Pala Assembly seat is currently underway at 176 polling booths spread across the constituency. A total of 13 candidates are in the fray, including Tom Jose of UDF, Mani C Kappan of LDF and N Hari of NDA. The bye-election was necessitated in Pala following the death of Kerala C

12.7% voter turnout recorded till 9 am in Dantewada bypoll.

Dantewada: Voting underway in Naxal-hit Dantewada. The voting has started in Farspal village villagers are showing tremendous enthusiasm for voting at the polling booth. A large number of people have come to vote and there is a long line. However, due to security reasons, the ink will not be put on the those living near the hill side.

Significantly, both the Congress and the BJP have fielded as candidates widows of party leaders killed by Maoists. The BJP and Congress are locked in a direct contest in Dantewada and their campaign revolves around Maoism and the attempts of the two mainstream parties to garner sympathy votes.

The Congress has fielded Devati Karma, whose husband Mahendra Karma was killed by the Naxalites in the Jhiram massacre. Many top Congress leaders in Chhattisgarh were killed in a Maoist landmine blast in Jhiram in 2013. The BJP has nominated Ojasvi Mandavi, the widow Bhima Mandavi whose death in a Maoist attack on April 9 has caused the Dantewada by-election. Maoists had attacked the convoy of the BJP leader by triggering an improvised explosive device (IED) during the Lok Sabha election. Besides Mandavi, five security personnel were also killed in the attack. The BJP legislator`s vehicle was last in the convoy.

Hamirpur: The bye-election was necessitated following the conviction of Ashok Chandel, former BJP MLA from the constituency, in a murder case and his subsequent disqualification from the Assembly. Chandel was sentenced to life imprisonment by the Allahabad High Court in a 22-year-old shootout case in which five members of a family were killed in Hamirpur.

Badharghat (SC): The by-election to Badharghat was necessitated following the death of sitting BJP legislator Dilip Sarkar. A former five-time Congress legislator, Sarkar, who joined BJP in 2017 along with seven other Congress MLAs, died on April 1 after a prolonged illness.

Pala: The by-election was necessitated by the death of Kerala Congress-Mani founder KM Mani in April, who represented the constituency since 1967.

Dantewada: The by-election was necessitated after BJP leader Bhima Mandavi was killed in a Maoist attack on April 9. Maoists had attacked the convoy of the BJP leader by triggering an improvised explosive device (IED) during the Lok Sabha election. Besides Mandavi, five security personnel were also killed in the attack. The BJP legislator`s vehicle was last in the convoy.