The Citizenship Amendment Bill will give Indian citizenship to refugees from Hindu, Christian, Sikh, Buddhist and Zorastrian communities fleeing religious persecution from Pakistan, Afghanistan and Bangladesh, was passed in Rajya Sabha on Wednesday (December 11) with 125 votes in favour and 99 against it. 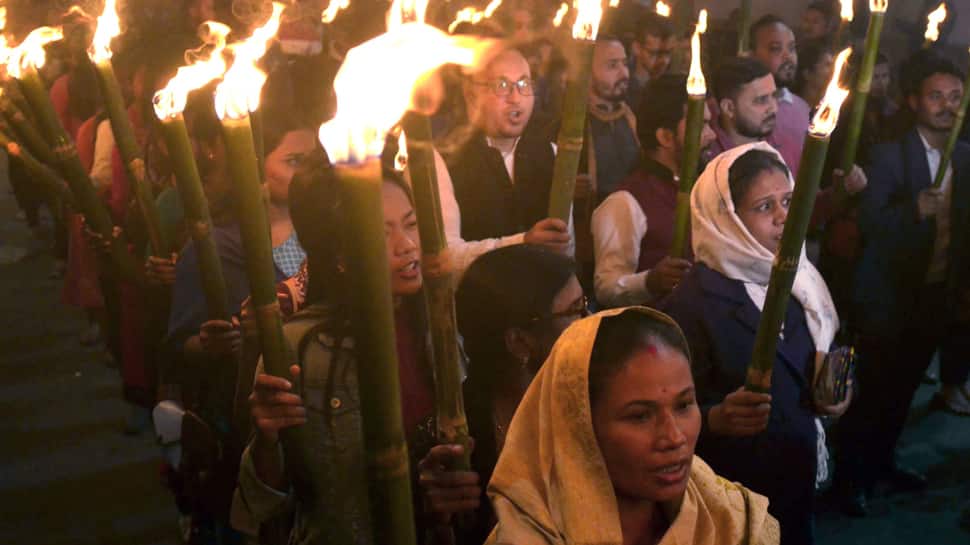 The passing of the Citizenship Amendment Bill, 2019, has sparked violent protests in Assam and Tripura despite assurances by Prime Minister Narendra Modi and Union Home Minister Amit Shah that the Bill will not harm the interests of the people living in North East.

Violent protests erupted in different parts of Assam on Wednesday (December 11) against Citizenship Amendment Bill (CAB) 2019. In Guwahati, which is the epicentre of protests, a man identified as Rahul Das suffered bullet injuries when police resorted to firing in Lachit Nagar in the city. Das has been admitted to Guwahati Medical College and Hospital. Five columns of Indian Army have been deployed in Assam, while three columns of Assam Rifles have been sent to Tripura to maintain law and order. Internet services have been suspended on 10 districts of Assam and Section 144 imposed to stop the protesters from going on rampage.

The Bill, which will give Indian citizenship to refugees from Hindu, Christian, Sikh, Buddhist and Zorastrian communities fleeing religious persecution from Pakistan, Afghanistan and Bangladesh, was passed in Rajya Sabha on Wednesday (December 11) with 125 votes in favour and 99 against it. The Bill was passed in Lok Sabha with a thumping majority on Monday (December 9).

PM Modi said on Wednesday that the passage of the Bill that it is "a landmark day for India and our nation’s ethos of compassion and brotherhood". The prime minister said that CAB will alleviate the suffering of those who faced persecution for years due to their religious beliefs.

Besides the BJP, the CAB was supported by JD-U, SAD, AIADMK, BJD, TDP and YSR Congress. The Congress, TMC, DMK, Samajwadi Party and some other Opposition parties strongly opposed the Bill in both Houses of the Parliament.

I would like to request the students, brothers and sisters, protesting against Citizenship Amendment Bill in Assam, to not lose control while registering their protest, and maintain peace in the state. Central govt has given an assurance on the floor of the House to protect the interests of Assam. They have also given the assurance to protect the culture, language and rights of the natives of Assam as per Clause 6 of the Assam Accord: Assam Governor Jagdish Mukhi (ANI)

One more protestor dead in alleged police firing in Lachit Nagar area of Ulubari in Guwahati, Assam. The deceased was an employee of the canteen at Sainik Bhavan. He was declared dead at the Guwahati Medical College Hospital (GMCH). Total three people have died one from Tinsukia and two from Guwahati (Gorchuk area and Lachit Nagar area).

Renowned Assamese actor and BJP leader Jatin Bora has quit the party to protest against the CAB.

We want to thank Centre, PM & HM Amit Shah for the courageous step of bringing Citizenship Amendment Bill. It is a big initiative of present govt to give honorable place to refugees (from Afghanistan, Pakistan and Bangladesh) living in India. We welcome them: RSS leader Bhaiyyaji Joshi

I assure every state of the East and Northeast. The traditions,culture,language etc of Assam and other states will not be affected at all. Central Govt will work with state Govts for your development. Don't be misled by Congress's statements: PM Modi

Due to Agitation in Assam and North East (NF Railway) the following Trains have been cancelled/ Partially Cancelled as under:

• The 15956 Delhi Jn. –Dibrugarh Brahmaputra Mail, Journey Commencing on 11.12.2019 will be short Terminated at Guwahati and will remain partially cancelled between Guwahati-Dibrugarh.

• The 15955 Dibrugarh - Delhi Jn. Brahmaputra Mail, Journey Commencing on 13.12.2019 & 14.12.2019 will short Originate from Guwahati and will remain partially cancelled between Guwahati-Dibrugarh.

• The 12424 New Delhi –Dibrugarh Rajdhani Express, Journey Commencing on 11.12.2019 & 12.12.2019 will be Short Terminated at Guwahati and will remain partially cancelled between Guwahati-Dibrugarh.

• The 15909 Dibrugarh - Lalgarh Awadh Assam Express, Journey Commencing on 13.12.2019 & 14.12.2019 will Short Originate from Guwahati and will remain partially cancelled between Dibrugarh - Guwahati.

Misleading statements made by Rahul Gandhi yesterday tend to fish in troubled waters of Brahmaputra and trying to seek crutches of some of the disgruntled elements to revive their fortune: Jitendra Singh, Union Min of State for Development of North Eastern Region

I appeal to the people to maintain peace and not get misled: Assam Chief Minister Sarbananda Sonowal

The whole North East is disturbed and over 90% people are against the Citizenship Amendment Bill, which is unconstitutional and undemocratic. There is unrest in the country from Kashmir to North East. The government want to do same thing what they did in Kashmir: Congress leader Ghulam Nabi Azad

Thousands defy curfew and section 144 CrPC in parts of Assam and are hitting the streets to protests. In Guwahati, Sivasagar and Tinsukia, protests are being intensified. Reports of several being injured in police firing surfacing too.

Violent clashes break out between security personnel and agitators protesting against CAB in Assam's Tinsukia, five-six shops vandalised and torched in Hijugiri area. One person who suffered serious injuries in the clash dead.

Congress MP Ripun Bora has given 'Suspension of Business Notice' in Rajya Sabha under rule 267, over 'current situation of Assam and northeast region'

Ranji Trophy matches suspended in Assam and Tripura, following protests in the states.

In the wake of violent protests, several airlines have also cancelled their flights to Guwahati and Dibrugarh and train services have also been drastically hit. (Read more here)

I want to assure them - no one can take away your rights, unique identity and beautiful culture. It will continue to flourish and grow: PM Modi

I want to assure my brothers and sisters of Assam that they have nothing to worry after the passing of #CAB.

I want to assure them- no one can take away your rights, unique identity and beautiful culture. It will continue to flourish and grow.

The Army was deployed in Assam and Assam Rifles personnel in Tripura as the two northeastern states plunged into chaos due to protests against Citizenship Amendment Bill.

Internet services have been suspended in 10 districts of Assam, beginning at 7pm on Wednesday. The services were suspended in Lakhimpur, Dhemaji, Tinsukia, Dibrugarh, Charaideo, Sivasagar, Jorhat, Golaghat, Kamrup (Metro) and Kamrup.

Internet services are already suspended in Tripura for 48 hours from 2pm on Tuesday. Tripura government has banned SMSes on the networks of all mobile service providers.