Delhi MCD Elections 2022 Latest updates: Delhi recorded 50% of voters turnout by the end of the polls. COunting to be done on December 7.

Delhi MCD Elections 2022 LIVE Updates: Voting began for the high-stakes municipal polls in Delhi today, December 4, 2022, a contest which is largely being seen among the Bharatiya Janata Party (BJP), Aam Aadmi Party (AAP), and the Congress. The polling for the Delhi civic polls began at 8 am and will continue till 5 pm. The MCD elections are being held across 13,638 polling stations set up by Delhi State Election Commission and 1,45,05,322 voters are eligible to cast their franchise to decide the fate of as many as 1,349 candidates. Nearly 229 voters of  1,45,05,322 are aged over 100 years and 2,04,301 electors are in the age group of 80 to 100 years. The state commission has also established 68 model polling stations and 68 pink polling stations. To ensure a hassle-free civic election, the first one after the fresh delimitation exercise, the Delhi Police has deployed around 40,000 security personnel at every nook and corner of the national capital.

This is also the first civic poll being held in the national capital after the February 2020 Delhi riots and as per data shared by officials, 3,360 booths, spanning 493 locations, have been identified in critical or sensitive categories.

There were 272 wards in Delhi and three corporations -- NDMC, SDMC and EDMC -- from 2012-2022, before being reunified into an MCD that had formally come into existence on May 22.

The erstwhile MCD, established in 1958, was trifurcated in 2012 during Sheila Dikshit's tenure as the chief minister.

Earlier in the 2017 civic election, the BJP had won 181 of the 270 wards, the AAP 48 wards and the Congress 27. Polling could not be held on two seats due to the death of candidates.

In 2017 MCD polls, the voting percentage was recorded about 53.

The polling percentage in Delhi MCD elections, for all 250 wards, stands at approx 50% till 5.30 PM: State Election Commission#MCDElections

Delhi Congress President Anil Chaudhary's name was not present in either voter or deleted list.

"My name is neither in the voter list nor in the deleted list. My wife has voted. Officials are checking it," says Delhi Congress president Anil Chaudhary who arrived at a polling booth in Dallupura to cast his vote for #DelhiMCDElections pic.twitter.com/cHWtjYin5f

The polling percentage in Delhi MCD elections, for all 250 wards, stands at approx 45% till 4 PM: State Election Commission#MCDElections

The voters of north-west Delhi's Katewara village show anger towards the MCD authorities and said that they will not cast their voters till their voices are heard.

Delhi | People of Katewara village in North West district say they have boycotted MCD elections due to a lack of basic amenities like proper roads, drains in the village

Till the time the authorities don't hear our grievances, we won't vote, they say. pic.twitter.com/KboD5CL7R1

The national capital sees weak voter turnout as only 30 of voters have cast their votes in the ongoing MCD elections till 2 PM.

Around 30% of voters turnout recorded till 2 pm in #MCDElections2022: State Election Commission

"People are suffering from issues such as cleanliness. MCD hasn't done anything for us since a long time, so I've decided to contest independently," said a candidate Kumkum pic.twitter.com/XzhsMpuZnH

While the Arvind Kejriwal-led Aam Aadmi Party is looking to wrest power from the BJP, the saffron party is eying its fourth consecutive term at the civic body. The Congress, which has suffered a back-to-back drubbing in the national capital since 2015 in parliamentary, assembly and municipal corporations polls, is looking to redeem itself with a notable performance this time.

The voting for Delhi civic body elections began at 8 am today at over 13600 booths across the national capital, the union territory recorded 18% voter turnout till 12 pm and the polling will continue till 5 pm. Over 1.45 crore voters will decide the fate of more that 1300 candidates for 250 wards of Delhi municipal corporation.

Manoj Tiwri cast his vote at a polling booth in Yamuna Vihar and claimed that names of 450 voters were deleted from the list because they supported BJP.

#DelhiMCDElections | In Subash Mohalla ward, names of 450 voters have been deleted from the voters list because they support BJP. This is a big conspiracy by the Delhi govt, will complain against this and appeal for cancellation of this polls and re-election: Manoj Tiwari, BJP MP pic.twitter.com/oM3Of9R3cf

People who call themselves honest will get a befitting reply from people. What AAP ministers are doing inside the jail has come in front of the world: M Lekhi pic.twitter.com/cXSD69fIUg

Union Minister Hardeep Singh Puri cast his franchise for Delhi Municipal Corporation Elections and said the polls are a wake-up call for Delhi.

#MCDElections | These polls are a wake-up call for Delhi. We've to make India a developed country by 2047...Recently a report has predicted that we'll become no. 3 (economy) in next 4-5 years. So people have to choose which brand of politics they want to follow: Union Min HS Puri pic.twitter.com/qZXuBXU9RV

Delhi recorded 9% of voters turnout till 10:30 am, said the State Election Commission

Around 9% of voters turnout recorded till 10:30 am in #MCDElections2022: State Election Commission 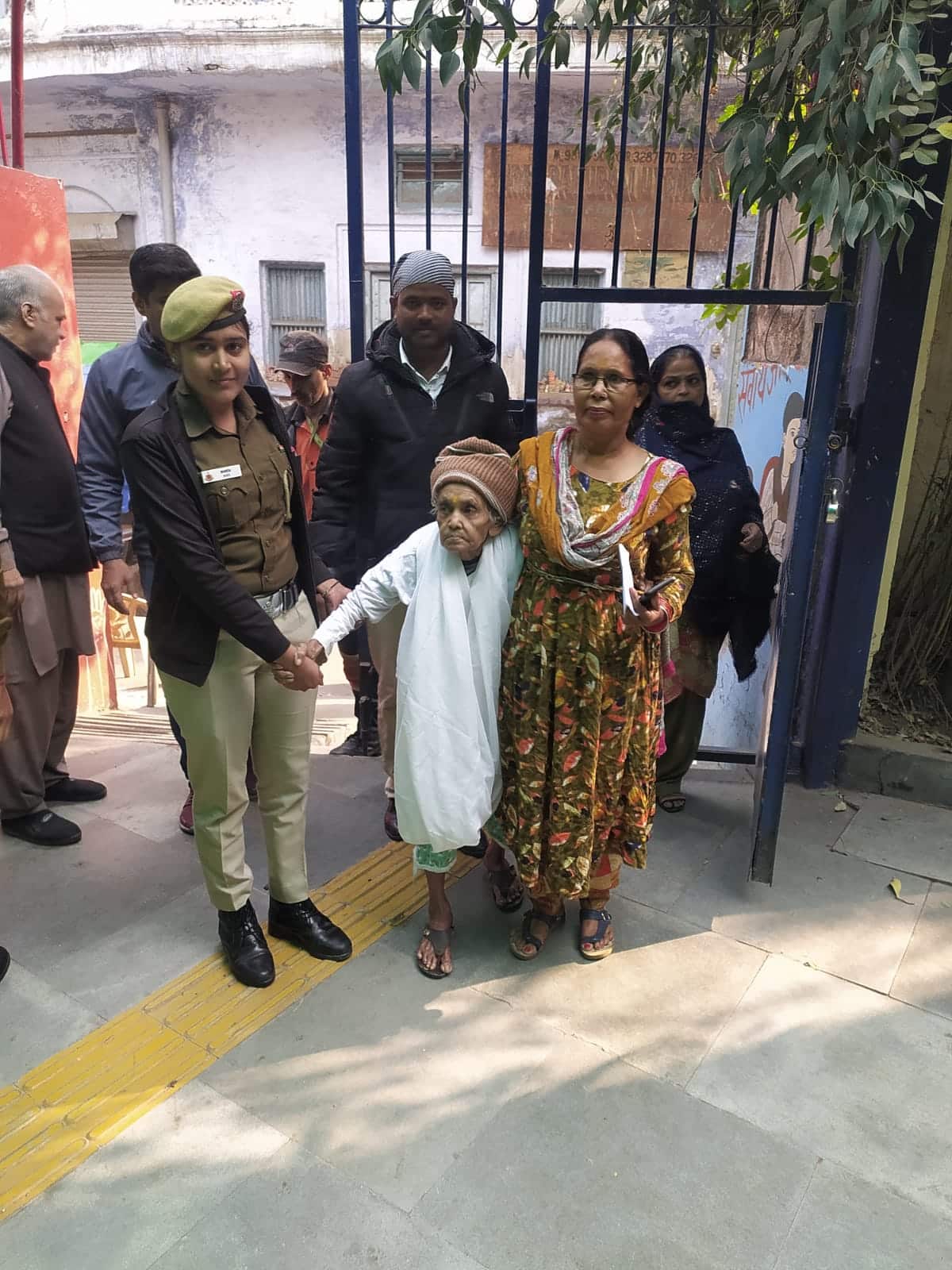 Delhi police has deployed 40,000 security personnel at every nook and corner of the national capital to ensure a hassle-free civic election.

Delhi | People queue up to cast their votes at a polling booth in Matiala village. Voting for #MCDElections2022 has begun pic.twitter.com/UqWjmUfTtE

Nearly 1.5 crore voters will cast franchise for Delhi municipal corporation election which is being held at 13,638 polling stations across the national capital. High-stake MCD elections are conducted for 250-wards and the counting of votes will be held on December 7.

The voting for the high-stakes MCD elections with 250-wards is underway at 13,638 polling stations set up byDelhi State Election Commission for the civic body polls in the national capital and the counting of votes will be held on December 7.

Voting underway for #DelhiMCDElections; visuals from a polling booth in Matiala village

"Roads, women's safety, water are the issues I considered for voting. People should come out and vote & understand their responsibility," says first-time voter Sonam pic.twitter.com/BQNCc7GoGj

Delhi Congress president Anil Chaudhary who arrived at a polling booth in Dallupura said that his name was neither on the voter list nor in the deleted list however his wife cast her voter for Delhi MCD elections.

"My name is neither in the voter list nor in the deleted list. My wife has voted. Officials are checking it," says Delhi Congress president Anil Chaudhary who arrived at a polling booth in Dallupura to cast his vote for #DelhiMCDElections pic.twitter.com/cHWtjYin5f

The city Excise Department announced the ban on alcohol sales for three days in the national capital starting for the Delhi municipal corporation election. The three-day ban will came to force on Friday (December 2) evening and will continue until the completion of voting. When the votes will be counted on December 7, liquor sales will again be prohibited.

I have full confidence that a large number of people from Delhi will cast their votes. Under the leadership of PM Modi, BJP has taken the country to new heights, I hope people vote accordingly. Delhi has seen the work of BJP in last 15 years: Former Health Min Dr Harsh Vardhan pic.twitter.com/Ssz9kTqAYM

Casting her voter at a polling booth in Raghubir Nagar, Congress leader Alka Lamba appealed to voters to cast their franchise. "People should vote for change," she said.

"I appeal to people to come out of their homes and vote. People should vote for change," she says pic.twitter.com/iOCkVBdswq

The Bharatiya Janata Party has promised to regularise weekly markets of eight lakh street vendors of the national capital if BJP returns to power after the Municipal Corporation of Delhi (MCD) elections scheduled for Sunday.

Earlier, BJP`s National Spokesperson Gaurav Bhatia said, "Taking cognizance of the demand of eight lakh street vendors of Delhi that their weekly markets be regularized, BJP has determinedly decided to regularize them.

BJP MP Parvesh Verma and his wife cast their votes for Delhi municipal corporation election 2022 in Matiala Village where he claimed that the saffron party will get around 210 seats out of 250.

AAP was claiming to form govt in Goa, Uttarakhand & UP but people know they have a habit of lying. During COVID, no one from AAP was seen working for the people. Only MCD workers were standing with people. We're getting around 210 seats out of 250 in the MCD polls: Parvesh Verma pic.twitter.com/Kivqni48wn

Over 1,300 candidates from different political parties are in the contest for the Civic body polls in Delhi. The AAP and BJP are fighting on all seats. The Congress has fielded candidates on 247 seats as nominations of three of its candidates were rejected over technical issues.

Delhi DyCM Manish Sisodia on MCD Election day thrashed BJP and said the party has done nothing  for Delhi in 15 years. "It has failed miserably to work for people," he added.

1.5 crore people are going to vote in Municipal Corporation polls. I appeal to people to keep in my mind that MCD's priority is to keep the city clean. BJP has not done anything for Delhi since 15 years, it has failed miserably to work for the people: Delhi Dy CM Manish Sisodia pic.twitter.com/C6I9ZKz2ln

Congress leader Ajay Maken cast his vote at a polling booth in Rajouri Garden and said people should vote for the candidates who will be available for them after the polls.

Delhi | People queue up to cast their votes at a polling booth in Matiala village. Voting for #MCDElections2022 has begun pic.twitter.com/UqWjmUfTtE

Congress leader Ajay Maken arrives at a polling booth in Rajouri Garden to cast his vote for.

Congress leader Ajay Maken arrives at a polling booth in Rajouri Garden to cast his vote for #DelhiMCDElection2022 pic.twitter.com/Hh6Ai2H9VK