Monday was a yet another day of an intense power struggle in the Karnataka Assembly but the possibility of trust vote was pushed to the next day despite BJP pushing aggressively for it. 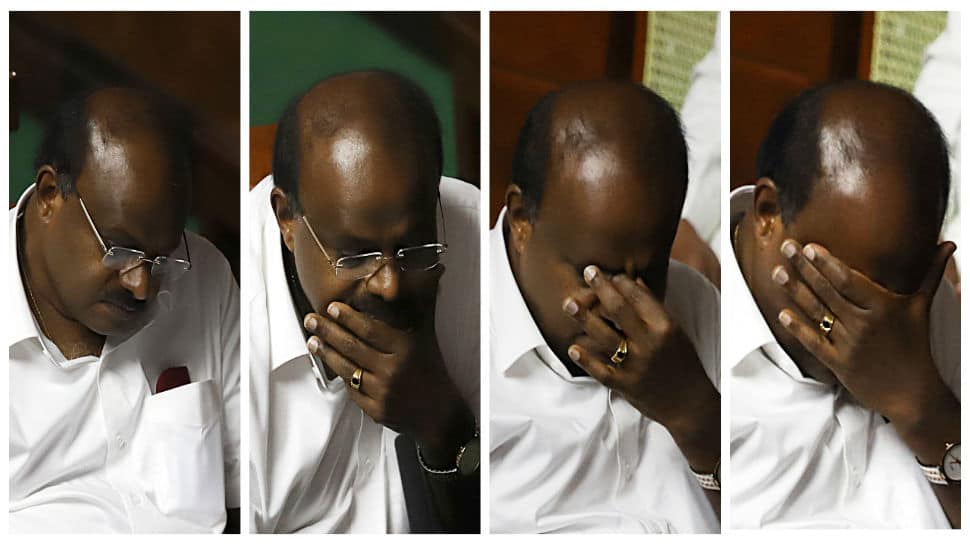 The ruling alliance of the Congress-Janata Dal Secular and the Bharatiya Janata Party (BJP) continued to trade charges in Karnataka Assembly even as Speaker KR Ramesh Kumar eventually adjourned the House till Tuesday without trust vote taking place.

Members of the government reiterated horse-trading allegations against the BJP, accusing the opposition party of using the office of Governor for the purpose. CM Kumaraswamy even claimed that a fake resignation letter had been sent to the Governor with his forged signature.

Speaker Ramesh Kumar, also, has summoned rebel MLAs for a hearing on Tuesday, a day that could once again see the possibility of a trust vote taking place.

Here are the highlights from the day:

House has been adjourned till 10 am on Tuesday.

Speaker has served notice to rebel MLAs, giving them time till 11 AM tomorrow. BJP is trying to convince them that they won't be disqualified & they will be made ministers. As per Constitution of India, you can't be made a member once you're disqualified: DK Shivakumar

It is getting outright ugly within Vidhana Soudha. Now, Kumaraswamy says false rumours of his possible resignation being spread.

"I got information that I have tendered my resignation to the Governor. I don't know who is waiting to become CM. Someone has forged my signature and spread the same on social media. I'm shocked at the cheap level of publicity," he says.

Speaker Ramesh Kumar sends a stern message after Congress MLA HK Patil says speaking and debating on trust vote would only be right after Supreme Court takes a decision tomorrow.

"Don't push me to a point where I'll have to take a decision without asking you. The consequences will be disastrous."

CM had promised that he will finish it (trust vote) today and prove the majority today. Now I've spoken to Sunil, the chief Whip, over finishing it today. We will be in the house till 12 am: BS Yeddyurappa

Ruckus continues in Assembly. Speaker Ramesh Kumar says he is ready to sit till midnight if required.

MLAs continue to stay inside the Vidhana Soudha in Bengaluru even as the session has been adjourned for 10 minutes.

Home Minister MB Patil has called an official meeting with Commissioner of Police to discuss about zero traffic reportedly given to rebel MLAs when they came back to Bengaluru to meet the speaker: ANI

Home Minister MB Patil at Vidhana Soudha: Only because Governor had asked us to provide them (rebel MLAs) security, we did that. Zero traffic was not provided to them.

JD(S) MLA, AT Ramaswamy walked out of the Vidhana Soudha following this statement on zero traffic reportedly given to rebel MLAs. Ramaswamy had said, "If Home Minister is lying blatantly in front of the House, how can I stay here?"

#Karnataka Speaker KR Ramesh Kumar at Vidhana Soudha, Bengaluru: Each member will speak only for 10 minutes. Don’t make me say this again and again. pic.twitter.com/6onm7voPO9

Former chief minister and Congress leader Siddaramaiah claims that the rebel MLAs would side with the ruling Congress-JDS coalition if they come back.

"If the rebel MLAs come back then they will be with us. Rebels have told that they are not living comfortably, they could have stayed back here itself...Speaker will take a call on confidence motion. We have already said that we would prove the confidence in Vidhana Soudha. Case is pending in Supreme Court. We have also filed the petition, most probably tomorrow (on Tuesday) Supreme Court will hear our plea," he told mediapersons.

Congress leader Krishna Gowda said that If Speaker does not take a decision on the resignation matter before him, then this dilemma will continue. Either they should not be MLAs or they will have to be MLAs and be present in the house. Gowda added that SC cannot give us a solution. Speaker has 3 options:

Even as the flip flop over trust vote in Karnataka Assembly continued on Tuesday, Congress leader DK Shivakumar launched yet another scathing attack on the Bharatiya Janata Party (BJP), accusing it of using the Governor of the state in the hurry to come to power.

Speaker KR Ramesh Kumar says he is "worried about the people of Karnataka" who voted Congress and JDS to power. "They will be left without an MLA," he says. Referring to ruling alliance's allegations of horse-trading by the BJP, the Speaker seeks documentary evidence, adding that in case of no proof, the claims would be expunged from the records.

Responding to the remarks, minister Krishna Byre Gowda cites an interview of a rebel MLA wherein the latter said that he would join the BJP as he was promised a ministerial berth.

Karnataka Assembly Speaker KR Ramesh Kumar says that though he cannot set a time-frame for the trust vote, he would request the members of the House to go for trust vote today itself. The Speaker further says, "We usually issue notices to all the MLAs for the session. If the MLAs feel that they're under threat, they can approach me and I will give them security. It's their wish if they want to attend the session or not."

Chief Minister HD Kumaraswamy has sought more time for floor test. He has requested Speaker KR Ramesh Kumar to conduct the floor test on Wednesday. However, no assurance has been given by the Speaker.

Supreme Court refuses to give early hearing on plea by two independent Karnataka MLAs seeking a direction to conclude floor test in Assembly on Monday.

Karnataka Assembly Speaker KR Ramesh Kumar summons rebel MLAs to appear before him at 11 am on July 23.

The Congress hits out at the BJP ahead of trust vote in Karnataka. "For the BJP everything is for sale, forests, farmers lands, rivers. The Karnataka Assembly is no exception," says a tweet on official handle of the Congress party.

For the BJP everything is for sale, forests, farmers lands, rivers. The Karnataka Assembly is no exception. pic.twitter.com/41lM4aM8rN

Congress MP BK Hariprasad has given notice in Rajya Sabha under rule 267, for suspension of business for discussion over 'Constitutional crisis in Karnataka'.

BJP MLAs leave from Ramada Hotel for Vidhana Soudha. The party is slated to hold a meeting before the House proceedings begin.

Shiv Sena mouthpiece Saamana has hit out at Kumaraswamy, saying the JDS leader must resign at the earliest. Terming the developments in Karnataka as "political drama", the Saamana editorial said that Kumaraswamy was just buying time by holding discussion on the floor of the House. READ FULL STORY