Even after several days of the announcement of assembly election results, the political stalemate continues in Maharashtra. The BJP, which emerged as the single-largest party, has not staked a claim and an aggressive Shiv Sena is staying firm on its demand of rotating the chief minister's post between the allies for two-and-a-half-years each.

MUMBAI: As pre-poll allies in Maharashtra, BJP and Shiv Sena continue to lock horns over the sharing of power in the state, Devendra Fadnavis on Friday submitted his resignation as Maharashtra CM to Governor Bhagat Singh Koshyari and was appointed as the acting Chief Minister.

Following his resignation, Fadnavis addresses a press conference and accused Shiv Sena of delaying the government formation in Maharashtra for their own interest. Fadnavis also accused Sena chief Uddhav Thackeray of 'lying' and denied his claims of talks over equitable sharing of CM post. He also stated that he was deeply disappointed with the way some of the Sena leaders behaved after the results were announced. He said that he was 'shocked' to see Uddhav's statement that 'options were open for him'.

Fadnavis claims were however contradicted by Uddhav who addressed a media conference stating that the 'caretaker' CM and BJP President Amit Shah had agreed on an equal sharing of power and responsibility with his party. The Sena chief slammed Fadnavis further for trying to prove him as a 'liar' and reiterating his stand 'options are open for everyone to form government in Maharashtra'.

Both Fadnavis and Uddhav, who are adamant on taking the CM post in Maharashtra, claimed that the deadlock in the state would end very soon.

The tenure for the present day government in Maharashtra expires on Saturday following which a President rule will be enforced in the state. The BJP, which emerged as the single-largest party in the state with 105 seats, followed by Shiv Sena with 56 seats, have so far not staked a claim for government formation in the state. The NCP and Congress won 54 and 44 seats respectively in the 288-member seat where the majority mark is 145.

Tune In to Zee News for latest updates on Maharashtra political crisis:

On a question to BJP trying to breakaway Sena MLAs:
Uddhav Thackeray ji :Let them try, we’ll see! Also,is it okay for BJP to even attempt breaking MLAs from other parties to get numbers to form a government?That is an acceptable solution for you(media)? *another mic drop moment*

Devendra Fadnavis tweets after submitting resignation: Submitted my resignation as Maharashtra CM to Hon Governor Bhagat Singh Koshyari ji. Hon Governor asked me to function as the caretaker CM till the alternative arrangements are made.@BSKoshyari. 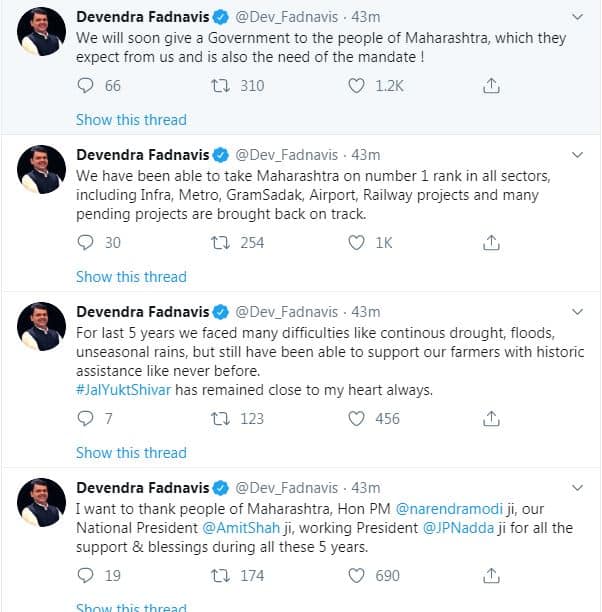 It is very sad that while cleaning the Ganga their minds became polluted. I felt bad that we entered into an alliance with the wrong people: Uddhav

It is very sad that while cleaning the Ganga their minds became polluted. I felt bad that we entered into an alliance with the wrong people: Uddhav

Onus on BJP to explain on how they will form the government in Maharashtra. RSS must clarify if we were lying and we are not a Hindu party: Uddhav

Why should I speak to someone who has accused me of lying. I regret spending so much time with wrong people. I continued alliance with BJP because of Fadnavis. Options open for everyone for government formation in Maharashtra: Uddhav

I considered Fadnavis a friend and therefore, we gave our support to him for the CM post earlier. BJP not a friend but it should stop lying: Uddhav

We don't need blessings from Fadnavis and Amit Shah for Shiv Sena leader to form government in Maharashtra. Fadnavis accused me of lying: Uddhav

I have told BJP that Sena won't settle for Deputy CM post. Had promised Bal Thackeray that Maharashtra will have Shiv Sena CM one day: Uddhav

Following Fadnavis resignation, Sena leader Sanjay Raut said the party can form the government in Maharashtra and install a Shiv Sena leader whenever it wants.

Uddhav Thackeray will respond to Devendra Fadnavis allegations at 6.30 pm.

If Fadnavis says the BJP will form the next govt , then I wish him luck. From our side, I will say we too can form the govt: Sanjay Raut

Whatever the issues were, they should have been resolved by talks, but that has not happened. In the past five years, there has been mutual respect between the allies, but now Uddhav Thackeray has not taken my calls: Fadnavis

We tried everything to keep alliance afloat. Why shud we continue with such an ally who has gone back on his words for their own interests? Uddhav Thackeray's statement on the day of the results when he said that 'all options were available to form the government', was 'shocking'. We never said anything against Sena stalwart Bal Thackeray, even when we contested alone in 2014. However, in the last few days, several statements have been made by Sena against BJP and PM Narendra Modi which is disappointing: Fadnavis

Governor asked me to be active CM till next govt is formed in Maharashtra. I will fulfil my responsibility of acting CM. We will try our best to form the government in the state: Fadnavis

Uddhav Thackeray's statement on the day of the results when he said that 'all options were available to form the government', was 'shocking'. People have voted for the Mahayuti government together, but now allies are looking for their own interests. I want to make one thing clear about their demand for a rotational chief minister, that I have no knowledge of such an understanding or deal between the two parties. If Uddhav Thackeray has spoken to Amit Shah in my absence, then I am not aware of it: Fadnavis

Devendra Fadnavis addresses media after submitting his resignation to Governor:

My resignation has been accepted by Governor Bhagat Singh Koshyari. We ran a clean govt in Maharashtra and tackled several problems together. The state govt stood by farmers during drought. During my tenure as Maharashtra CM, we pushed several irrigation projects in the state and started new schemes. I thank PM Narendra Modi, Amit Shah for letting me govern Maharashtra. I also thank people of Maharashtra for allowing me to serve for 5 years.

Devendra Fadnavis: I have tendered my resignation to the Governor and he has accepted it https://t.co/js247DintG pic.twitter.com/eV0C38Z1Nf

Maharashtra Chief Minister Devendra Fadnavis submits his resignation after meeting Governor Bhagat Singh Koshyari at Raj Bhavan. Fadnavis had gone to meet the Governor with all his ministers.

Rajasthan CM Ashok Gehlot says 'false promises' made by BJP to Shiv Sena might be the reason behind the political standoff in Maharashtra even after two weeks of the election result.

Shiv Sena MLAs to be shifted to Madh island resort

Shiv Sena to lodge its MLAs at Hotel Retreat in Madh, Malad West till November 15. Party has written to Mumbai Police Commissioner requesting for security arrangements. 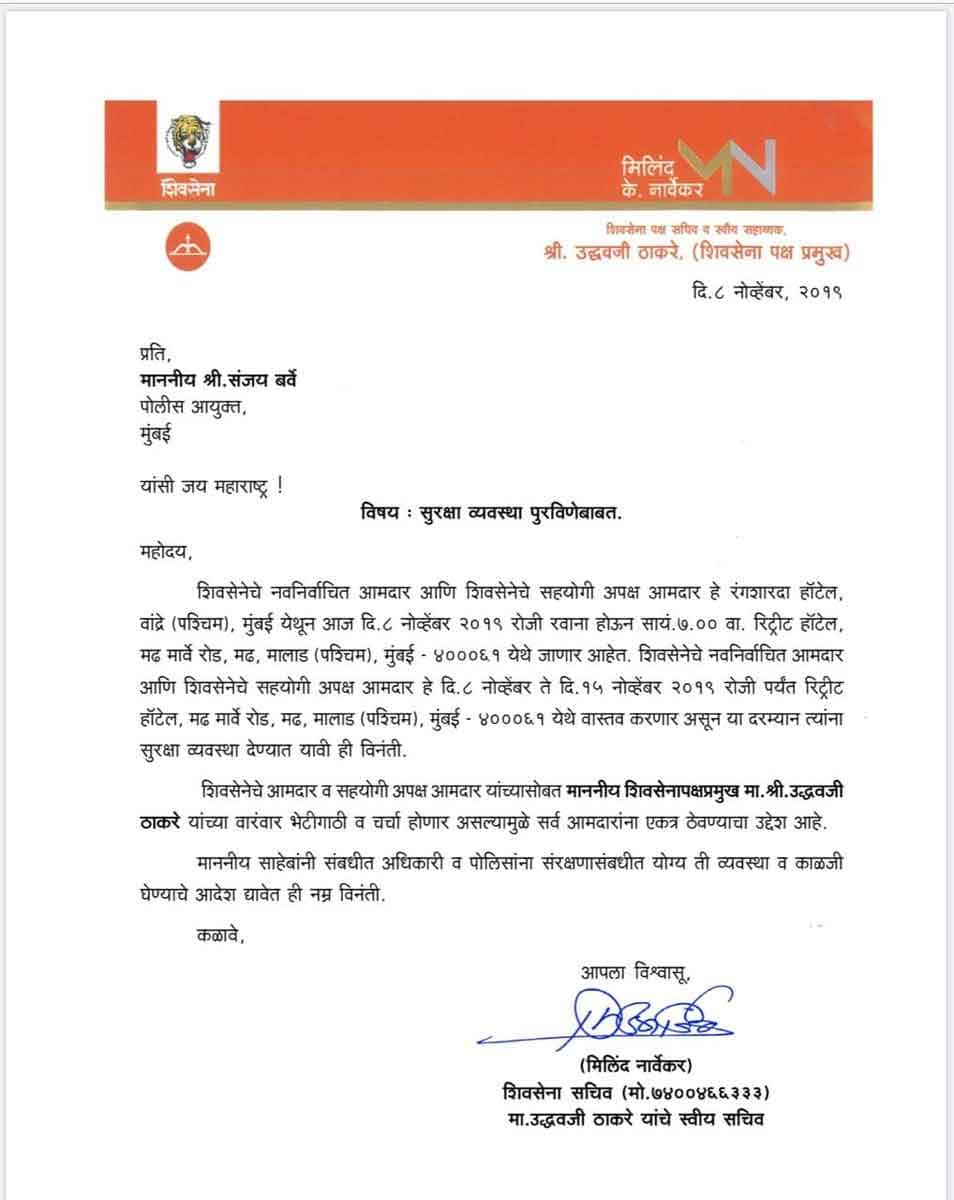 Maharashtra CM Devendra Fadnavis is at Raj Bhavan to meet Governor Bhagat Singh Koshyari. Fadnavis is with his ministers. As per reports, Fadnavis may offer his resignation to the Governor.

CM Devendra Fadnavis will interact with media at 4:30 pm at Sahyadri.

After meeting with RPI chief and Union Minister Ramdas Athawale, NCP chief Sharad Pawar says, "If Mahayuti has got the mandate, then BJP-Shiv Sena should form a government together. NCP cannot do anything in it."

Sharad Pawar: Shiv Sena and BJP have got mandate and they should form govt .This is what Ramdas Athawale ji(RPI Chief) and me have discussed and we agreed on this point . Also, the delay in forming government is affecting the state economically and generally as well. #Maharashtra pic.twitter.com/xRhdJ524jP

BJP leader Sudhir Mungantiwar: Congress and NCP leaders have made allegations of horse-trading against us. They should prove this charge within 48 hours or apologize to the people of Maharashtra.

Sudhir Mungantiwar ,BJP: Congress and NCP have made allegations of horse trading against us, they should prove this charge within 48 hours or apologize to the people of Maharashtra. https://t.co/AAgt26I2se pic.twitter.com/mbDYpzZa6l

In the meeting with Shiv Sena leaders at Shiv Sena Bhavan today, party chief Uddhav Thackeray asked his partymen not to worry over the ongoing political crisis in Maharashtra and said that the next CM in Maharashtra will be from Shiv Sena.

He added that Shiv Sena has made all preparations for it. He also discussed the issues farmers in the state are facing that said that the party has to resolve it.

Maharashtra will not bow down to President's rule: Shiv Sena MLA Sanjay Raut

Nitin Gadkari rejects speculation of meeting Uddhav Thackeray, says 'As per my knowledge, no prior discussion was held on 50-50 seat sharing formula between BJP and Shiv Sena. Government in Maharashtra will be formed under the leadership of Devendra Fadnavis. If needed, I am ready to mediate.

Amid Maharashtra deadlock, social activist Sambhaji Bhide to meet Maharashtra CM Devendra Fadanvis. On Thursday, Bhide had visited Matoshree to meet Sena chief Uddhav Thackeray; However, Thackeray wasn't at home and hence, Bhide, whose arrival was unexpected, could not meet him.

Several other Shiv Sena leaders are also present at Shiv Sena Bhawan to discuss the ongoing political scenario in Maharashtra.

Maharashtra Congress leader Nitin Raut tells ANI, "There were reports that some Congress MLAs were approached by BJP leaders with money. Yesterday one or two of our MLAs were offered around Rs 25 crore. We will do our best to stop the horse-trading pattern that started in Karnataka."

Senior BJP leader and Union Minister Nitin Gadkari has arrived in Mumbai. He is likely to meet Shiv Sena chief to break the deadlock over government formation in Maharashtra.

We have not moved our MLAs anywhere, all our MLAs are at their locations. If some of our MLAs have gone to any place it might be a personal visit, says Vijay Wadettiwar, Congress & leader of opposition in Maharashtra Assembly.

Vijay Wadettiwar, Congress& leader of opposition in Maharashtra Assembly: We have not moved our MLAs anywhere, all our MLAs are at their locations. If some of our MLAs have gone to any place it might be a personal visit. pic.twitter.com/YW87fJNAV5

Shiv Sena leader Sanjay Raut says, "If President's Rule is imposed in the state, it will be disrespect to people of the state."

Reacting to reports about Nitin Gadkari's expected arrival in Mumbai today, Shiv Sena has said that the talk with the BJP would be only on the proposal of CM's chair for 2.5 years.

Union Minister Nitin Gadkari reaches Mumbai. He is likely to hold talks with Shiv Sena chief Uddhav Thackeray to end the deadlock between the allies.

"I am fully sure that BJP will not be able to poach our MLAs...Some Congress leaders who defected before elections are planning to return. The Congress leader also added that whatever decision the party will take, it will be taken along with NCP,'' says  Hussain Dalwai, Congress Rajya Sabha MP.

Congress moves all party MLAs to a resort in Jaipur amid reports of poaching as the deadline for government formation ends today.

Congress party calls a meeting of its MLAs to discuss the political situation in Maharashtra.

According to sources, CM Fadnavis is expected to meet the state's Governor today and resign from his post. However, he is awaiting a nod from the senior leadership of BJP before taking the final decision.

NCP leader Nawab Malik takes a dig at the ruling BJP, says the party is pushing Maharashtra towards President's Rule; PM Modi and Amit Shah want to conquer power from Delhi to Maharashtra.

Devendra Fadnavis is likely to tender his resignation as Maharashtra CM as the incumbent government's term ends on Saturday.

Young Shiv Sena leader Aditya Thackeray met the newly-elected MLAs of his party at a hotel in Mumbai early on Friday as uncertainty over government formation continues to prevail in Maharashtra.