Shiv Sena has approached the Supreme Court seeking urgent hearing against Governor Koshyari for not giving the party 3 days time to cobble up numbers for the government formation. Sena has reportedly sought help of Congress leader Kapil Sibal to plea on its part in the apex court. 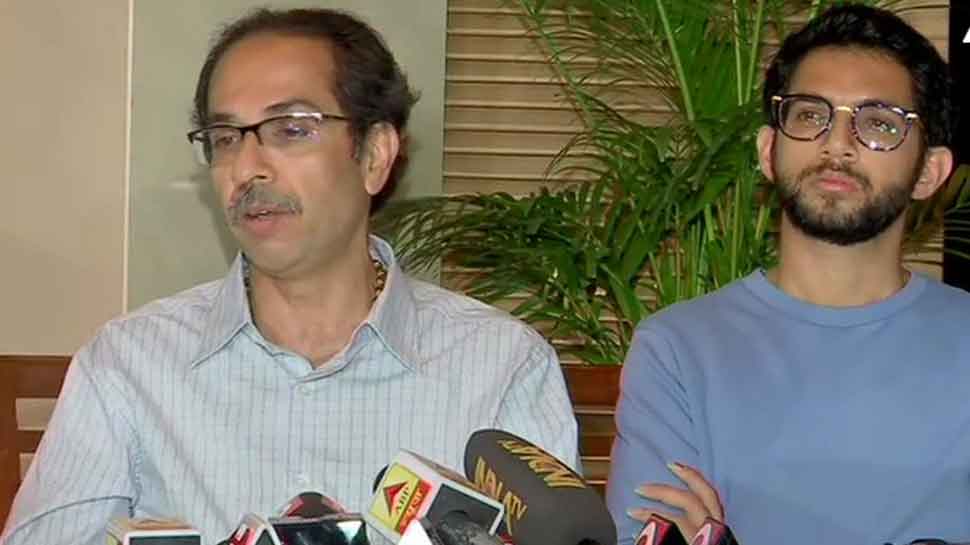 The Maharashtra political drama took a new twist on Tuesday evening as Governor Bhagat Singh Koshyari recommended the imposition of President's Rule in the state and submitted a report in this regard. President Ram Nath Kovind gave nod to impose President’s rule after the Governor’s recommendation. On the development, the Ministry of Home Affairs said that President’s rule in the state is better than uncertainty on the government formation.

In his reports, the Governor has said that for the past 15 days, no political party or alliance partners or Independents came forward with requisite numbers to form the government in the state. Koshyari nullified the 8.30 pm deadline given to the NCP to stake claim to the government, and recommended the President's rule. Earlier, the Union Cabinet in a meet chaired by PM Modi also recommended President’s rule in the state.

Here are the latest updates on political development in Maharashtra:

Thank you for joining Zee News on the live updates

President's rule is unfortunate but we expect that Maharashtra will get a stable government soon, said former Maharashtra CM Devendra Fadnavis through a press statement.

After BJP's core committee meeting, Sudhir Mugantiwar told media persons, "President's rule is definitely something we did not expect. We will certainly try to ensure that people's mandate is respected. We will try to form a stable government. We will stand by the people of the state."

The Shiv Sena-NCP-Congress discussion over government formation is over, sources said on Tuesday. The parties need to agree on certain issues, including secularism and common minimum programme.

Chief Ministers of Shiv Sena and NCP will be on a rotational basis for two and a half years. The Congress will also be part of the government, and Deputy CM from the party for five years, added the sources.

The decision to this effect is likely to be taken within 8 to 10 days, and the official announcement will be made by end of this month.

Uddhav Thackeray reacted to the imposition of President's rule in Maharashtra and said we hope to get a stable government in the state.

MLAs of several parties are in touch with BJP, says Narain Rane

BJP's Narain Rane said, "BJP will keep on trying to form government. Devendra Fadnavis is putting in all efforts in this direction."

Shiv Sena chief Uddhav Thackeray says, "I am not greedy for power."

Uddhav Thackeray said, "BJP-Shiv Sena were together for many years but now Shiv Sena has to go with Congress-NCP.  We'll hold further talks with both of them. I would like to thank Arvind Sawant, many people have lust for ministerial post but he isn't like that. I am proud of him."

Shiv Sena's Uddhav Thackeray said in a press conference "We are still open to other options.''

Uddhav Thackeray said, "Yesterday we formally requested Congress-NCP for their support to form the government. We needed 48 hours, but the Governor didn't give us time."

Shiv Sena's Uddhav Thackeray says "Willing to consider if BJP agrees to our demand'' while addressing a press conference.

NCP chief Sharad Pawar said that yesterday for the first time he had a talk with Uddhav Thackrey. The 3 parties will have to discuss several issues over government formation in Maharashtra.

Congress leader Ahmed Patel said that Maharashtra Governor has made a mockery of democracy.

The way BJP used the Governor to impose President's Rule in Maharashtra is against all constitutional norms and Supreme Court guidelines say Congress leader Ahamed Patel. He added, "Uddhav Thackeray has spoken to Sonia Gandhi, so our leaders are discussing the situation with NCP."

Shiv Sena chief Uddhav Thackeray has assured his MLAs that they should keep patience as the CM will be of our party.

Congress-NCP held a meeting in Mumbai today over the formation of government in Maharashtra. The leaders of both the parties discussed a common minimum program besides deliberating over a join strategy on governance in the state.

The Supreme Court to hear Shiv Sena's petition against Maharashtra Governor tomorrow at 10.30 am, informs Sena's advocate, adding that another plea challenging the President's rule in the state is being prepared and the same is likely to be submitted before the apex court tomorrow.

Congress, NCP to make an announcement for extending support to Shiv Sena for the government formation in Maharashtra. The press conference will be addressed jointly by Sharad Pawar, Mallikaarjun Kharge, Ahmed Patel and KC Venugopal. 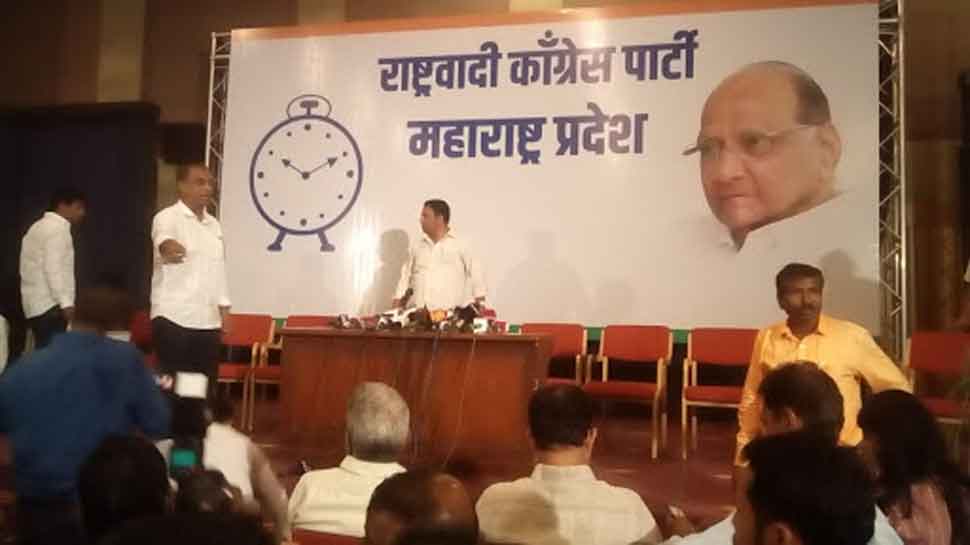 Union cabinet has decided to issue proclamation under article 356 (1) in relation to Maharastra.

Governor has made a mockery of Constitutional process in recommending President’s Rule in Maharashtra, says Congress leader Randeep Singh Surjewala

Governor Koshiyari has committed a grave travesty of the democracy & made a mockery of the Constitutional process in reccomending President’s Rule in Maharashtra.

Four grave violations of the Constitutional Scheme, as expressed in SR Bommai judgment, stand out.
1/3 pic.twitter.com/Ixp0pKF9du

Maharashtra Governor said in his report, "It's been 15 days but I see no party in condition to form a government."

President's Rule in Maharashtra has been implemented for 6 months and it can be withdrawn anytime before that period. Meanwhile, Maharastra Assembly to remain suspended.

Governor said that he made all efforts for the formation of government in Maharashtra, but the situation for stable government was not possible.

President's Rule imposed in Maharashtra after the year 1980.

Shiv Sena lawyers said: Supreme Court Registry has not informed on Shiv Sena's hearing today. Meanwhile, if President's rule is imposed today, a fresh petition will be filed challenging it.

Congress core group meeting will be held on Tuesday at interim party president Sonia Gandhi's residence over the political situation in Maharashtra. Earlier on Monday, NCP had said that it will take a decision on government formation in Maharashtra by Tuesday after holding consultations with its ally Congress. The NCP finished on the third position in the assembly polls having won 54 seats.

Ministry of Home Affairs to brief on governors' recommendation of President's rule in Maharashtra at 5.30 pm. MHA is waiting to get the order signed by the President, who is expected to reach the national capital anytime.

NCP sought more time from Maharashtra Governor for the formation of the government. The NCP request was made prior to the Governor's recommendation for President's rule in the state. The request letter was sent in the name of NCP's legislature party leader Ajit Pawar, said sources.

Governor Bhagat Singh Koshyari sends a report to President saying government in Maharashtra cannot be formed in accordance with the Constitution.

Reports that President's Rule has been recommended by the governor are not correct. There is no such confirmation from Raj Bhavan: NCP

The report of Governor recommending President's Rule is not true as NCP has time till 8:30 pm to give our reply: Nawab Malik

All 54 NCP MLAs attended the meeting. A resolution was passed and Sharad Pawar has been empowered to take a call on government formation in Maharashtra. A committee will be formed to work out the modalities for government formation: NCP's Nawab Malik

As per sources, Shiv Sena is miffed with Governor's haste on recommendation of President's Rule in Maharashtra and has consulted Kapil Sibal to take legal advice.

There's no issue of Congress being late. We have been alert since beginning. We had asked them (NCP) if they've sent a letter to Governor. Things will have to be done simultaneously, they're our partner. Whatever decision is taken,it'll be done together: Sushil Modi

Congress leader Manikrao Thackre says the party is ready to support Shiv Sena and NCP. The party is deciding on the nature of the support. We will make a Common Minimum Program in which the ideology for the development of everyone, along with the people of the entire country, will be decided.