Shiv Sena supremo Uddhav Thackeray on Tuesday staked his claim to form the government in Maharashtra as the leader of Shiv Sena-NCP-Congress alliance.

The month-long political drama in Maharashtra ended on Tuesday (November 26) with the Shiv Sena-Nationalist Congress Party-Congress MLAs electing Uddhav Thackeray as the chief ministerial face of Maha Vikas Aghadi. The Shiv Sena supremo also staked his claim to form the government in Maharashtra before Governor Bhagat Singh Koshyari and he is scheduled to take oath on Thursday (November 28) at Shivaji Park. Speculations are rife that Congress leader Balasaheb Thorat and NCP leader Jayant Patil will also take oath on Thursday as deputy chief ministers of Maharashtra.

A few hours earlier, Bharatiya Janata Party (BJP) leader Devendra Fadnavis stepped down as the chief minister after admitting that he does not have majority in Maharashtra assembly. Fadnavis decided to resign after NCP leader Ajit Pawar quit as the deputy CM, more than three days after dramatically extending support to the BJP. This development took place hours after the Supreme Court ordered a floor test in the state assembly.

The newly-elected MLAs took oath on Wednesday (November 27). BJP leader Kalidas Kolambkar, who was elected Pro-tem Speaker of the Maharashtra Assembly on Tuesday, addministered the oath to the MLAs inside Assembly.

Here are the highlights of the day. Thanks for joining Zee News

Uddhav Thackeray calls up PM Modi, invites him for swearing-in ceremony after sending an invitation card to the PMO office. PM congratulated him. 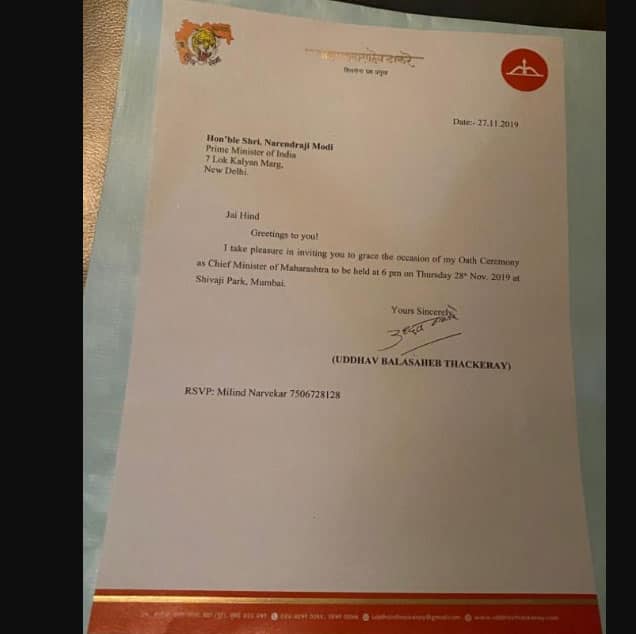 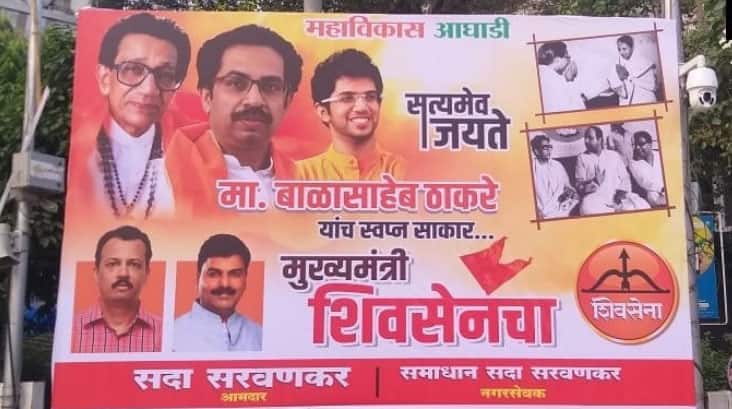 Ajit Pawar to be the Deputy Speaker, Congress leader Prithviraj Chavan to be the speaker, say sources

Congress leader Ahmed Patel after attending the Maha Vikas Aghadi meeting said, ''We have sorted out all the issues, you will get to know tomorrow.''

Posters portraying Ajit Pawar and Sharad Pawar put up in Baramati by Nationalist Congress Party (NCP) workers. Poster states "...let us decide now what you should or should not do. Whole Maharashtra is looking towards you as a future Chief Minister". 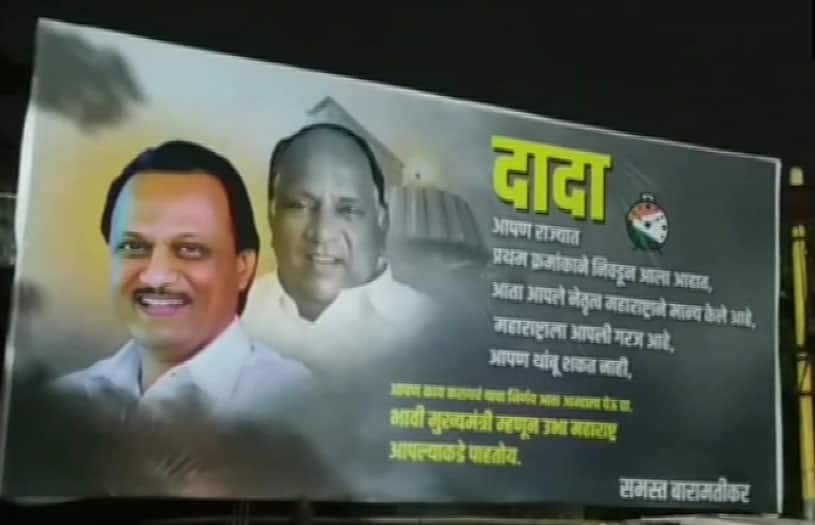 Preparation for swearing-in ceremony underway in Maharashtra, around 2000 police personnel will be deployed at Shivaji Park tomorrow.

Congress' demand for Speaker and Deputy Speaker's post is turning out to be the only bone of contention between the parties: Sources

Amit Shah slams Shiv Sena, questions Is joining any party for the greed of CM post, not a horse-trading?

Around 400 farmers from various districts of Maharashtra have been invited for Uddhav Thackeray's swearing-in ceremony tomorrow, says Shiv Sena leader Vinayak Raut. He added, '' The invitation given to them shows respect for the farmers, the family member of those farmers who committed suicide have also been invited.''

After attending NCP's meeting Ajit Pawar said, ''Chief Minister will take oath tomorrow, I informed our MLAs about that programme and asked them to be present there.''

A special session of Maharashtra assembly to be convened for a day on November 30. The session will also elect full-term Speaker on that day.

My personal opinion is that BJP should not have taken support of Ajit Dada Pawar. He is an accused in the massive irrigation scam and faces many allegations, so we should not have allied with him: BJP leader Eknath Khadse

There are several first-time MLAs and we all felt proud while taking oath. Want to serve people of the state: Shiv Sena leader Aaditya Thackeray

Whatever position the party will give me i am ready to take responsibility: Ajit Pawar on becoming the Deputy CM

NCP is planning to make Ajit Pawar Deputy CM in new government. A final decision in this regard will be taken in a meeting of Shiv Sena chief Uddhav Thackeray, NCP supremo Sharad Pawar and Congress leader Ahmed Patel.

In the end, he admitted his mistake. It is a family matter and Pawar Sahib has forgiven him. He is very much in the party and his position in the party has not changed: NCP leader Nawab Malik on Ajit Pawar

No decision has been taken on who will be the deputy CM: Congress leader Balasaheb Thorat

People were laughing at us when I said we will come to power in Maharashtra, now we have safely landed at the Maharashtra secretariat. Don't be surprised if Shiv Sena lands up in Delhi too: Shiv Sena leader Sanjay Raut

A lot of work is to be done now that oceans have merged, tweets Shiv Sena leader Sanjay Raut

We are happy that finally the dream of Balasaheb ji Thackeray is being fulfilled. 'Maha Vikas Aghadi' will be led by Uddhav Thackeray, guided by Sharad Pawar & Sonia ji madam has made immense contribution to it, so we will do great work for Maharashtra: Shiv Sena leader Neelam Gorhe

NCP leader Rohit Pawar stressed that the Maharashtra Vikas Aghadi government will definitely last for five years. He added that the party is happy that Ajit Pawar has returned to the fold.

We have a lot of new responsibilities. Every citizen of Maharashtra stood by us: NCP leader Supriya Sule

NCP leader Supriya Sule at the assembly in Mumbai: Lot of new responsibility. Every citizen of #Maharashtra stood by us. https://t.co/tvM2SQk8fr pic.twitter.com/tEuvgHTHAD

NCP has not expelled me and I am still with the party: Ajit Pawar

Devendra Fadnavis arrives at the assembly, ahead of the first session of the new assembly today.

Mumbai: Devendra Fadnavis arrives at the assembly, ahead of the first session of the new assembly today. #Maharashtra pic.twitter.com/s4ejZW3GE0

Mumbai: Shiv Sena leader Aaditya Thackeray offers prayers at Siddhivinayak Temple, ahead of the first session of new assembly today. From 8.00 am onwards, oath will be administered to the MLAs in the assembly. #Maharashtra pic.twitter.com/drMVjqOGIy

It's a new morning. The dream came true. We will work for Maharashtra: Supriya Sule

Maharashtra Governor Bhagat Singh Koshyari has called a special session of the Legislative Assembly on Wednesday where 288 newly-elected MLAs will be administered oath by pro-tem Speaker Kalidas Kolambkar. The session will begin at 8 am.

Why should BJP get so desperate for power in Maharashtra? Though we showed the tally of 162 MLAs, their efforts to prove us wrong were hate-worthy. Now, the Fadnavis government has run away without even facing the majority test. No other government or political party was insulted so much in Maharashtra. Ajit Pawar stopped his ‘vastraharan’ in the last stage, but BJP stands completely naked now. An arrogant rampage has stopped in Maharashtra. Now everything will be auspicious:  Shiv Sena said in its mouthpiece Saamana

Maharashtra has refused to buckle under pressure and MLAs have retained their self-respect: Shiv Sena in Saamana