Shiv Sena chief Uddhav Thackeray is likely to stake a claim on Monday to form the government with the support of the NCP. Senior Nationalist Congress Party (NCP) leader Nawab Malik had said on Sunday that the Sena will have to severe its all relations with the BJP to get the support of his party in forming the government in the state.

In a blow to the Bharatiya Janata Party-led (BJP) National Democratic Alliance (NDA), Union Minister of Heavy Industries and Public Enterprises and Shiv Sena MP Arvind Sawant resigned from his ministerial post early on Monday morning. This is a major step as the Shiv Sena is heading towards a separate way from the NDA in Maharashtra.

Shiv Sena chief Uddhav Thackeray is likely to stake a claim on Monday to form the government with the support of the NCP. Senior Nationalist Congress Party (NCP) leader Nawab Malik had said on Sunday that the Sena will have to severe its all relations with the BJP to get the support of his party in forming the government in the state.

A Shiv Sena-NCP government along with a few Independent MLAs and the outside support of the Congress will easily cross the majority mark of 145 in Maharashtra Assembly. While the Shiv Sena has 56 MLAs, it also claims the support of 7 Independents and along with the 54-member NCP and the 44-MLA strong Congress, the group will have 161 legislators on its side.

According to Zee News sources, an agreement has been finalised between the Sena and the NCP during talks held between Thackeray and Sharad Pawar. A day after Governor Bhagat Singh Koshyari invited Shiv Sena, the second-largest party in the state, to indicate its willingness to form the government, Uddhav will meet him on Monday. The Congress will give support to the Shiv Sena-NCP government from outside, said a source.

Several senior Congress leaders will go to Mumbai on Tuesday to meet NCP chief Sharad Pawar for discussion on power sharing arrangement in Shiv Sena-NCP-Congress alliance. Senior leaders of Maharashtra Congress will also be present in the meeting.

It is expected that the discussions will take another day to consolidate into any agreement. According to sources, Congress wants to be remain cautious and not take any decision in haste.

NCP Maharashtra state unit president Jayant Patil says, "Governor of Maharashtra has invited us to indicate a willingness and ability to form the government in Maharashtra as we are the third-largest party in the state. We have been given time till 8:30 pm on Tuesday to inform the Governor."

We will talk to our ally (Congress) and get back to the Governor, says Jayant Patil.

Maharashtra Governor calls NCP leaders for a meeting after refusing to extend deadline given to Shiv Sena for government formation. NCP leader Ajit Pawar gave this information in a press conference.

Congress leader Manikrao Thackeray, says ''Neither ours nor NCP's letter has gone to Maharashtra Governor yet. It has been decided that two leaders will be sent for discussions with Pawar sa'ab (Sharad Pawar), state leaders will also be there. The next step will be taken after the discussion.''

''I believe Maharashtra needs a stable government and Shiv Sena will be able to provide the same'', says Aditya Thackeray. The governor has not given more time Shiv Sena.

Shiv Sena has conveyed to the Maharashtra Governor its willingness to form government. We have sought 48 hours extension for discussion with other parties 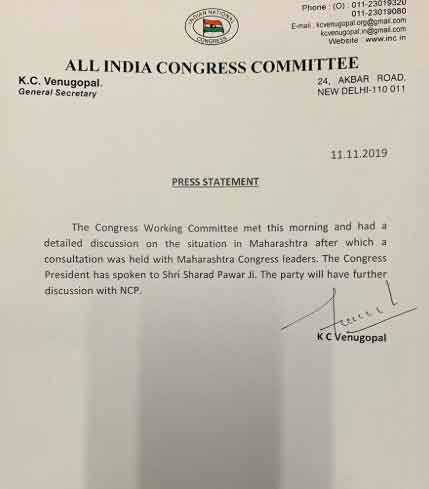 Uddhav Thackeray may take oath as Maharashtra CM on November 17, the seventh death anniversary of Shiv Sena founder Balashaheb Thackeray. The swearing-in ceremoney is most likely to take place at the iconic Shivaji Park.

3 Independent MLAs also reach Rajbhavan, say will do as directed by Uddhav Thackeray.

Shiv Sena gets Sharad Pawar's nod to form government in Maharashtra, official announcement to be made later. This comes after Pawar spoke to Sonia Gandhi on phone.

Priyanka Gandhi also speaks to Maharashtra Congress MLAs lodged in a Jaipur hotel over video call. According to information, most of the MLAs are demanding to be a part of the government while a few want to extend outside support.

Congress Interim President Sonia Gandhi speaks to some party MLAs from Maharashtra who are lodged in a Jaipur hotel: Sources

Shiv Sena leaders are being shifted to another place from The Retreat Hotel, Mumbai. The Shiv Sena leaders were staying there for the past two days. They are likely to be shifted in Hotel Trident. Leaders have started lobbying for the getting ministerial post in the Maharashtra government.

Shiv Sena leader Sanjay Raut admitted to Lilavati hospital, where he will remain for the next few days. Raut has been admitted over complaint of angina (chest pain) in heart.

The doctors at the hospital will conduct an angiography, following which future course of treatment will be decided.

Congress leaders will hold a meeting at Sonia Gandhi's residence over formation of government in Maharashtra. Maharashtra state incharge Mallikarjun Kharge along with all senior leaders of Maharashtra will remain present in the meeting, which will later announce Congress' decision on whether to extend outside support to Shiv Sena led government or be part of it. 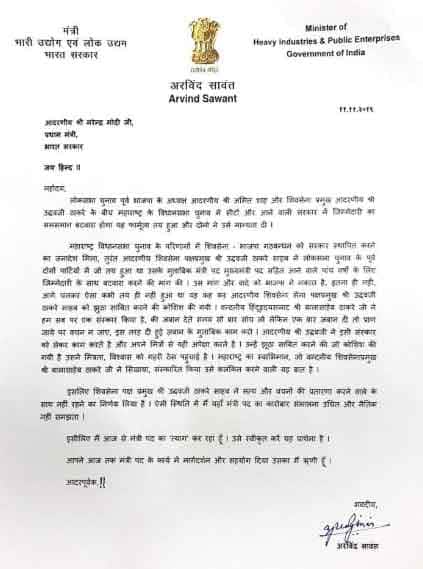 Shiv Sena MP Arvind Sawant, said, ''BJP went back from their pre-election promises. It would not have been morally right for me to continue in the Centre, so I have resigned as Union Minister.''

Shiv Sena leader Arvind Sawant in his press conference address said, ''I lost faith in the government after the political situation following the Maharashtra assembly election. Therefore, I chose to resign.''

Maharashtra Congress leaders leave for Delhi from Jaipur. Prithviraj Chavan, Ashok Chauhan and Vijay Wadettiwar to take part in the meeting in Delhi at 4 pm

Congress will announce its final decision on extending support to Shiv Sena in Maharastra by 5 pm. NCP will also make an announcement 30 minutes later after Congress' decision.

"No decision has been taken in the meeting of Congress leaders which took place at Sonia Gandhi's house. The party has decided that all the senior leaders of Maharashtra will be called to Delhi. All the senior leaders and party leaders of Maharashtra will meet Gandhi at 4 pm and the final decision will be taken in that meeting itself," Congress leader Mallikarjun Kharge after party's Working Committee meeting.

It would have been easy if Governor Bhagat Singh Koshyari had given us more time. BJP was given 72 hours but we've been given lesser time. It's a strategy of BJP to impose President's rule in the state, said Raut on Governor's invitation to Shiv Sena to 'indicate a willingness to form govt in Maharashtra'.

According to the formula finalised for the new government of Shiv Sena and NCP, the following posts with go to the respective parties:

It is BJP's arrogance that they are refusing to form govt in Maharashtra. They are reluctant to follow the 50-50 formula, for which they agreed before polls, says Sanjay Raut.

We are not responible for the political situation in Maharashtra: Shiv Sena leader Sanjay Raut

BJP has insulted the people of Mahrahstra. BJP didn't fulfill its promise, why will there be any ties now, asks Shiv Sena leader Sanjay Raut

BJP is ready to sit in Opposition but not fulfill its promise, says Shiv Sena leader Sanjay Raut addressing a press conference.

If Shiv Sena forms government with NCP, BJP will withdraw its support to the Shiv Sena in the BMC. This means that the BJP will play the role of Opposition in state government as well as in and BMC.

If I care for the journey then the destination will feel bad: Sanjay Raut

"No matter who forms govt and how ? But the political instability in Maharashtra can not be ruled out now. Get ready for early elections. It may take place in 2020.
Can we go to the elections with ShivSena as partner ?" he tweeted.

No matter who forms govt and how ? But the political instability in Maharashtra can not be ruled out now. Get ready for early elections. It may take place in 2020.
Can we go to the elections with ShivSena as partner ?

Shiv Sena chief Uddhav Thackeray expected to meet all the MLAs during the day today.

Congress top brass to meet interim chief Sonia Gandhi at 10am on Monday to discuss the current political situation in Maharashtra.

NCP chief Sharad Pawar called a meeting of party leaders at 10 am and give it's nod in the meet.

Shiv Sena leader Sanjay Raut will address a press conference at 9.30 am.

Congress leader Mallikarjun Kharge said, "There's a meeting at 10 am today. We will proceed according to instruction from high command. But our original decision and decision of the people is that we should sit in opposition, that is the present position."

"Prior to the Lok Sabha elections, the allocation of space and power allocation had become a formula. Both of them were convinced. Now, denying this formula is a formidable threat to the Shiv Sena. BJP has taken a lot of strides in Maharashtra in pursuing falsehood. Shiv Sena's side is the truth. Why stay in Delhi government in such a false environment?
And that is why I am resigning as the Union Minister. In this regard, this morning, at 8.30am. I will be holding a press conference in Delhi," tweeted Sawant.

Shiv Sena MP Arvind Sawant resigns from cabinet ministry, tweeted the Sena leader. He will hold a press conference at 11 am in Delhi. The Sena is heading towards an alliance with the NCP for government formation in Maharashtra.

Sena leader Sanjay Raut is likely to meet top Congress leaders and interim chief Sonia Gandhi in the national capital on Monday to seek support for his party-led government in the state.

According to Zee News sources, an agreement has been finalised between the Sena and the NCP during talks held between Thackeray and Sharad Pawar. A day after Governor Bhagat Singh Koshyari invited Shiv Sena, the second-largest party in the state, to indicate its willingness to form the government, Uddhav will meet him on Monday. The Congress will give support to the Shiv Sena-NCP government from outside, said a source.

A meeting took place between the Sena leaders till late night at Uddhav Thackeray's residence 'Matoshree' in Mumbai. Several Shiv Sena leaders--Uddhav Thackeray, Aditya Thackeray, Eknath Shinde, Anil Desai, Milind Narvekar and Priyanka Chaturvedi had a meeting for three-and-a-half hours. After the meeting, the leaders didn't talk to the media. The meeting started around 11 pm and ended at around 2.30 am.

Shiv Sena chief Uddhav Thackeray is likely to stake a claim on Monday to form the government with the support of the Nationalist Congress Party (NCP).