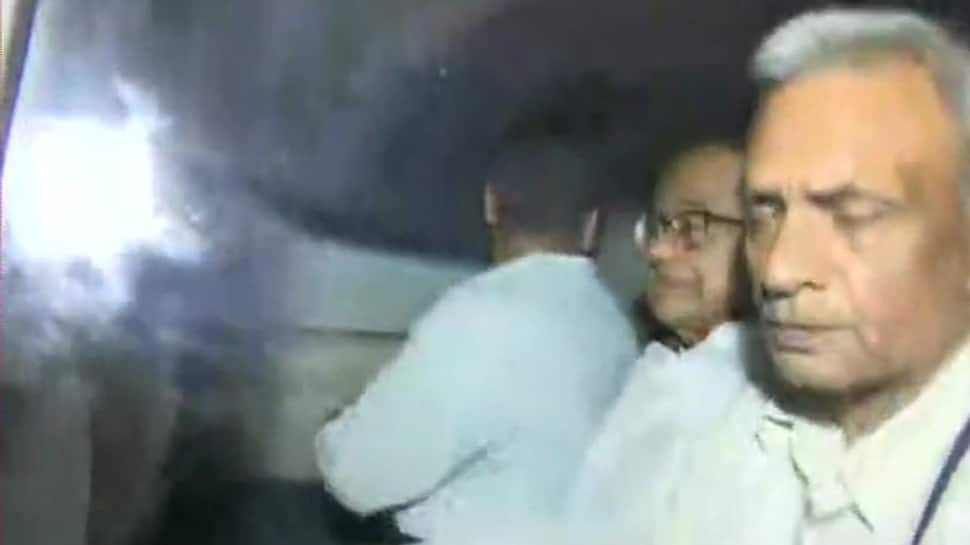 New Delhi: Former finance minister and senior Congress leader P Chidambaram was detained by the Central Bureau of Investigation on Wednesday night after hours of high drama. Missing for nearly 25 hours, the Congress leader had surfaced at Congress headquarters in Delhi and addressed a press conference defending himself.

The Chief Justice of India earlier turned down former Chidambaram's urgent bail plea. The CBI and the ED have also filed a caveat in the top court, asking it to hear their side before deciding on Chidambaram's plea.

From Tuesday night till Wednesday morning, two separate teams of Central Bureau of Investigation (CBI) and Enforcement Directorate (ED) reached his residence in Delhi's Jor Bagh. However, the teams were unsuccessful in meeting the Congress leader who is likely to be arrested in the case anytime soon.

On not finding him, the CBI then pasted a notice on his residence asking him to appear before them in the next two hours. On Tuesday, the Delhi High Court had dismissed Chidambaram`s both anticipatory bail pleas in connection with INX Media case.

"Whereas it appears that you are acquainted with the facts and circumstances of the case noted below, which I am now investigating under Chapter XII of the Code of Criminal Procedure, you are hereby directed to attend before me within two hours of the receipt of this notice for the purpose of investigation of case," read the notice to Chidambaram by investigating officer R. Parthasarathy, Deputy Superintendent of Police, CBI.

Chidambaram`s legal team, consisting of top lawyers Kapil Sibal and Abhishek Manu Singhvi, is likely to approach the senior-most judge of the Supreme Court on Wednesday to seek a stay of the High Court order.

Tune in to Zee News for latest updates on INX media case:-

Thank you for staying with us the live updates. For the latest news updates, click here.

Read: P Chidambaram arrested in INX Media case, to be produced in court on Thursday

"The drama and spectacle being enacted by the agencies is to simply sensationalise and satisfy the voyeuristic pleasure of some," tweets Karti P Chidambaram.

Nearly 20 to 25 officers, who'd left for the day, have now reached the CBI headquarters. Delhi Police personnel are standing alert outside the HQ.

This is the first instance of a former Finance Minister being arrested from his home in Independent India.

Chidambaram will now spend the night in the CBI headquarters. CBI Director and Joint Director policy already present at the premises.

"This is a politically motivated witchhunt. I was raided four times for events which happened in 2008. No one in the history of India has been raided so many times.  The whole thing is being played for voyeurism," said P Chidambaram's son Karti Chidambaram.

The CBI vehicle arrives at headquarters of the probe agency. Massive commotions ensue.

Chidambaram is seated at the backseat of the SUV, sandwiched between two CBI officials. The vehicle is now heading towards CBI headquarters in the national capital.

#WATCH P Chidambaram taken away in a car by CBI officials. #Delhi pic.twitter.com/nhE9WiY86C

CBI vehicle enters Chidambaram's home. The team of officials have been at the Congress leaders residence for nearly 20 minutes now.

Chidambaram leaves from the Congress headquarters. Congress workers protest outside the office.

"We are together. We respect Chidambaram. He has served the nation. We are proud of him. This is a moment of sadness. He has shown his level of maturity in this distressed situation. These allegations have no grounds," says Salman Khurshid.

On the INX case, Chidambaram says, "My name is not even in the FIR. These are just lies being spread from pathological liars. I sought protection from court from arrest which was awarded by high court. I enjoyed this protection for 15 months. Yesterday they dismissed the appeal. We moved SC for interim protection from arrest. I was working with my lawyers whole yesterday night. Today I was in court proceedings. I was not running away. I was seeking protection. My case will be heard on Friday. I bow down to the court, I respect the law. I request the agencies to respect the law as well. I have full faith in democracy."

Article 21 is the most precious tool. For freedom we must struggle, to preserve freedom you must struggle. In last 24 hours, there has been a threat to this freedom: Chidambaram

A team of CBI officials reached the Congress headquarters after Chidambaram leaves premises.

In last 24 hours.  much has happened that has caused concern to some and confusion to many. In INX Media case, I've not been accused of any offence nor any one else including any member of my family. There is no charge sheet filed by either ED or CBI before a competent court: Chidambaram

I believe that the foundation of a democracy is liberty, most precious article of the constitution is Article 21 that guarantees life and liberty. If I'm asked to choose between life and liberty, I will choose liberty: Chidambaram.

The case has been listed for Friday, and until then I will wait for justice: Chidambaram

Aghast of being accused of running away from law, on the contrary I was seeking the protection of law: Chidambaram

Supreme Court will hear P Chidambaram's plea for protection against arrest on Friday.

No urgent hearing of Chidambaram's bail plea in the Supreme Court on Wednesday.

MK chief M K Stalin on Thursday said that there is a political vendetta behind actions of the ED and CBI against Chidambaram in the INX media case. "P Chidambaram is an expert in law and he is able to come out of this situation legally. I think that the actions by CBI and ED are due to political vendetta," he said, reported ANI.

Chidambaram's lawyers can again approach Chief Justice of India to request that the matter be listed.

The registrar tells Justice Ramana that the defect in the petition has been cured but only Chief Justice will decide as to when the where the matter will be listed. Justice Ramana says the plea cannot be heard unless the matter is listed.

Chidambaram's lawyer Kapil Sibal tells the court of Justice NV Ramana that they have come back to him as they have no other option. Sibal also complained about the matter not being listed by the SC registry, responding to which the judge said that it was because of the defect in the petition.

Former Congress president Rahul Gandhi comes out in support of Chidambaram, accusing the government of using the Enforcement Directorate and the CBI to "character assassinate" the former Union minister. "I strongly condemn this disgraceful misuse of power," he says in a tweet. READ FULL STORY

The CBI has filed a caveat in the Supreme Court, asking the court to hear their arguments before taking any decision on Chidambaram’s plea seeking protection from arrest.

Congress leader Sanjay Nirupam has accused the Modi govt of treating P Chidambaram - a senior politician - like a thief.

Look out notice for P. Chidambaram ?
It sounds a bit too much.
Country’s scholarly politician, former Home minister and Finance minister being treated like a thief.
This is not good at all.

The matter of anticipatory bail for Chidambaram is likely to be mentioned in the court of CJI Ranjan Gogoi at around 1 pm. With the CJI court hearing Ayodhya case at present, the matter could not be listed immediately.

The SC bench has directed P Chidambaram to approach CJI for a stay on his arrest in the INX Media case.

Judge reserves judgement for 7 months & delivers it 72 hours before retirement, CBI/ED are sent to raid as
a respected former FM is hounded.

Senior Congress leader Jairam Ramesh has also jumped in the defence of P Chidambaram, saying his credibility is unquestionable as he has worked closely with him since 1986.

I have worked very closely with @PChidambaram_IN since 1986 and couldn't agree with @priyankagandhi more https://t.co/uZWC1f0dVw

I condemn the action of CBI against Chidambaram in a case where he is not mentioned in the FIR nor is there any evidence against him. It is sheer Political Vendetta.

P Chidambaram's legal team gathers at Kapil Sibal's residence ahead of the SC hearing on a plea filed by the former Home Minister in INX Media alleged corruption case.

Priyanka Gandhi slams CBI action against P Chidambaram in INX Media case. ''An extremely qualified and respected member of the Rajya Sabha, Chidambaram Ji has served our nation with loyalty for decades including as Finance Minister & Home Minister. He unhesitatingly speaks truth to power and exposes the failures of this government but the truth is inconvenient to cowards so he is being shamefully hunted down. We stand by him and will continue to fight for the truth no matter what the consequences are.''

An extremely qualified and respected member of the Rajya Sabha, @PChidambaram_IN ji has served our nation with loyalty for decades including as Finance Minister & Home Minister. He unhesitatingly speaks truth to power and exposes the failures of this government,
1/2

but the truth is inconvenient to cowards so he is being shamefully hunted down. We stand by him and will continue to fight for the truth no matter what the consequences are.
2/2

According to news agency ANI, a three-member CBI team has reached P Chidambaram's Delhi residence. However, the Congress leader could not be traced and remains incommunicado.

Delhi: A Central Bureau of Investigation (CBI) team arrives at the residence of P Chidambaram. Yesterday, Delhi High Court had dismissed his both anticipatory bail pleas in connection with INX Media case. pic.twitter.com/t2kvpNfxCC

He has been permitted by SC to mention the urgent Special Leave Petition against the order before Court at 10:30 am today. I, therefore, request you not to take any coercive action against my client till then and await the hearing at 10:30 AM: Arshdeep Singh Khurana

My client is exercising the rights available to him in law & had approached the Supreme Court on August 20 seeking urgent reliefs in respect of the order dismissing his anticipatory bail (in INX media case): Arshdeep Singh Khurana, lawyer of P Chidambaram.

Arshdeep Singh Khurana, P Chidambaram's lawyer, has written to CBI after the agency put up a notice outside his residence.