Rahul Gandhi along with with other opposition leaders left for Kashmir onboard a Vistara flight from the national capital around 11.40 AM. This comes weeks after the Centre abrogated Article 370, the special status given to the erstwhile state of Jammu and Kashmir. 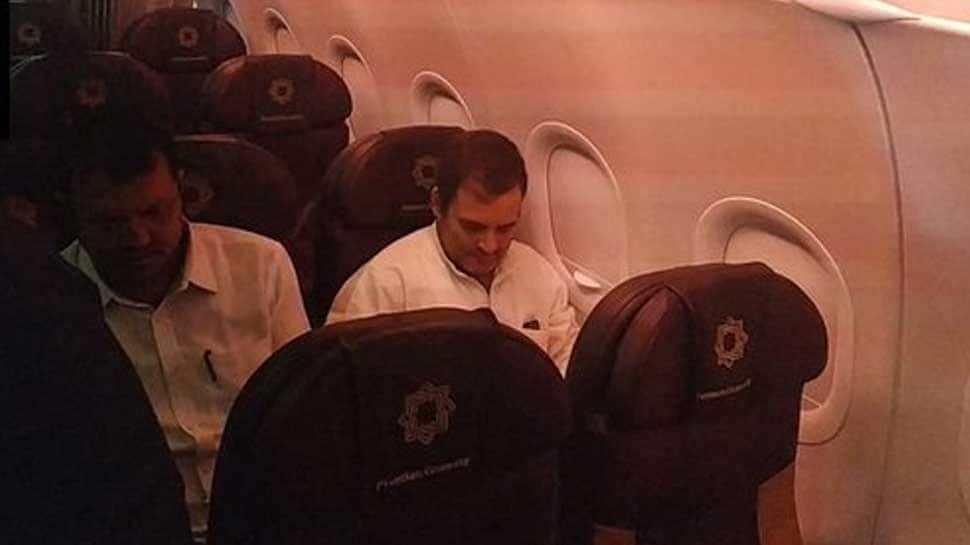 SRINAGAR: Congress leader Rahul Gandhi and other opposition leaders were on Saturday not allowed to enter Srinagar in Jammu and Kashmir. Notably, prior to the opposition leaders leaving for Srinagar, the government had said their visit would create law and order situation in the region.

The former Congress president went to Srinagar along with 11 other opposition leaders across party lines. They left for Kashmir onboard a Vistara flight from the national capital around 11.40 AM.

This comes weeks after the Centre abrogated Article 370, the special status given to the erstwhile state of Jammu and Kashmir.

On August 13, Rahul had accepted an “invitation” extended by Jammu and Kashmir Governor Satya Pal Malik to visit the region, which is currently under an unprecedented security cover. Responding to Malik’s statement wherein he said that he would send an aircraft for the former Congress chief to visit Jammu and Kashmir and see the prevailing situation for himself, Rahul said that instead of the aircraft, he would need “freedom” to travel and meet people.

Taking to microblogging site Twitter, the Gandhi scion shared a report where Malik was quoted as saying that he had invited Rahul to the Valley. The Congress leader tweeted that he would accept the “gracious invitation” and would want to meet common people, political leaders and soldiers deployed.

Tune in to Zee News for live updates on Rahul Gandhi's J&K visit:-

Rahul Gandhi and other opposition leaders not allowed to enter Srinagar. The government had said that their visit to Kashmir might lead to law and order situation in the region.

The J&K Police said that visiting Opposition leaders won't be allowed to enter Srinagar. They will be asked to return back from Srinagar airport, sources said.

Congress leader Rahul Gandhi onboard flight to Srinagar. A delegation of Opposition leaders, including Rahul Gandhi, will arrive in Jammu & Kashmir later today.

On one hand, the government says the situation is normal, and on the other, they don't allow anyone to go. Never seen such contradictions. If things are normal then why political leaders are under house arrest: Ghulam Nabi Azad, who is part of Opposition delegation which will visit J&K today.

"At a time when the government is trying to protect the people of Jammu & Kashmir from the threat of cross border terrorism and attacks by militants and separatists and gradually trying to restore public order by controlling miscreants and mischief mongers, attempts should not be made by senior political leaders to disturb the gradual restoration of normal life. Political leaders are requested to cooperate and not visit Srinagar as they would be putting other people to inconvenience. They would also be violating restrictions that are still there in many areas. Senior leaders should understand that top priority would be given to maintaining peace, order and preventing loss of human lives," J&K administration said in a tweet.

Taking to Twitter, the Department of Information and Public Relations also asked the senior leaders to understand that the priority should be maintaining peace, order and preventing loss of human lives.

It also added that the senior political leaders should not make attempts to disturb the gradual restoration of normal life.

Reacting on the visit, the J&K administration has asked the opposition delegation not to visit Srinagar as they would be jeopardizing the convenience of the people.

Ahead of Rahul Gandhi's J&K visit, the advisor to Jammu and Kashmir Governor Satya Pal Malik, KK Sharma has said that the government had put in place a "comprehensive mechanism" for immediate redressal of public grievances.