While the hoarding carried Sonia’s picture prominently, at the top of it there were photographs of Rahul Gandhi, Robert Vadra and his wife Priyanka Gandhi Vadra. 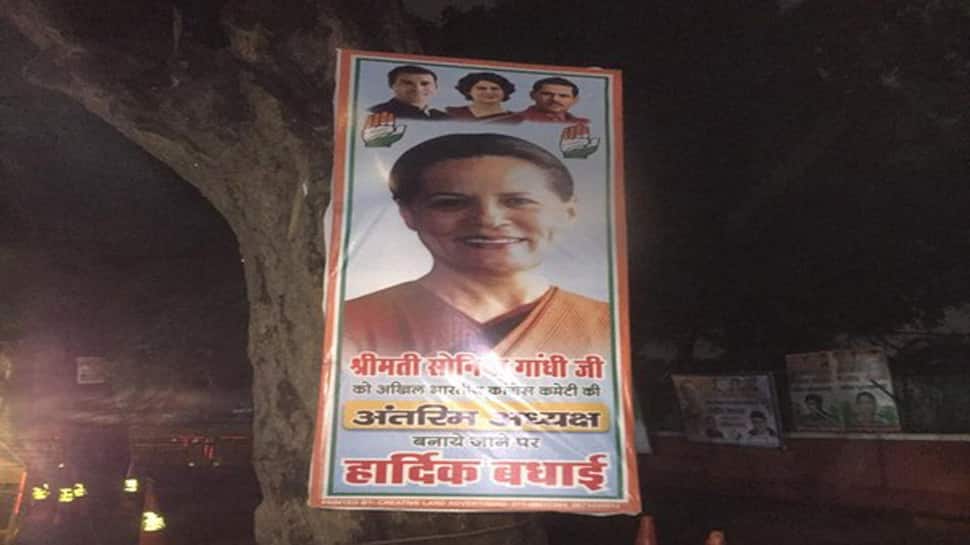 There seems to be no end to the love for Gandhi family within the Congress fold. Days after the Congress Working Committee (CWC) selected Sonia Gandhi as the interim party president, postures congratulating her appeared outside the party headquarters in the national capital on Tuesday.

But what stood out in one of the posters was photograph of Sonia Gandhi’s son-in-law Robert Vadra. While the hoarding carried Sonia’s picture prominently, at the top of it there were photographs of former Congress chief Rahul Gandhi, Robert Vadra and his wife Priyanka Gandhi Vadra, who is a general secretary of the grand old party.

The text on the hoarding read, “Heartiest congratulations to Sonia Gandhi ji for becoming the interim chief of All India Congress Committee.”

The appearance of Robert Vadra on the poster is likely to provide political rivals of the Congress fresh ammunition to launch yet another attack on the grand old party, which has often been under attack over dynasty politics.

Ahead of the Lok Sabha elections 2019, when Rahul Gandhi filed his nomination paper from Amethi in Uttar Pradesh, the Congress was attacked for Robert Vadra accompanying the then party chief in his roadshow.

Several leaders of the Bharatiya Janata Party (BJP) had targeted Rahul Gandhi and the Congress, saying the party was merely interested in worshipping the Nehru-Gandhi family. They had also targeted the Congress over party’s general secretary Jyotiraditya Scindia being made to sit in a car and Vadra being atop a decorated vehicle with Rahul Gandhi and Priyanka.

Sonia Gandhi was made the interim chief of the Congress after days of leadership vacuum following Rahul Gandhi’s resignation. Taking responsibility for debacle in the Lok Sabha election, Rahul resigned as the party president. Despite repeated attempts by all senior leaders, he refused to relent and maintained that a new president must be chosen.

Though he asserted that his successor must not hail from the Gandhi family, the CWC ended up choosing Sonia as the interim chief. During discussions over the new president, Rahul Gandhi had categorically dismissed the suggestion to make Priyanka Gandhi Vadra the new Congress chief.