A major Naxal attack on security forces was averted on Sunday thanks to the alertness of local administration in Raynar Batumpara area of Narayanpur district in Chhattisgarh. 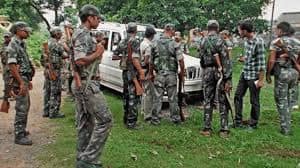 Narayanpur: A major Naxal attack on security forces was averted on Sunday thanks to the alertness of local administration in Raynar Batumpara area of Narayanpur district in Chhattisgarh.

According to police, around 50 armed Naxalites had formed an L-type ambush for inflicting maximum damage on security forces during Sahid Saptah (Martyrs` week) which is being observed by the CPI-Maoist.

Acting on intelligence inputs, the police formed a joint team of the District Reserve Guard (DRG), the Chhattisgarh Armed Force (CAF) and some policemen and launched an operation to clear the area from Naxals.

When the team reached Raynar Batumpara area at around 11:30 am, Naxals detonated two IEDs and started indiscriminate firing. "The police team was swift and alert and reacted immediately resulting in an exchange of fire for about 40 minutes after which Naxalites fled taking advantage of heavy rains, forests, and mountains," said Narayanpur Superintendent of Police Mohit Garg.

No injury to security personnel or civilian was reported.