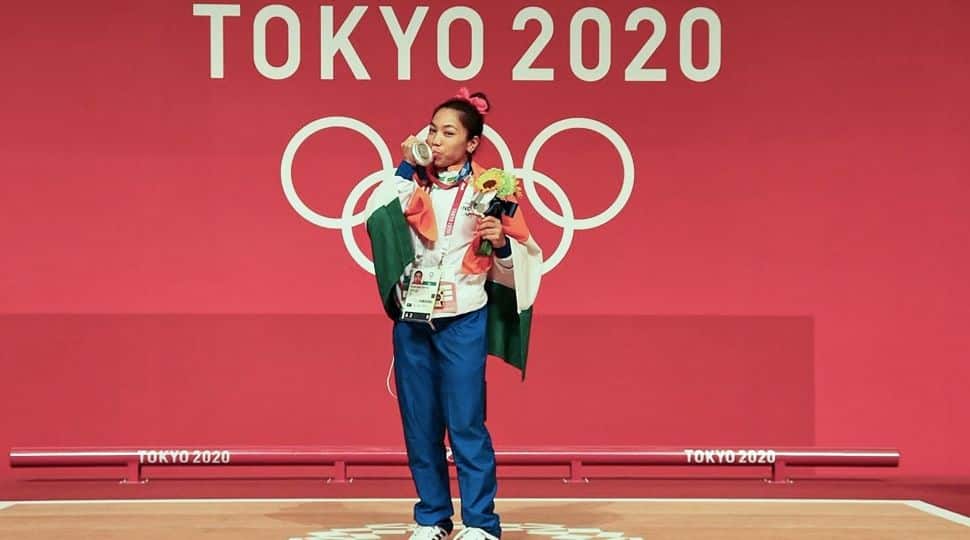 New Delhi: Indian weightlifter Mirabai Chanu has created history by winning a silver medal at the Tokyo Olympics 2020 while competing in the women's 49kg category. As entire India is celebrating her achievement, Mirabai Chanu in an exclusive interview with WION, has opened up about her life, her journey till the Tokyo Olympics.

She lifted a total of 202 kg (87kg in snatch and 115kg in clean and jerk) during her four successful attempts. Chanu while talking to WION said, "I came here after years of hard work and when I stood on the podium, I forgot about the fatigue for some time as it's like a dream come true."

China's Hou Zhihui set an Olympic record with a lift of 210 kgs (94+116) and won a Gold medal. Indonesian weightlifter Aisah Windy Cantika lifted 194 kgs (84+110) and went on to achieve a Bronze medal.

Mirabai Chanu lifted 84kg and 87kg successfully. In her first attempt, she lifted 84kg in the snatch segment and went on to improve with an 87kg lift. However, she could not lift 89 kg as she was placed in the second spot.

Mirabai Chanu has created history in Indian sports as her win came twenty years after Indian trailblazer Karnam Malleswari became the first Indian woman to win an Olympic Bronze medal while competing at the Sydney Games (2000) in the women’s 69kg weight category. On being asked about her performance, Chanu said, "When I go for the lift, I think about focussing on giving my best performance and if everything goes as planned, the medal will automatically come."

Could not have asked for a happier start to @Tokyo2020! India is elated by @mirabai_chanu’s stupendous performance. Congratulations to her for winning the Silver medal in weightlifting. Her success motivates every Indian. #Cheer4India #Tokyo2020 pic.twitter.com/B6uJtDlaJo

Prime Minister Narendra Modi wrote: "Could not have asked for a happier start to Tokyo2020! India is elated by Mirabai Chanu's stupendous performance. Congratulations to her for winning the Silver medal in weightlifting. Her success motivates every Indian."

Mirabai Chanu said that now, she wants to go home as she has not been able to due to the preparation for the Olympics. She further added by saying that she will continue to train as there is a lot yet to achieve.