The fire broke out on the first and second floor of the hospital building near the emergency ward. 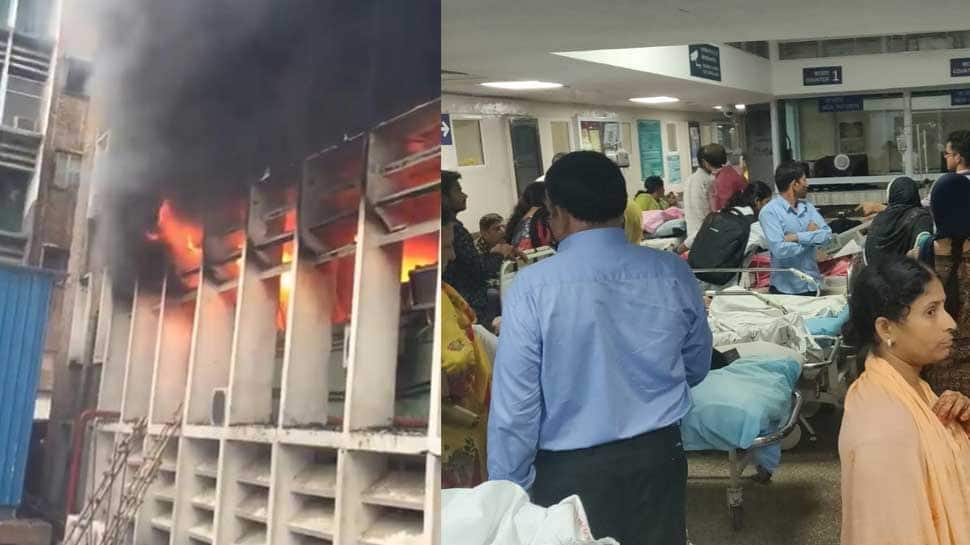 NEW DELHI: A massive fire, which broke out near the emergency ward of the All India Institute of Medical Sciences (AIIMS) in Delhi on Saturday, was contained after nearly six hours of firefighting by Delhi fire brigade and NDRF officials

News agency ANI quoted Delhi Fire Services and AIIMS Fire Division as saying that the massive fire has been put off completely.

Delhi Fire Service Director, Vipin Kental on fire at All India Institute of Medical Sciences (AIIMS) Delhi: Fire is completely under control. Cooling operation is underway, they'll continue for some more time, the staff will be here to monitor that. No casualty has been reported. pic.twitter.com/TFzvl80qQ2

The devastating blaze that broke out on the first and second floor of the Teaching Block of AIIMS had spread to the 5th floor of the building triggering panic among the patients and AIIMS staff.

The Microbiology Department's virology unit on the second floor of the Teaching Block was completely gutted due to the blaze.

Several teams of the National Disaster Response Force (NDRF) were called in to help in the firefighting operation.

The Delhi Fire Department had earlier said that the blaze had been brought under control by its firefighters and the cooling process was on. However, it soon spread to other areas of the building.

The AIIMS authorities issued a helpline number -  011-26593308 - for more information about the patients who have been shifted to other departments due to massive blaze.

In a statement released by AIIMS, Dr Aarti Vij, Chairperson of Media Division said, “As a precautionary measure, the patients admitted in adjoining AB Wing have been shifted out to the other wings of the hospital temporarily. Information regarding them can be obtained from the Control Room - 011-26593308.”

In a tweet, Union Health Minister D Harsh Vardhan called the incident of fire at AIIMS ''unfortunate'' but expressed satisfaction that there has been no loss of life so far. The Minister said that he was personally monitoring the developments there.

The Health Minister also ordered a special fire audit to ascertain the cause of the fire. ''AIIMS, Delhi regularly does this exercise, however, a more comprehensive special audit will be conducted,'' he said.

The Teaching Block is a non-patient block consisting of research labs, doctors rooms etc, however, it is interconnected to the Emergency Wing of the hospital.

A total of 34 fire tenders were immediately rushed to the spot and pressed into service to douse the fire.

Fire Department officials said that they received a call at around 4.50 PM informing them about the incident.

A blast in AC chamber possibly led to a short circuit, which is believed to have caused the massive blaze.

As a precautionary measure, the Emergency Lab was immediately shut due to the massive fire.

Areas which were affected by the fire included the Emergency Lab, B block of the area, Ward AB1, and Superspeciality OPD Area of the institute.

Doctors on duty said that patients were being shifted to safer places from the Emergency department.

Delhi: Patients are being shifted from AB ward (Orthopaedic Unit), after a fire broke out in PC block near the emergency ward on the 2nd floor at All India Institute of Medical Sciences (AIIMS). No casualty reported till now. pic.twitter.com/MDvvQH2NpK

There was no report of any casualty due to the devastating fire.

It may be recalled that former Union Minister Arun Jaitley is presently undergoing treatment at the institution. The AIIMS officials maintained that the ward where Jaitley is admitted was unaffected by the blaze.