"What about mob lynching which brought bad name to the country?" 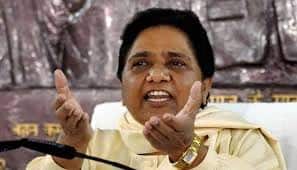 Mayawati on Thursday launched a scathing attack on Yogi Aditynath for claiming that there had been no riots in Uttar Pradesh since he took over as the chief minister. Calling it a farce, the BSP chief attempted to point fingers at Adityanath over incidents of mob lynching.

The Adityanath government completed two years earlier this week and the CM had spelt out a list of achievements since he took charge. Among these, he prominently mentioned that no riots had taken place in the state. It is a claim that Mayawati aimed to puncture in a tweet thread that originally began with Holi greetings. "BJP's claim that UP remain riot-free in past 2 years is farce. During the period BJP leaders & ministers remain awfully busy in lifting of heinous cases against them," she wrote. "And what about mob lynching etc which brought bad name to the country and ultimately Hon court had to intervene."

Warm & heartfelt greeting & best wishes on the occasion of Holi. Celebrate Holi with full festivity but try not to forget poor around you to double the happiness & also also cast your invaluable vote to fulfil the constitutional obligation as LS elections is on in the meantime.

Mayawati had time and again hit out at the Adityanath government and said that it is ineffective in controlling crime in the state. Previously, she has also targeted the CM of protecting cow vigilantes. In September of last year, she had said that mob lynching incidents in the state are either committed or supported by BJP followers.

The charges and counter-charges are only expected to further intensify with Lok Sabha election less than a month away. Mayawati has joined forces with nemesis Akhilesh Yadav of Samajwadi Party in a bid to defeat BJP in UP. In return, BJP leaders have termed it an 'unholy' alliance that would be rejected by voters.