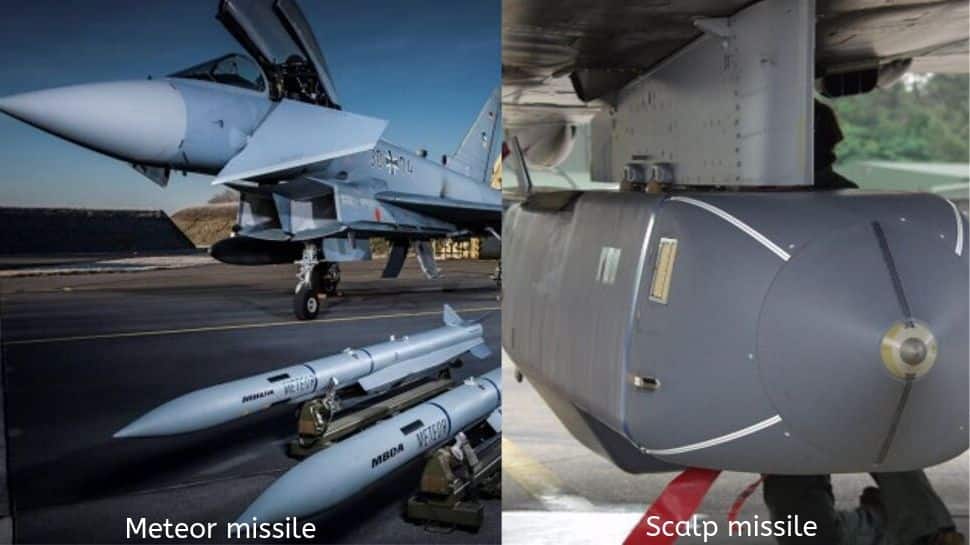 Rafale, IAF's most advanced fighter, will be formally joining the force on October 8 which is not only the Air Force Day but also Dussehra. Along with the air dominance Sukhoi Su-30MKIs, Rafale omnirole fighter will give the IAF an extremely potent combination to deal with any threat from across India's western as well as northern borders.

The French combat aircraft is not only one of the most advanced 4++ Generation fighter but also packs a lethal punch with an array of missiles and bombs, including MBDA's deadly Meteor and Scalp as part of the Rafale weapons package. While Meteor is the world's best Beyond Visual Range Air-to-Air Missile (BVRAAM), the fire-and-forget Scalp is a long-range, air-launched, stand-off attack missile which can penetrate deep into hard rock and fortified targets.

With a range of 150 kilometres and a No Escape Zone of more than 60 km which is the largest among all similar missiles currently in service with the air force around the world, Meteor is the leader in the BVRAAM category. Capable of being fired in all-weather conditions, Meteor missile has an advanced active radar seeker which can lock on to highly manoeuvrable fighters as well as small Unmanned Aerial Vehicles and cruise missiles. Designed to beat even the most severe countermeasures employed by the enemy, Meteor has a data link communication and can also be operated using third party data.

The 190-kilogramme missile is 3.7 metres long with a diameter of 178 mm. Powered by a ramjet propulsion system which uses solid fuel, variable flow, ducted rocket, the missile is propelled towards its target at 4939 kmph (Mach 4). It is armed with impact as well as proximity fuses and fragmentation warhead that detonates on impact or at the optimum point of intercept to maximise lethality.

The 5.10-metre long and 1300 kilogramme heavy Scalp is perfectly suited for taking out high value fixed or stationary targets on land from over 300 kilometres away. According to its manufacturer MBDA, Scalp has a wingspan of 3m with a diameter of 0.48m. The missile can operate "in extreme conditions", is highly flexible with "deep-strike capability based around a sophisticated mission planning system". The subsonic missile which can fly at 988 kmph ( Mach 0.8) has been used in the Gulf wars, Iraq and Libya.

Once fired, Scalp missile descends to a low cruising altitude powered by a Turbomeca Microturbo TRI 60-30 turbojet engine guided by Inertial Navigation, GPS (Global Positioning System) and Terrain Reference Navigation, which ensures it can be guided over land as well as water, even in the most severe counter-measures environments. Scalp's three-level navigation system also ensures that the missile in extremely accurate and is able to hit the target with high precision.

Equipped with an imaging infrared seeker that is activated during the final target approach phase, Scalp's automatic target recognition algorithms then compare the real scene with the pre-programmed target, in order to hit exactly where required. Alternatively, Scalp also has an Attack On Co-ordinate capability for missions where time is a premium.

Scalp carries a two-stage 450 kg warhead known as Bomb Royal Ordnance Augmented Charge (BROACH) blast/ penetrator. Once the missile nears the target, it climbs and then takes a semicircular dive called bunt to identify the intended strike area and ensure maximum penetration. The first stage of the warhead then cuts the surface of the target to make way for the second and main bomb. The second warhead detonates after penetrating into the target.

Will not cut any more trees in Aarey, we respect SC's decision: Mumbai metro authority