After two days of incessant rain which threw normal life out of gear, Mumbai is all set to receive another bout of heavy rainfall on Sunday. 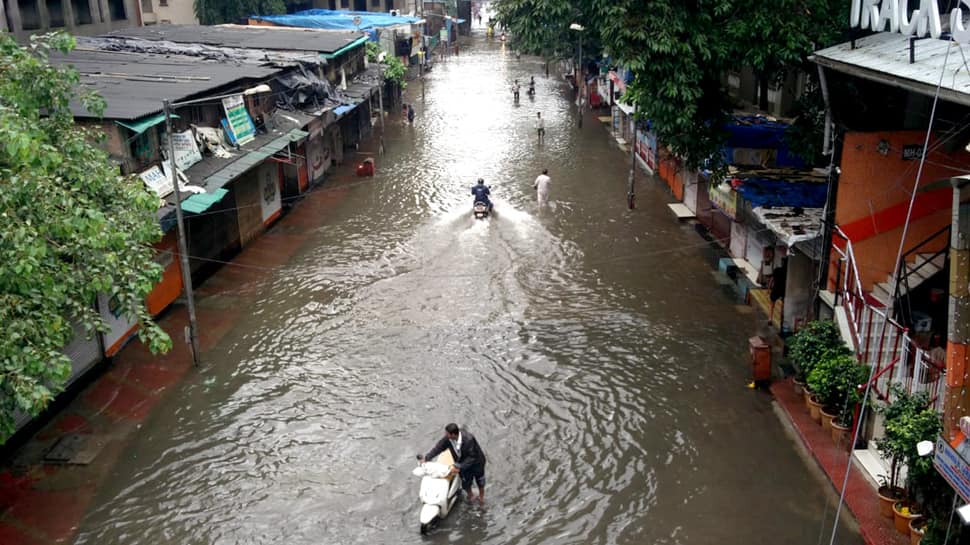 Mumbai: After two days of incessant rain which threw normal life out of gear, Mumbai is all set to receive another bout of heavy rainfall on Sunday.

The India Meteorological Department (IMD) has predicted heavy to very heavy rainfall in the city and suburbs, bringing no respite to the people.

The Disaster Cell of Brihanmumbai Municipal Corporation (BMC) has been put on alert as high tide is predicted at 9:03 am along the Mumbai coast on Sunday.

Waves as high as 3.60 metre could rise in the Arabian Sea. People have been requested not to venture along the coastline during the high tide. The BMC has issued an emergency helpline number 1916 for disaster response.

Fishermen have also been warned not to enter the sea due to the continuous downpour.
Due to the heavy rains, the admission process for medical and engineering colleges in the state has been postponed by two days.

Local train services on Western Railways are likely to remain unaffected and run smoothly on Sunday. However, the area surrounding Badlapur-Karjat-Kasara railway stations is still heavily waterlogged due to the torrential rain happening for the past 48 hours. Therefore, the area beyond Kalyan will be unserviceable on the Central line on Sunday.

Traffic congestion in various parts of the city is expected due to the rains. Goa-Mumbai highway which was shut on Saturday due to a landslide near Parshuram Ghat and overflowing of Jagbudi River in Ratnagiri district will remain closed on Sunday as well.

The Chhatrapati Shivaji International Airport in Mumbai have taken extensive precautionary measures to deal with incessant rains. All the drain blocks near the airport are being checked for leakages by the concerned authorities.

Ready to eat items, drinking water to be distributed among passengers, toiletries, dental kit, rainwear, gumboots, inflatable jackets have been stored. Standby duties for ground staff have been marked in the roster as monsoon contingency in case waterlogging is reported.

Fleeter buses have been made available to ferry passengers to the nearest stations while additional chairs have been arranged at check-in areas and meeters and greeters area. More manpower has been deployed in case any vehicle breaks down.

The airport authorities are working in coordination with the Central Industrial Security Force (CISF) for transferring the transiting passengers internally between different terminals.

The authorities have also been in touch with local administration and BEST bus service authority for arranging alternative transportation for passengers and staff.

Since Friday evening, Mumbai has been witnessing incessant showers as southwest monsoon hit the Maharashtra region after a brief break of one week.

The city struggled with severe traffic snarls and waterlogging, while the people scrambled to reach their homes. The local train services took a hit which were either delayed or cancelled. At least nine flights were diverted at Mumbai airport.

Over 115 people were stranded at Kamba petrol pump as several NDRF teams were deployed to rescue them safely.

Mahalaxmi Express, plying between Mumbai and Kolhapur, was held up between Badlapur and Wangani railway stations due to waterlogging on tracks. Over 900 people stranded on the train were rescued by central forces including NDRF, Army, Navy, Air Force, Railways and local administration.