We had earlier revealed the business and family links between the two families. Today we will show you where Murari Lal Jalan himself has given in writing that he has a connection with the family of the Gupta brothers.

New Delhi: Murari Lal Jalan, who is trying to purchase Jet Airways, is being backed by the infamous Gupta brothers (Ajay, Atul, Rajesh Gupta) of South Africa who are facing serious charges of corruption. For this reason, the Guptas had to flee from the country.

We had earlier revealed the business and family links between the two families. Today we will show you where Murari Lal Jalan himself has given in writing that he has a connection with the family of the Gupta brothers.

It has now come to light that Murari Lal Jalan has himself revealed the relationship between the two families.

Zee Media has a copy of the resolution plan given by Murari Lal Jalan in the Company Law Tribunal. In this document, Jalan has mentioned the name of Shashank Singhala, son of Atul Gupta, one of the Gupta brothers, in a column under the 'Connected Persons' category. 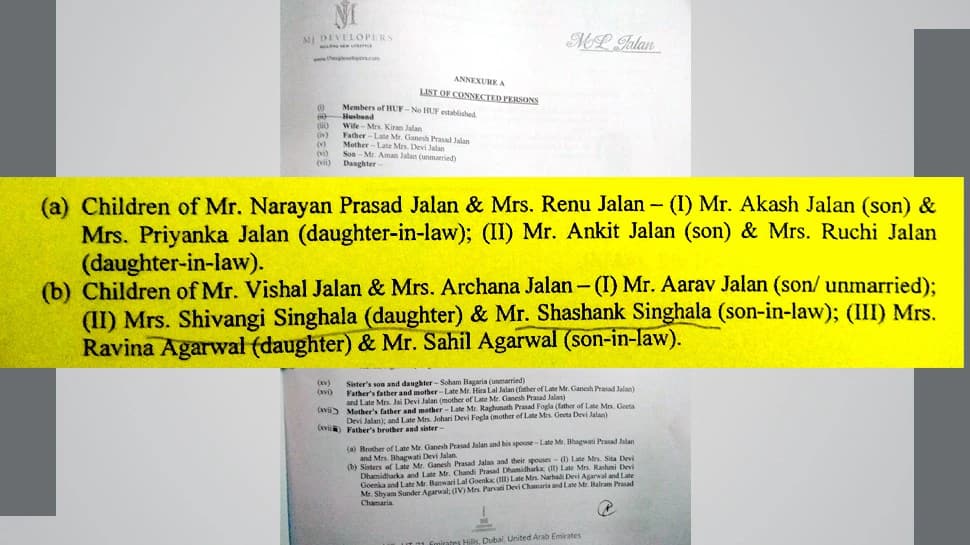 Now you need to understand what does the 'Connected Persons' written in this document mean. 'Connected Persons' means those people who are associated with the promoters of the company. In the Company Law Tribunal, Murari Lal Jalan has given the details of his brother Vishal Jalan and his family. He has named his niece Shivangi along with her husband Shashank Singhala. Jalan has also mentioned that Shashank Singhal is the son-in-law of his brother Vishal Jalan.

It is also important to understand why Murari Lal Jalan named the people of the Gupta family in the information related to 'Connected Persons'. According to the Insolvency Act, it is necessary to give details of all the members of the family of the bidder attempting to buy a company. It is also necessary to check the eligibility of the promoter who is filing the resolution plan.

Will Jalan be able to buy Jet Airways? Security clearance in doubt as DGCA steps in

Zee Media had earlier disclosed how the two families have business connections.

An agreement was done in July 2018, which was registered in Delhi. The two parties to this agreement were LCR Investments, a Gupta family company and the Bengal Orion Financial Hub Ltd of the Jalan family. According to this agreement, LCR Investments signed an agreement to sell a 68.50 per cent stake in its partner company, Heritage Aviation, to the Jalan family company Bengal Orion Financial Hub for 6 crore 85 lakh rupees.

Shantanu Awasthi is the director of LCR Investments. According to the documents filed in the Ministry of Company Affairs, Government of India, the agreement was signed in July after which the shares were transferred from LCR Investments to Bengal Orion Financial Hub on December 1, 2019. Murari Lal Jalan previously held about 78 per cent stake in the Bengal Orion Hub. Later this stake was transferred to his brother Vishal Jalan.

In response to Zee Media, Murari Lal Jalan denied that Gupta brothers had no hand in the Jet Airways bid. He also said that he has no business links with them. But the documents tell otherwise. The documents clearly establish the deep connections between the Gupta brothers and the Jalan family.