Hours after four JeM terrorists were killed in an encounter on the Jammu-Srinagar National Highway, Army Chief gave a strict warning to Pakistan. 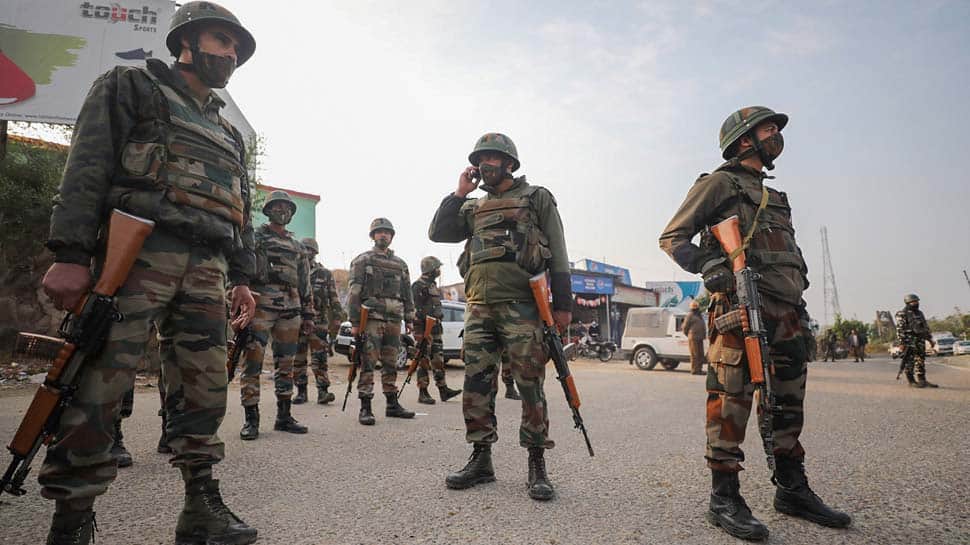 Indian Army Chief General Manoj Mukund Naravane on Thursday gave a strict warning to Pakistan that no intruder who crosses the Line of Control (LoC) to infiltrate into India will survive, hours after four Jaish-e-Mohammad (JeM) terrorists were killed in an encounter with security forces on the Jammu-Srinagar National Highway. The terrorists, who were hiding in a truck, were killed near the Ban toll plaza on the highway of the union territory in the early hours of Thursday.

The Army Chief said that the message was very clear for Pakistan and its terrorists that whosoever crosses the LoC to infiltrate into India would be dealt with in the same manner and would not be able to go back, as reported by news agency ANI. The Army Chief heaped praise for the troops who carried out the operation against terrorists hiding in a truck laden with apples. He said that there was a great deal of synergy between the Army, Jammu and Kashmir Police and paramilitary troops deployed there. 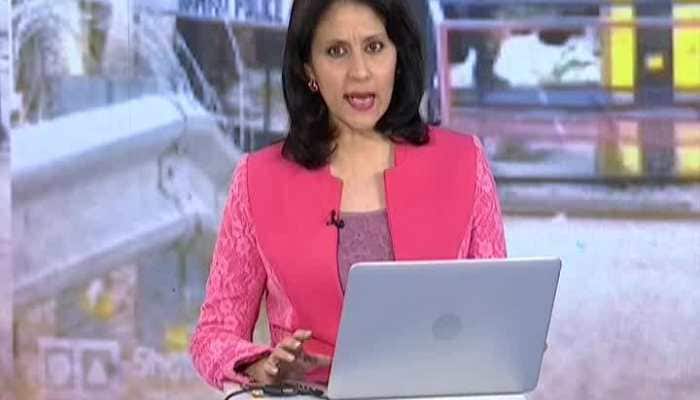 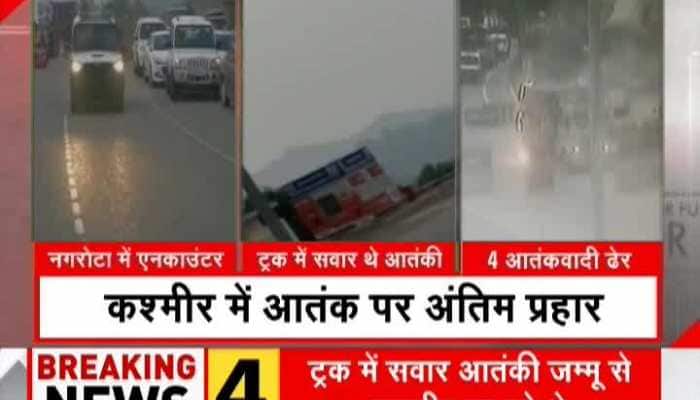 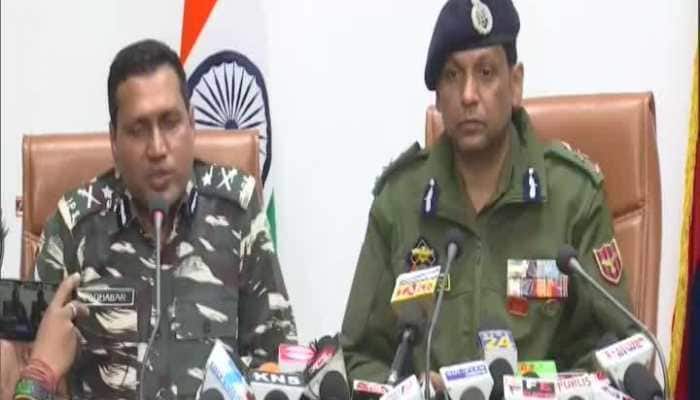 The encounter started after a truck carrying four terrorists from Jammu to Kashmir was intercepted by security forces personnel near the highway. The officials said that the gunbattle started near Nagrota toll plaza when some terrorists opened fire at police and paramilitary forces. The Army also joined the operation, they said.

4 terrorists killed in encounter at Nagrota in #Jammu pic.twitter.com/4OalbEqEoo

A few hours after the encounter, the National Investigation Agency (NIA) team visited the site. Security agencies will investigate the possible crossing routes of terrorists in Samba-Hiranagar sector. Earlier, DGP Jammu Kashmir Police Dilbagh Singh said, "Terrorists affiliated with JEM group have been killed at Ban toll plaza in Jammu -Kashmir Highway near Nagrota. They infiltrated from Samba Sector. The terrorists lobbed a grenade on security forces during checking." 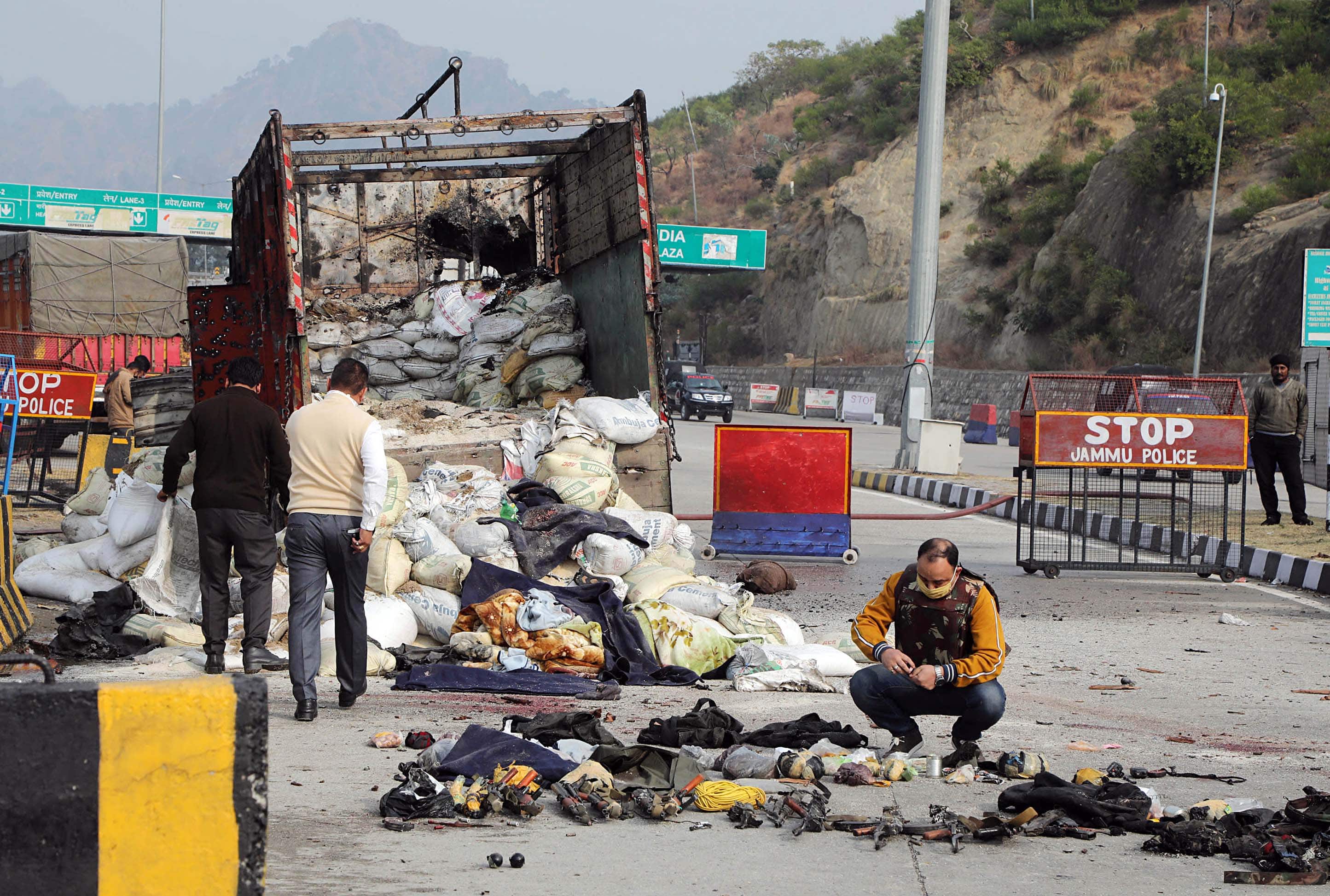 The security agencies will also investigate where the rice was loaded in the truck from and find out the owner of the vehicle using the number of the truck. The truck driver had escaped but the truck was going from Jammu to South Kashmir. 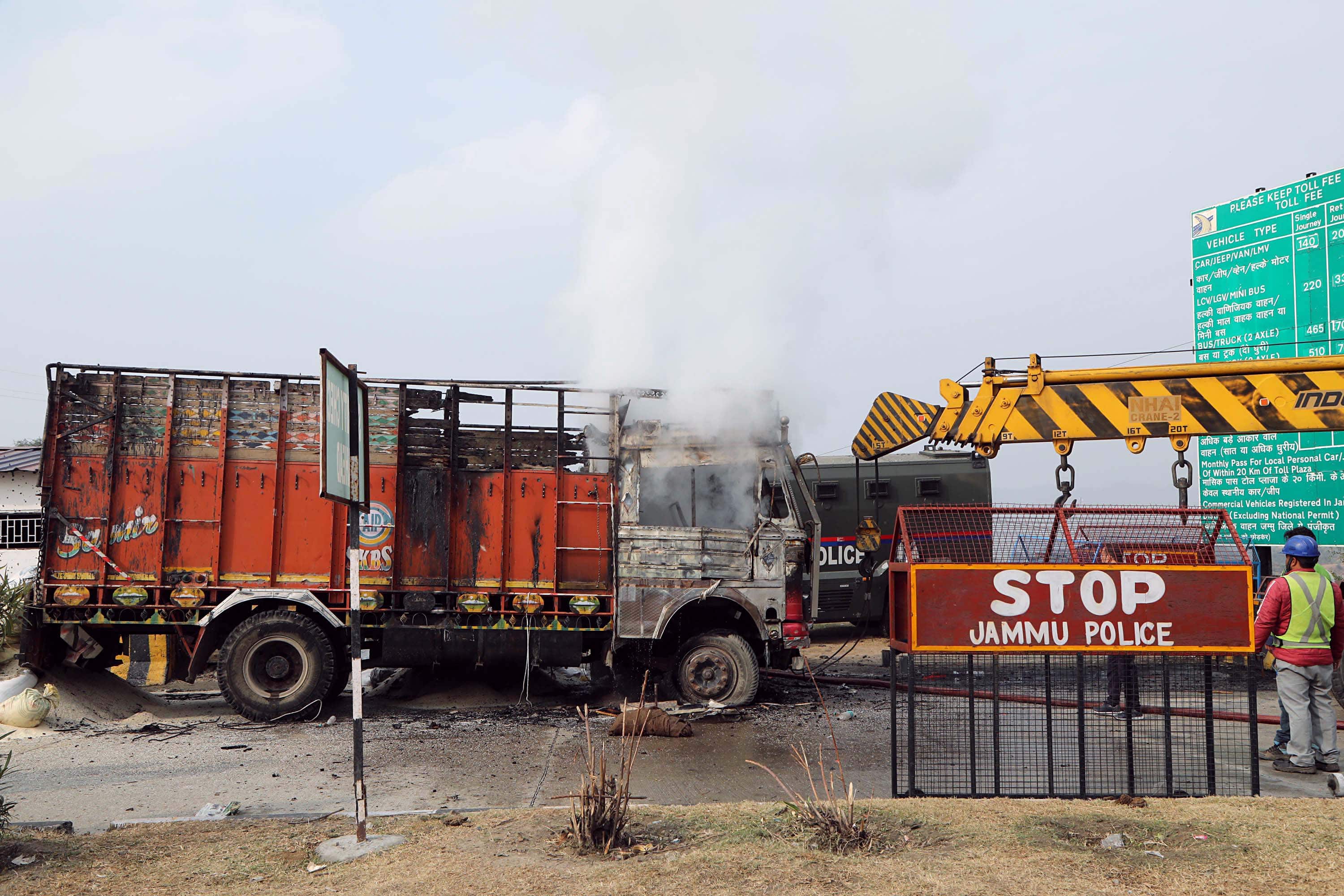 The terrorists infiltrated by passing through the International Boundary along Samba-Kathua district but an investigation is going on to find out from where they crossed. The truck took these people from Samba-Hiranagar sector (Samba-Kathua district border area). When they reached the Nagrota Toll Plaza, the police stopped them and questioned them. Amid the interrogation, the terrorists threw the grenade and started firing. 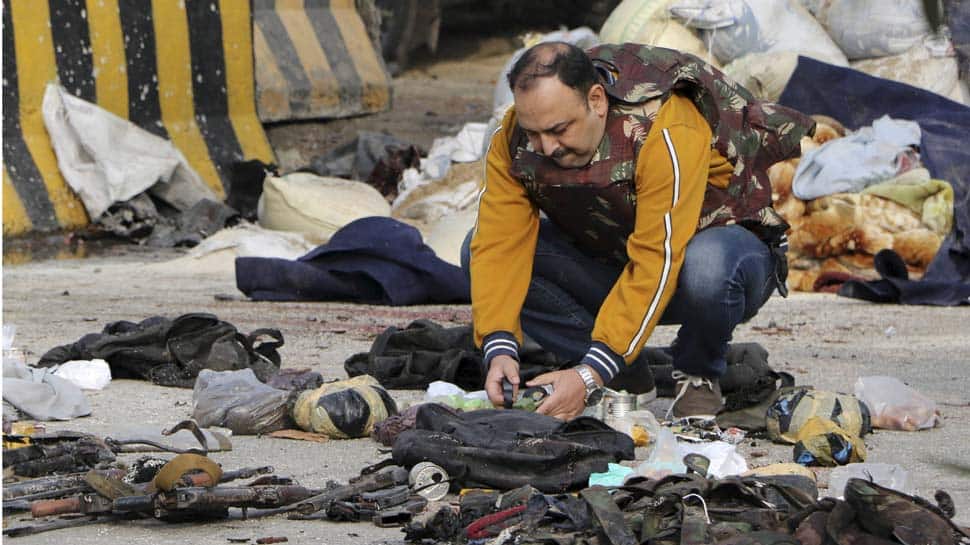 The operation was completed by the security forces within two hours but due to fire in the truck, there were explosions due to the ammunition. It was later extinguished by the fire brigade after which the bomb disposal squad came and they recovered the weapons. It includes--11 AK series rifle, 29-30 Chinese grenade, three pistols, two cutters, RDX of four-five kg. In addition, remote, mobile phone, dry fruit, Pakistan-made medicines were also recovered. 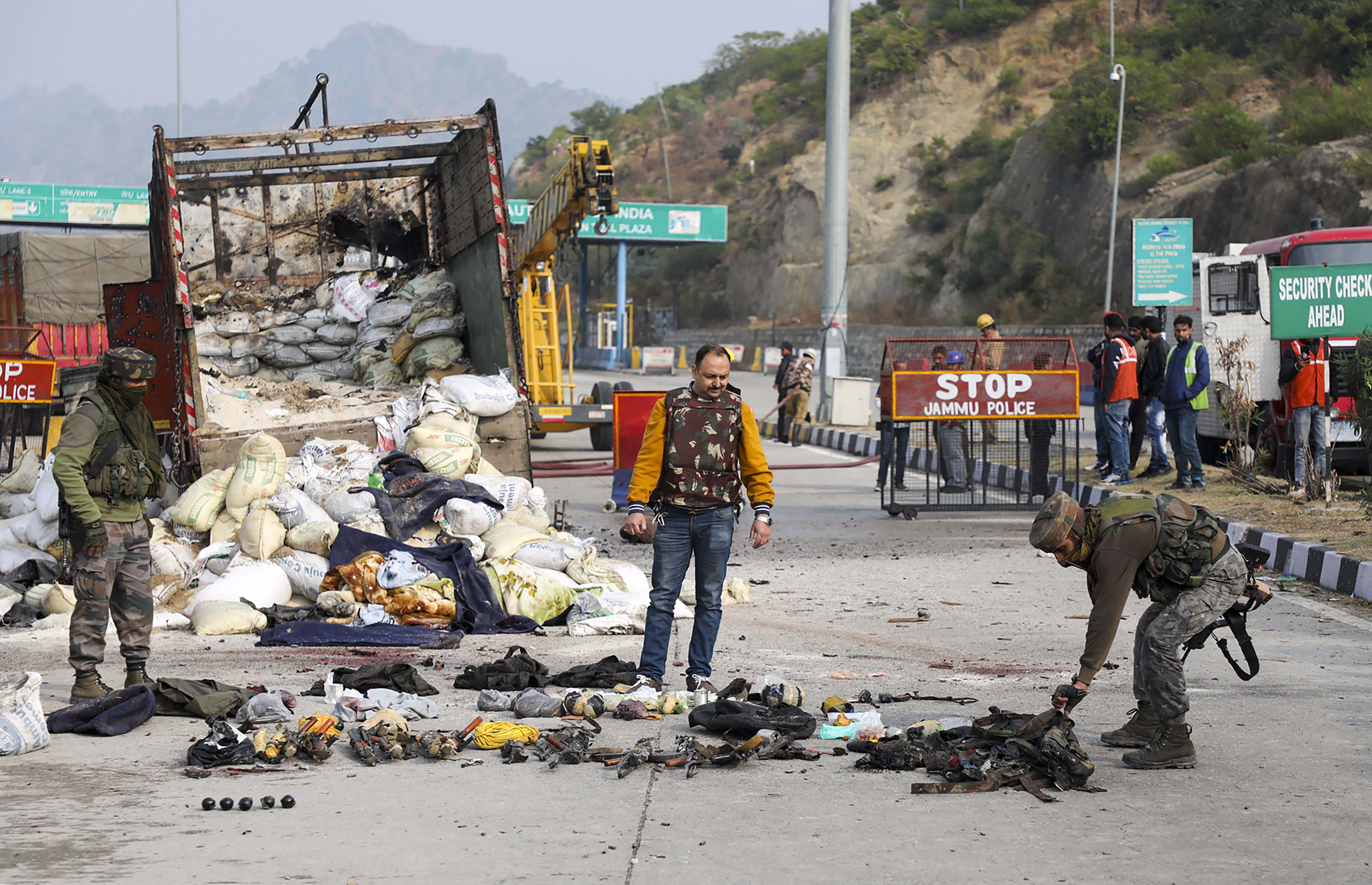 According to the police, the manner in which the weapons were found, it is clear that the terrorists were coming to execute a big attack. Two SOG men of the J&K police were injured in the gunfight, officials said. The gunfight according to the officials started around 5 AM.

The injured were identified as Kuldeep Raj (32) of Akhnoor and Mohammad Ishaq Malik (40) of Neel Qasim Banihal Ramban. Both have been admitted to GMC Jammu with injuries on the neck and their condition is said to be stable.

Is India carrying out pinpoint strikes on terror launchpads inside PoK? Here's the truth