Union Minister Giriraj Singh has attacked actors Naseeruddin Shah and Kamal Haasan and termed them as agents of 'ghazwa-e-hind’. 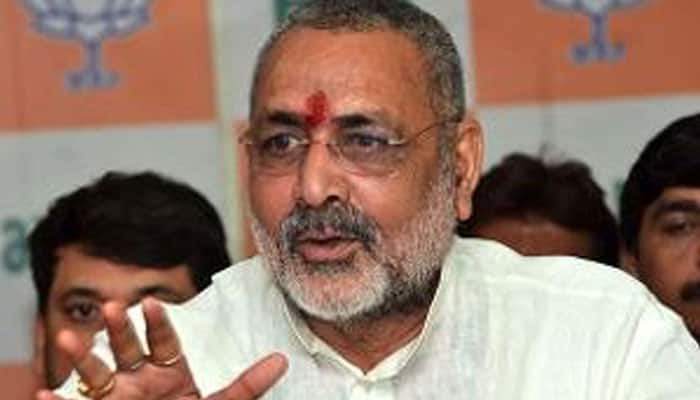 NEW DELHI: Union Minister and BJP leader Giriraj Singh on Tuesday labelled actors Naseeruddin Shah and Kamal Haasan as the agents of 'ghazwa-e-hind’ at a time when anti-Pakistan sentiments are on the rise after the deadly attack on a CRPF convoy in Jammu and Kashmir's Pulwama last week.

''In Pakistan, there are talks of ‘ghazwa-e-hind’, which means 'Islamikaran' of India (the spread of Islam) and the same have gained momentum after the Pulwama attack. It is unfortunate that in India, people like Naseeruddin Shah and Kamal Haasan have become agents of those who talk of ‘ghazwa-e-hind’,'' the Bihar BJP MP said.

Giriraj Singh: In Pakistan there are talks of ‘ghazwa-e-hind’, which means 'Islamikaran' of India(spread of Islam)& have gained momentum after Pulwama attack.Unfortunate that in India, ppl like Naseeruddin Shah & Kamal Haasan have become agent of those who talk of ‘ghazwa-e-hind’ pic.twitter.com/d7MbMrxOzO

Both Shah and Haasaan have in the recent past faced intense criticism for their comments on mob lynching and Hindu terrorism and have even issued clarifications over the same.

This is not the first time that Singh has made such critical remarks targeting celebrities and his political rivals for their soft posturing on issues like cross-border terrorism, Ram temple, Triple Talaq among others.

Giriraj Singh had earlier called the Islamic seminary Darul Uloom Deoband a 'temple of terrorism' and warned that no one in this world will be able to stop the construction of Ram temple in Ayodhya.

The Union Minister had earlier suggested that India needs a law to control population growth.

He said the population of Hindus in 54 districts of the country has fallen and said if population control measures are not put in place it would pose a threat to social harmony and impede progress.

Giriraj Singh made these controversial remarks in Uttar Pradesh's Amroha hours after he used population figures to tweet that India would face another partition in 2047 if population control in not put in place.