The INSV Tarini's six women crew members have sailed their way into record books after circumnavigated the globe in 254 days. 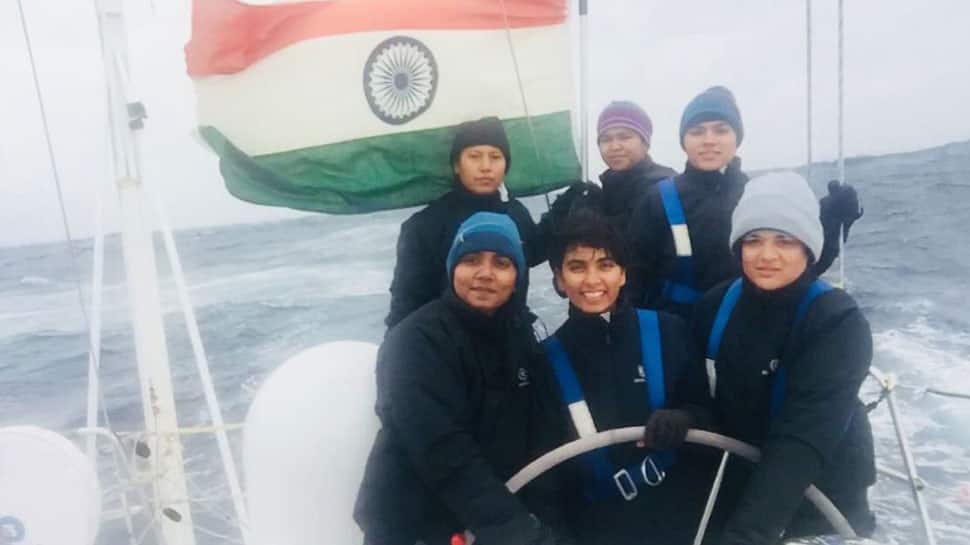 The Navy chief said that girls must pursue their dreams with vigour and they should hesitate in taking the extra step beyond their comfort zone in order to achieve their dreams.

Admiral Sunil Lanba made the remarks while addressing students and naval officers at an event held at the Lady Shri Ram College for Women in New Delhi ahead of the International Women's Day on March 8.

The INSV Tarini's six women crew members have sailed their way into record books after circumnavigated the globe in 254 days. Their journey was showcased in a documentary that premiered at the event, PTI reported. The film named 'Tarini' will air on the National Geographic channel on March 8.

Lieutenant Commander Vartika Joshi led the crew which had achieved the feat by braving treacherous seas in their 55-foot sailing vessel.

"The Navika Sagar Parikrama was envisaged with the philosophy of challenge and the spirit of adventure... They sailed for nearly 199 days out of the total of 254 days of the expedition, covering 22,000 nautical miles, and facing rough seas, scorching sun, biting cold and freezing winds with an unrelenting spirit," Lanba said.

The expedition was flagged off on September 10 in 2017 from the INS Mandovi boat pool in Goa and the team had returned to Goa last May. The other crew members were -- Lt Commanders Pratibha Jamwal and Swati P, and Lieutenants Aishwarya Boddapati, S Vijaya Devi and Payal Gupta.

The six women officers were trained by Captain Dilip Donde, the first Indian to circumnavigate the globe solo in 2009-2010.

The historic expedition comprised six legs, with stopovers at the Fremantle (Australia), Lyttleton (New Zealand), Port Stanley (Falkland Islands), Cape Town (South Africa) and Mauritius. During their record-breaking voyage, the women officers covered five countries and touched the equator twice. They passed through all longitudes and the three Great Capes -- Cape of Horn, Cape of Good Hope and Cape Leeuwin.

"The crew demonstrated unflinching resolve and solid fortitude facing challenges and tough conditions, and in doing so, joined an illustrious league of women whose accomplishments have contribute to the discourse of women empowerment in the country," the Navy chief said.

"These brave women officer are role models and they will serve as an inspiration to the youth of our nation and to young women. You frequently stumble on opportunities to do something outside the comfort zone. It is very easy to say no (to going out of the comfort zone). So, take courage to do things that make your hands sweat and your hearts race," he added.

Pakistan got worried after IAF air strike, tried to enter India but was chased back: Rajnath Singh