NEOWISE Comet: Here's how you can watch this once in 6,000-year celestial phenomena

Skygazers have a once in a lifetime opportunity to watch comet NEOWISE, also known as C/2020 F3, from the Earth for the next 20 days. 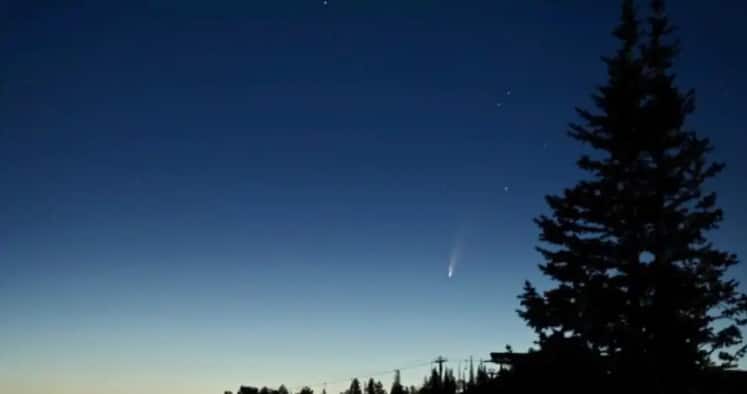 New Delhi: Skygazers have a once in a lifetime opportunity to watch comet NEOWISE, also known as C/2020 F3, from the Earth for the next 20 days. The comet will be visible to the naked eye each day for 20 minutes, according to reports.

The occasion is considered a lifetime experience for Skygazers as the comet comes back only once every 6,000 years, according to NASA report.

The NEOWISE comet will be the closest to Earth on July 22, and the distance at that point will be roughly 103 million kilometers from Earth.

Those who want to watch this celestial phenomenon should know that the comet will be visible an hour before dawn for the next few days. With the passage of this month, the comet will reportedly be visible in the evening before it fades in the next month.

In coming days, the comet will become increasingly visible shortly after sunset in the northwest sky. If you’re looking at the sky without the help of observation tools, Comet NEOWISE may look like a fuzzy star with a bit of a tail.

Earlier NASA said, "Right now, the comet is relatively easy to observe with binoculars or a small telescope, provided you have a clear view toward the horizon."

If you are also interested to catch a glimpse of Comet NEOWISE, here's what you need to do:

1. You need to first find a spot away from city lights with an unobstructed view of the sky

2. After sunset, try to look below the Big Dipper in the northwest sky

3. You should bring binoculars or a small telescope to get the best views of this celestial object

Odisha planetarium’s Deputy Director, Dr Subhendu Pattnaik told ANI, “From July 14, C/2020 F3, a comet discovered on March 27, will be clearly visible in the north-western sky. It will be visible after sunset for around 20 minutes for the next 20 days. People can observe it from naked eyes.”

“In the evenings to follow, the comet will rapidly climb higher in the sky and will be visible for a longer period,” Dr Pattnaik added.