Prime Minister Narendra Modi also talked to CM Sonwal on Sunday and assured all support to Assam in dealing with the flood havoc. 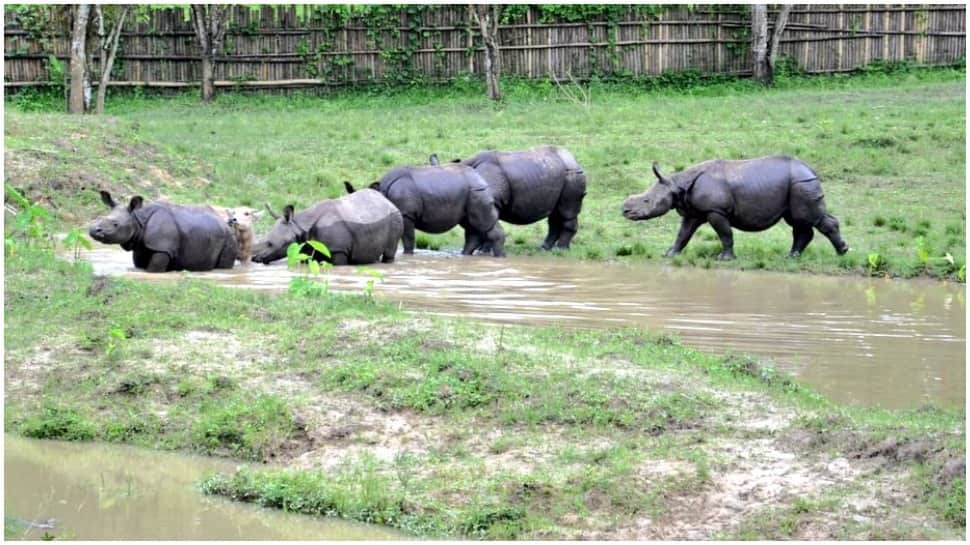 Kaziranga: The Assam floods that have affected around 26 districts across the state and have displaced more than 27.6 lakh people have also killed over 108 animals, including 9 rhinoceroses at the Kaziranga National Park.

"Around 80 per cent of the area is still under inundation. The rhinos that went out of the national park are back again. As regards mortality, 108 animals have died so far, including nine rhinos," Shiv Kumar, Director, Kaziranga National Park, was quoted by ANI news agency.

"The death toll may increase as water is receding and we are conducting a survey of all areas to find out mortality," Shiv said.

He added that they have also rescued 136 animals.

According to the park authorities, other than the nine rhinos, four wild buffaloes, seven wild boars, two swamp deer, and 82 hog deer have died due to floods.

Recently, Assam CM Sarbananda Sonowal had also visited the Centre for Wildlife Rehabilitation and Conservation at Kaziranga to take stock of the flood situation and conditions of animals in the park.

With Ministers Shri @ATULBORA2, Shri @keshab_mahanta & MP Shri @KamakhyaTasa, visited Centre for Wildlife Rehabilitation and Conservation (#CWRC) at Borjuri village near #KazirangaNationalPark and took stock of flood situation and conditions of animals in the park. pic.twitter.com/a4A3comxCt

The CM will assess on-ground flood situation and meet the affected people there. pic.twitter.com/PYPnoeHyQU

The CM also handed over ex-gratia amount of ₹ 4 lakh each to the next of kin of flood victims at Jhargaon in the Morigaon district.

Prime Minister Narendra Modi also talked to CM Sonwal on Sunday and assured all support to Assam in dealing with the flood havoc.

Discussing the flood situation with CM Sonowal over the phone, PM Modi also enquired about the COVID-19 scenario and the ongoing efforts to douse the raging blaze at Oil India's Baghjan gas well.

Expressing his concern & solidarity with the people, the PM assured all support to the state.

According to the Assam State Disaster Management Authority (ASDMA), there have been 79 flood-related casualties in the state, while as of July 18, a total of 1,16,404.01 hectare of crop area has been affected in Assam.

A flood report issued by the ASDMA stated that the river Brahmaputra was flowing above danger level in several places in the state.

The topography of Assam and meteorological factor (high rainfall) are the obvious reason behind Assam floods every year.

As per the Brahmaputra board’s latest annual report, the main reasons behind the instability of the river are high sedimentation and steep slopes.

Additionally, the entire area falls in an earthquake-prone zone and experiences high rainfall. The region is also extremely vulnerable to breaches of embankments.