The organisations have decided to observe Monday as a black day in Assam. 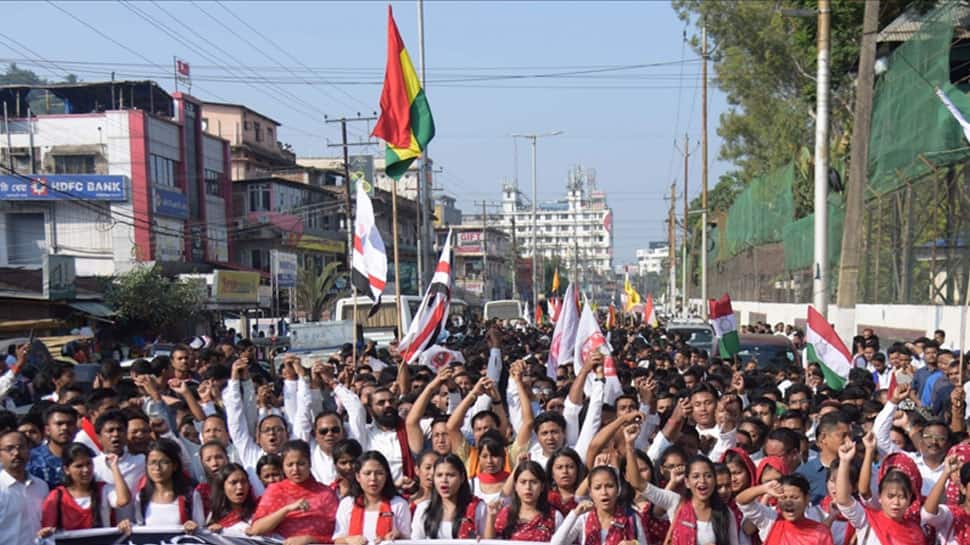 In the wake of Prime Minister Narendra Modi's announcement to pass the Citizenship Bill, the All Assam Students Union (AASU), the North East Students Organization (NESO) and 30 other groups have announced a series of protests in Assam on Monday and Tuesday.

PM Modi told an election rally near Silchar in Assam's Barak Valley on Friday that the Citizenship (Amendment) Bill, 2016, would be passed soon in the Parliament as a "penance against the injustice and many wrongs done in the past".

The organisations have decided to observe Monday as a black day in Assam. ASSU president Dipanka Nath said that on Monday, the day the JPC tables it report on the bill in Parliament, copies of the report will be burnt across the state

"Assam is ours and not a dustbin for Bangladeshis. The Central and Assam government have pushed us to the agitational path. The Modi government at the Centre by imposing the bill and the Sarbananda Sonowal government by not opposing ... Have inflicted mental torture on the indigenous people of Assam threatening their existence, identity, language, culture and heritage," he said.

Major students' bodies, social and other organisations have called a 'bandh' in the Northeast on January 8 against the bill which is expected to be discussed in Lok Sabha on Monday.

The NESO and the AASU have also called for a north-east and Assam bandh on January 8 to protest. Samujjal Kumar Bhattacharyya, the chief advisor of the North East Students Union (NESO) and All Assam Students Union (AASU) said the 11-hour bandh was called by the two organisations along with allied 30 ethnic organisations in Assam to oppose the bill and condemn the PM's statement.

"We have called for a bandh in the entire northeast on January 8 in protest against the BJP-led government`s move to pass the controversial Bill. Total dawn to dusk bandh will be observed in all the states," said Bhattacharyya.

Bhattacharyya said they decided to intensify their movement against "forceful imposition of the bill on the people of Assam and the North East region and to call the bandh was against our will. We are calling a bandh after 10-years". The bandh will be in force from 5 am to 4 pm, he said.

All scheduled examinations, All Bodo Students Union, Gorkha cultural meet, Kesab Mahanta National Theatre Festival and essential services were exempted from the purview of the bandh, he added.

On January 23, mass protest marches will be held in Assam followed by public meetings.

AASU General Secretary Lurin Jyoti Gogoi called Assam Chief Minister Sarbananda Sonowal a "puppet" and said the government in the state had failed to respect the sentiments of the people of Assam.

The Citizenship (Amendment) Bill, 2016, was introduced in the Lok Sabha to amend the Citizenship Act, 1955 to grant Indian citizenship to Hindus, Sikhs, Buddhists, Jains, Parsis and Christians, who fled religious persecution in Bangladesh, Pakistan and Afghanistan and entered India before December 31, 2014.

Another illegal mine mishap in Meghalaya, 2 killed in Mooknor