Pakistan captured some parts of Jammu and Kashmir illegally, this still stings us: PM Narendra Modi

PM Modi celebrated Diwali with soldiers near Line of Control (LoC), distributing sweets to the soldiers and also called them his family. The prime minister hailed the soldiers for maintaining a strict vigil on the borders even during festivals. 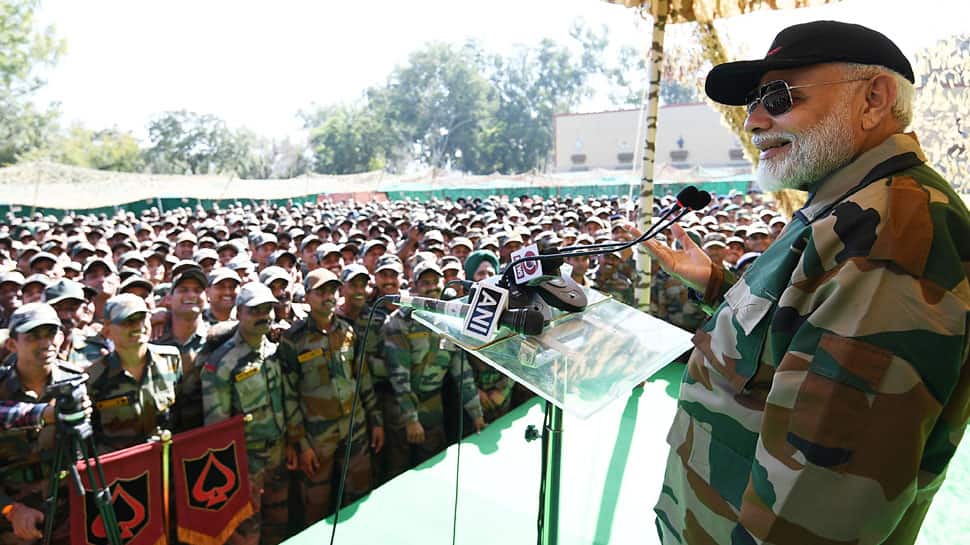 Prime Minister Narendra Modi has stressed that some parts of Jammu and Kashmir have been captured illegally by Pakistan, adding that this still stings India.

"Our country was partitioned... lakhs died and became refugees. But we (have) no ill-will against them (Pakistan). But they hatched a conspiracy to take over Jammu and Kashmir. Our brave soldiers foiled their plans and today we are proud to have it as part of India. They managed to capture some part of it, they have occupied it illegally - it still stings us," he said in Jammu and Kashmir's Rajouri district on Sunday.

PM Modi celebrated Diwali with soldiers near Line of Control (LoC), distributing sweets to the soldiers and also called them his family. The prime minister hailed the soldiers for maintaining a strict vigil on the borders even during festivals.

PM Modi said that while ordinary people think about their families first, soldiers always put mother India first and take care of the security of 130 crore Indians. "The country and your duty come first in your priority. All other things stand after that. But at the time of the festival, family members want you to celebrate Diwali with them but you keep guarding our borders," he said.

Talking about Rajouri district, the prime minister said that this region is unique and it has had to suffer all. "There are many border areas but this region where you are, is unique. Be it war, insurgency, infiltration - this has had to suffer all of it&it has come out of that every time. It's a region which has never seen defeat. It's not only victorious but also invincible," noted PM Modi.

In an indirect attack on Pakistan, PM Modi said that people across the border are trying to create disturbance in Kashmir but the Indian Army has demolished their conspiracies. He added that now Jammu and Kashmir is an integral part of India and some part of this region is currently under the control of Pakistan.

The prime minister arrived in Rajouri at around 12 pm on Sunday and this was his first visit to the Kashmir valley after the Centre decided to abrogate Article 370, which granted special status to the erstwhile state of Jammu and Kashmir, on August 5.

PM Modi's visit to the LoC coincided with Infantry Day celebrations, which is observed to mark the landing of first Indian troops in Jammu and Kashmir in 1947 to push back Pakistan-supported intruders.

This is for the sixth time that PM Modi has visited Jammu and Kashmir to celebrate Diwali with the troops in the border state since 2014. PM Modi had started the practice of interacting with troops serving in tough areas on Diwali soon after taking over as the prime minister in 2014 when he had spent his Diwali at Siachen in Ladakh region with the jawans, besides visiting the flood victims in Srinagar.

It may be recalled that in 2018, the prime minister had celebrated Diwali with ITBP personnel stationed on the India-China border. During his address in 2018, PM Modi had said, "His passion for doing duty on snowy mountains in far-flung areas makes the nation's strength stronger."