The PM said that Congress isn`t worried about its voter base (jan aadhar). “And still has sense of entitlement that it has ruled the country for 60 years and it is because of this that they haven`t been able to digest the fact that people have chosen us,” the PM said. 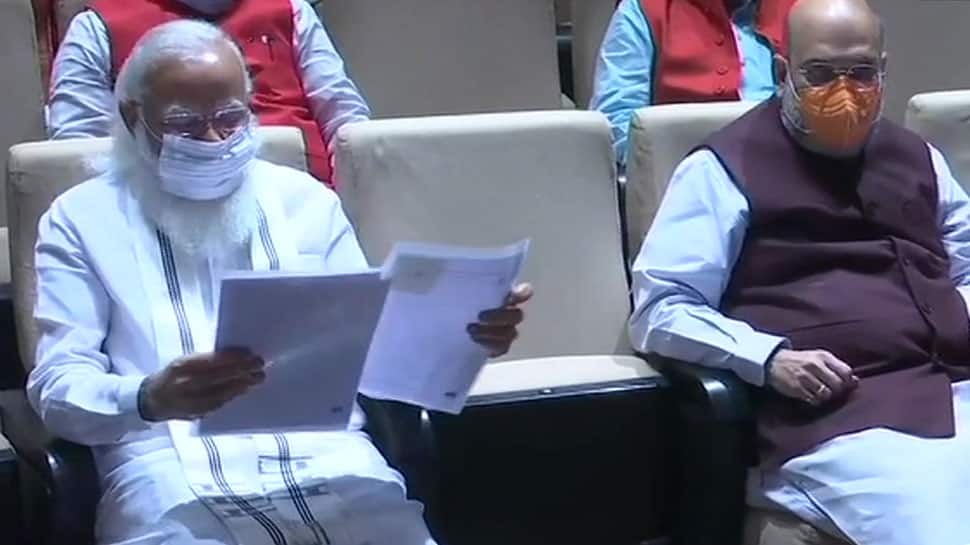 New Delhi: Amid a political storm over the Pegasus snooping row, Prime Minister Narendra Modi on Tuesday hit out at the Opposition parties for creating a ruckus over the issue and stalling proceedings inside the Parliament during the ongoing Monsoon Session.

The PM also reportedly directed the Bharatiya Janata Party Members of Parliament to defeat the lies propagated by Congress with truth and good work of the Modi government.

The PM asked them to take truth and facts about the government`s public welfare works before the people so that the opposition`s lies won`t fill the vacuum created by lack of communication or truth.

At the BJP`s parliamentary party meeting, PM Modi urged the MPs to keep telling people the truth to defeat lies propagated by the opposition, especially Congress.

Delhi: BJP all-MP meeting underway at Parliament, in the presence of PM Modi

Sources said that the Prime Minister expressed concern over the sense of entitlement of Congress which is preventing them to even fulfil their role as opposition.

He said that Congress isn`t worried about its voter base (jan aadhar). “And still has sense of entitlement that it has ruled the country for 60 years and it is because of this that they haven`t been able to digest the fact that people have chosen us,” the PM said.

He said despite their fate in elections of West Bengal, Assam they aren`t fulfiling their responsibility as opposition. PM Modi said as an opposition, they should take up issues of people`s welfare strongly which they aren`t doing," according to the source.

Reacting to the COVID-19 crisis, the Prime Minister said that it is not a political but a humanitarian issue and asserted that the government has ensured no one goes hungry during the pandemic.

Such a pandemic has been witnessed by the world after a very very long time, Parliamentary Affairs Minister Pralhad Joshi quoted the Prime Minister as telling MPs at the BJP's parliamentary party meeting.

Pralhad Joshi while briefing about today`s parliamentary party meet stated that the Prime Minister showed concern about the attitude of opposition.

"Especially Congress thinks power is their right and they work according to this mindset. PM wants discussions in Parliament to be fruitful, Congress is showing most irresponsible behaviour by disrupting the Houses. Be it vaccines or poor welfare schemes, MPs have been asked to ensure this. 41 crores have been vaccinated. PM Modi has also expressed concern that even in Delhi frontline warriors haven`t been vaccinated," Joshi added.

No iota of link between Govt and Pegasus issue. Still, if they (Opposition) want to raise the issue through proper procedure, let them raise it. IT Minister has already issued a statement on the issue: Parliamentary Affairs Minister Prahlad Joshi pic.twitter.com/gtYnivdFTv

The Speakers adjourned the proceedings of both the houses as the Opposition continued the uproar over various issues. The Monsoon Session began on a stormy note on Monday amidst uproar from Opposition parties who did not allow PM Narendra Modi to introduce newly-inducted Union ministers to the Parliament.

Later on the first day of the Monsoon Session, the proceeding of the house commenced at 3.30 PM after witnessing two adjournments at 2 pm and 3 PM.