DNA Exclusive: Exposing the foreign conspiracy behind the Pegasus Project

Zee News Editor-in-Chief Sudhir Chaudhary on Monday (July 19) explained the truth behind the Pegasus Project and exposed the foreign conspiracy involved in it. 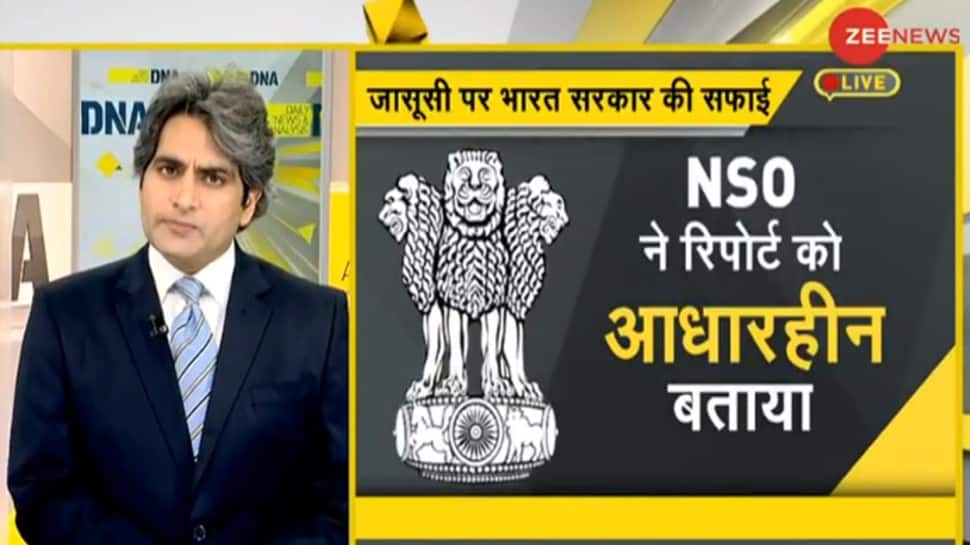 New Delhi: A new report has emerged which has left certain people worried as they allege that their right to privacy has been violated. They have claimed that Israel’s Pegasus spyware was used to spy on about 40 people including journalists, politicians, activists and others. Named “Pegasus Project”, the report has made astonishing allegations against the government of India.

Zee News Editor-in-Chief Sudhir Chaudhary on Monday (July 19) explained the truth behind the Pegasus Project and exposed the foreign conspiracy involved in it.

Some of the people who were allegedly spied on include Rahul Gandhi, Information and Broadcasting Minister Ashwini Vaishnav, Minister of State Prahlad Singh Patel, Union Minister Smriti Irani's Officer on Special Duty Sanjay Kachru and election strategist Prashant Kishor. Apart from this, the name of the personal secretary of former Rajasthan Chief Minister Vasundhara Raje is also on this list.

Forbidden Stories is a charitable organization that claims to provide a platform to such independent journalists whose lives are in danger from the government or enemies. It has been found to be associating with various other organizations that run propaganda against the Indian government, including Mediapart which is running a campaign against alleged corruption in the Rafale deal.

The use of Pegasus costs Rs 9 crore for snooping on ten people. If the espionage of 40 journalists of India is true, then Rs 36 crore would have been spent on them. All these journalists are either unemployed and inactive today or their influence is negligible. The question is that why anyone would spend Rs 40-50 crore to spy on them.

The kind of journalism done in the Pegasus Project uses information already available on the Internet and presents it in a sensational way. Some media organizations use it as a toolkit and an attempt is made to defame the country.

The maker of Pegasus, NSO Group, has denied the report. It said that the list in it is fake and has been there on the Internet for a long time. The organization also said that it is considering filing a defamation suit against organizations such as Amnesty International and Forbidden Stories.

The government of India has also refuted the allegations made in the media reports. The Centre said that the claims were baseless and malicious. The government also questioned the timing of the report which was published a day before the start of parliament’s monsoon session.

There are five key points to understand about the Pegasus row. They are:

1. The report contains a list of 50 thousand phone numbers. Investigating organizations identified 1500 of these and forensic investigation of 67 was done. Of the numbers identified, 300 are registered in India. Evidence of tampering through Pegasus was found in 37 of these mobile phones. That is, out of 50 thousand phone numbers, only 37 Indian mobile numbers were found to have been spied on. Thus, an investigation backed by just 0.04 per cent of the total phone numbers was made the basis of such a big disclosure.

2. The media organizations that are involved in this have themselves said that the presence of the phone numbers in the list does not prove that all the numbers have been spied on.

3. Many media organizations used headlines such as - How phones of journalists, ministers, activists ‘may’ have been used to spy on them. That is, those who published the story are themselves unsure of the snooping charges.

4. Pegasus is reportedly also used by countries like the US, UK and Pakistan. But this report does not mention these countries, while India has been placed in the list of countries where there is either no democracy or where the roots of democracy are very weak. This points to a well-planned conspiracy.