The first summit took place in Wuhan, China and focus in this year's summit will be too keep the momentum generated from the last year's summit. 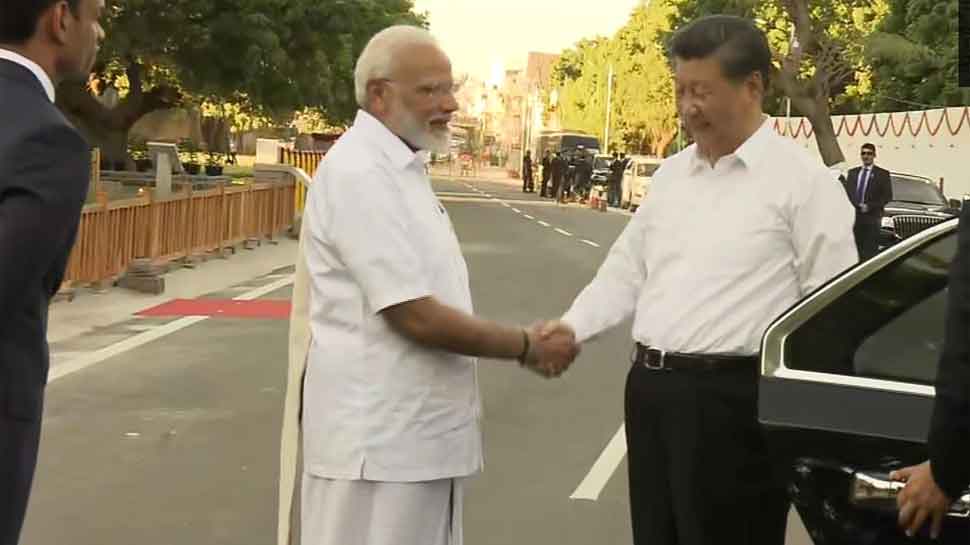 Mahabalipuram: Chinese President Xi Jinping arrived in India on Friday for the second India-China informal summit. PM Modi tweeted in Chinese, Tamil and English welcoming President Xi to India.  This is the third visit of the Chinese president to India since 2014. In 2014 he visited Ahmedabad and in 2016 he visited Goa for the BRICS summit.  Both the leaders will be spending three hours together on Friday and overall six hours in the 24-hour visit of the Chinese President.

He is accompanied by 90 officials including top Chinese leadership which include Ding Xuexiang who an important aide of President and current director of the General Office of the Communist Party of China, Yang Jiechi Director of the Central Foreign Affairs Commission Office, Foreign Minister Wang Yi and He Lifeng, minister in charge of the National Development and Reform Commission.

Around 5 pm, PM Modi will show the President of China three important UNESCO world heritage sites, Arjuna’s Penance, Panch Rathas and Shore Temple in Mamallapuram. The town has a rich history and during the Pallava empire, it is believed to have been an important trading-post connected with China.

In the evening after the cultural performances , PM Modi will host a dinner for the visiting leader in the backdrop of historic Shore temple at the Mahabalipuram beach. Tamil delicacies, both non-vegetarian and vegetarian will be on the menu during the dinner which will have 16 top officials from both sides, eight from Indian and eight from the Chinese side, excluding the top leadership.

On Friday morning, they will again spend time together and around 11 am before the delegation-level talks take place, they will be making opening remarks open to media. The first summit took place in Wuhan, China and focus in this year's summit will be too keep the momentum generated from the last year's summit.

Mahabalipuram, or Mamallapuram, was chosen as the spot for the crucial meet by PM Modi himself and the process to hold arrangements for the informal summit started in June 2019. India sent its first recce team in June to the town. While history played an important role, the fact that PM Modi is keen to have big summits outside national capital also played the clincher. PM Modi will also be gifting the Chinese President, though it has not been disclosed what will be given by the Indian side.

Since it is an informal summit, no joint statement is expected but both sides will issue separate statements in a coordinated manner. The trade deficit stands at 57.86 billion dollars and while greater market access has been given to Indian agriculture products like rapeseed, fishmeal, tobacco leaves, chilli meal, India is hoping it is translated into volumes.

On border dispute, both sides are expected to start work on new confidence-building measures that could be announced later this year. One of the key outcomes of the Wuhan informal summit that happened in the backdrop of 2017 Doklam crisis, was strategic guidance being given by both leaders to there armies to resolve any issue at the Line of Actual Control or LAC in a sensible manner.