The Seoul Peace Prize was awarded Modi in recognition of his dedication to international cooperation, global growth and human development. 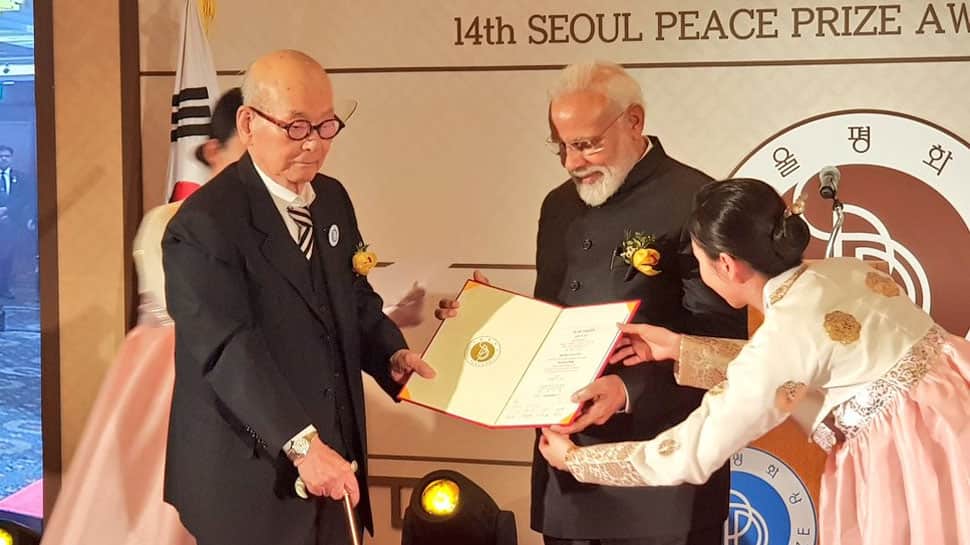 SEOUL, SOUTH KOREA: Prime Minister Narendra Modi received the Seoul Peace Prize in South Korea on Friday. Accepting it, he dedicated the award to the nation.

"I believe that this award belongs not to me personally, but to the people of India. The success that India has achieved in the last 5 years is due to aspirations, inspiration and efforts of the people of India. On their behalf, I accept the Award and express my gratitude," said the Prime Minister in his acceptance speech.

The $200,000 award money will be utilised for the Namami Gange Programme, a national conservation project to cleanse River Ganga, he added.

The Seoul Peace Prize was awarded Modi in recognition of his dedication to international cooperation, global growth and human development.

"I am honoured that this award is being conferred on me in the year that we celebrate the 150th Birth Anniversary of Mahatma Gandhi," said the PM.

Time has come for world to unite in fight against terrorism: PM Narendra Modi in South Korea

Award dedicated to people of India.

The PM recalled how a few weeks before the Seoul Olympics, deadly terror outfit Al-Qaeda was formed. "Today, radicalization and terrorism have become globalized and are the biggest threats to global peace and security," he said.

"Like Korea, India has also suffered the pain of division and cross-border strife. Our endeavour towards peaceful development has only too often been derailed by cross-border terrorism," he told the international audience.

"The time has come for all right-thinking nations to join hands to completely eradicate terrorist networks. Only by doing so, Can we replace hate with harmony; Destruction with development and Transform the landscape of violence and vendetta into a postcard for peace," he added

Highlighting India’s growth story, the Prime Minister said it's an "increasingly interconnected world. Our growth and prosperity will inevitably contribute to global growth and development."

"The Seoul Peace Prize was established to commemorate the success of the 24th Summer Olympics held in Seoul in 1988. The games ended on Mahatma Gandhi’s birthday. The games showcased the best of Korean culture, warmth of Korean hospitality & success of the Korean economy," said the 68-year-old Prime Minister.

In his parting shot, the Prime Minister quoted a portion of the 1988 Olympics Theme Song, "because it perfectly captures the hopeful spirit for a better tomorrow for all of us."

"Hand in hand, we stand

All across the land,

We can make this world,

A better place in which to live"

2019 general elections could be world's most expensive: US expert