This will be PM Modi's first overseas visit after re-election. 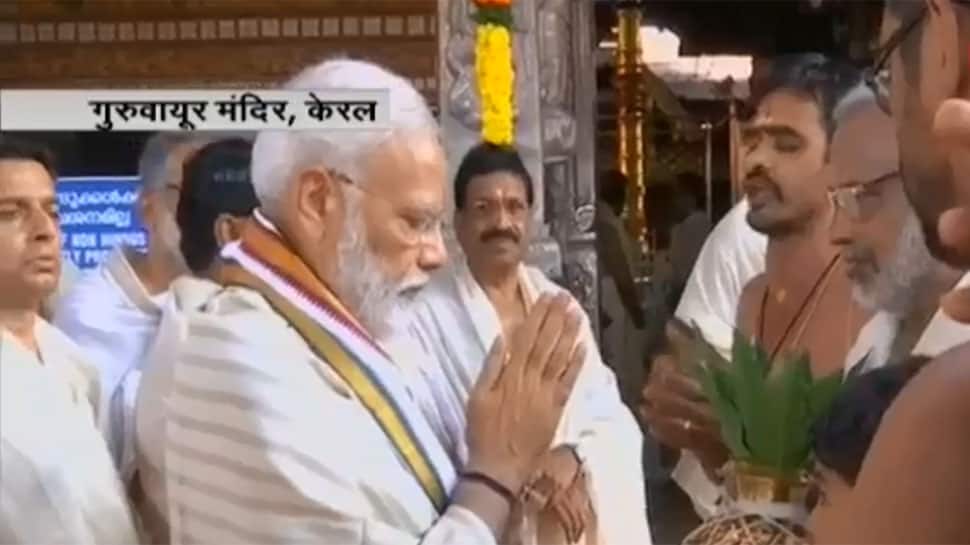 Thrissur: Prime Minister Narendra Modi offered prayers at Guruvayur Sri Krishna Temple in Kerala's Thrissur district on Saturday. He will later head off to the Maldives and Sri Lanka, his first foreign visit after being voted back to power for a second term as the Prime Minister.

PM Modi arrived in Kochi in the intervening night of Friday and Saturday, where he was received by Union Minister V Muraleedharan and Governor of Kerala Justice P. Sathasivam.

Welcome to the PM @narendramodi ji to the land of Sri Krishna. #KeralaWelcomesModi pic.twitter.com/WYpumCJzLy

After an hour-long 'darshan' at the temple, the Prime Minister will address a meeting of BJP workers for the first time in Kerala around 11:30 am.

Public meet at Guruvayoor Sree Krishna HS Ground at 10:00 am.

The Prime Minister's public address 'Abhinandan Sabha' is being organised by BJP members at the school grounds of the Sri Krishna High School.

Later, the PM will head off for a state visit in the Maldives and Sri Lanka.

In a statement, the PM said, “I am visiting the Republic of Maldives and the Democratic Socialist Republic of Sri Lanka on 08-09 June 2019 at the invitation of President Ibrahim Mohamed Solih and President Maithripala Sirisena, respectively. This will be my first overseas visit after my re-election.”

Maldives president Ibrahim Mohamed Solih has visited India in December last year while PM attended his swearing-in in November 2018. “My visit to the Maldives is reflective of the importance we both attach to our relationship as maritime neighbours and long-standing friends. We regard the Maldives as a valued partner with whom we share deep bonds of history and culture. Our bilateral relations with the Maldives have been greatly strengthened in the recent past. I am confident that my visit will further deepen our multifaceted partnership,” said the PM.

The PM will arrive in Maldivian capital Male at 3 pm and be accorded a ceremonial welcome at the Republic Square. He will then meet President Solih and hold delegation-level talks. This will be followed by a meeting with Maldivian Vice President Faisal Naseem and Speaker of Majlis Mohamed Nasheed. At 6:45 pm, the PM will deliver an address at a banquet hosted by President Solih.

The Prime Minister is also visiting Sri Lanka to express solidarity with the neighbour nation in the wake of the deadly Easter terrorist attacks on April 21, 2019.

“India stands with Sri Lanka in the fight against terrorism. Our bilateral relations with Sri Lanka have gained considerable momentum in the last few years. I had the pleasure of meeting President Sirisena during his recent visit to India to attend the swearing-in ceremony of the new government. I look forward to meeting the Sri Lankan leadership during my visit,” said the PM.

“I am confident that my visit to the Maldives and Sri Lanka will further strengthen our close and cordial ties with our maritime neighbours, in line with our ‘Neighbourhood-First Policy’ and the vision of Security and Growth for All in the Region,” he added.