Indian envoy to UN TS Tirumurti said, "Prime Minister of India present in-person, representing the largest democracy, in my opinion, that is the big message and this a very clear message of India's support to the United Nations, and to the multilateralism". 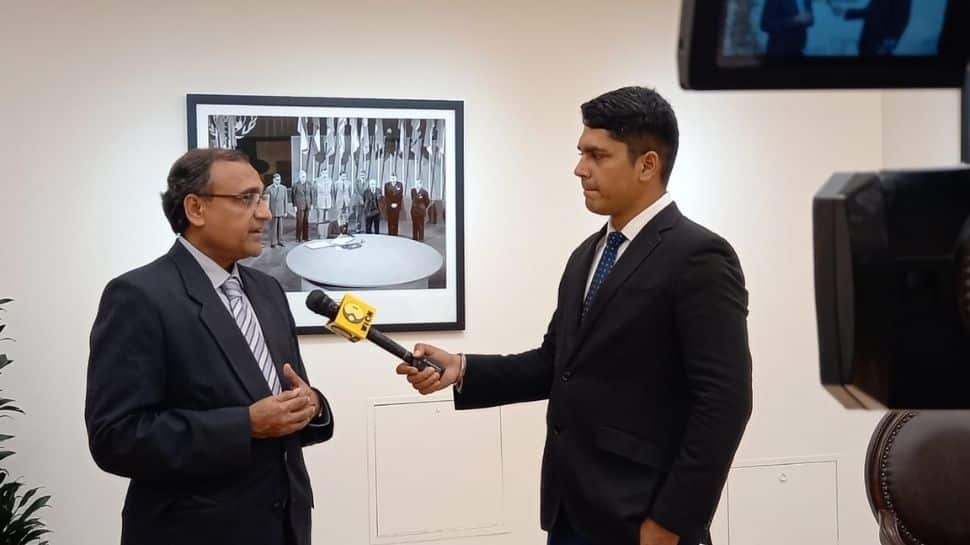 New York: Indian envoy to UN, TS Tirumurti said that Prime Minister Narendra Modi’s in-person address at the United Nations General Assembly (UNGA) was a message in itself, even as leaders of 70 countries addressed the body virtually.

Speaking to WION diplomatic correspondent Sidhant Sibal in New York, Envoy Tirumurti said, "Prime Minister of India present in-person representing the largest democracy, in my opinion, that is the big message and this a very clear message of India's support to the United Nations, and to the multilateralism".

PM Modi on Saturday (September 25) addressed the body for the fourth time since 2014. During his address, he talked about COVID-19 crisis, climate change, terrorism and Afghanistan. The address, in many senses, was the grand finale of PM's 3-day US visit which saw him going to Washington for the Quad meet and bilateral with US President Joe Biden.

Asked about Sneha Dubey, the Indian diplomat who responded to Pakistani Prime Minister Imran Khan's rants on India at the general assembly, the envoy said, "We have tradition, asking young officers to give a right of reply..." and "our way of telling them, you go ahead, and perform--and you should be noticed”.

WION: What was the big message from PM's UNGA address, his 4th address from the green podium since 2014?

TS Tirumurti: You know the big message was the presence of the Prime Minister, in the UNGA, in New York. At a time when they are adopting hybrid format and more than 70 world leaders are coming through the video to have the Prime Minister of India present in person representing the largest democracy, in my opinion, that is the big message and this a very clear message of India's support to the United Nations, and to the multilateralism. Apart from this, he has said several important messages, big messages in his own speech, and you have heard his speech. I would like to mention few highlights. One thing he was talking about, representing the mother of democracy and also from his own personal experience he has talked about how democracy can deliver and it has delivered. That is an important message. He talked about his vision for governance, which is to leave no one behind. He was also been emphasizing that India that represents one-sixth of humanity and India's developmental journey in many ways will be the development journey for the rest of the world. That is an important message he conveyed, that if India grows, then the world grows and when India reforms, the world transforms. I think that is a very powerful message, he has also talked about--India being there for the global good. Both as a provider and as a contributor for the global good--in this context he also mentioned about the fact that India will be resuming vaccine supplies to the rest of the world and this is something that has been welcomed very widely. Even some of the leaders mention it in some of their statements. They thanked India for standing by them with the vaccine contribution and there are also several other things he underlined, first is, the transforming role of technology, particularly citizen-friendly technology and also the fact he underlined-- technology with democratic values. That is something very important for us to keep in mind. The diversification, the resilience of the supply chain, is one very important aspect and the production centers as well.

When it comes to climate action, he underlined the ambitious action we are undertaking--you know very well that India is probably the only country in G20 which is on course to reach the Paris target. In this context, he referred to renewable energy contribution and also green hydrogen, just launched. He underlined our continued commitment to combat climate change. On the question of maritime security, he talked about oceans and the need to protect the resources of the ocean. I think why it is important, we have just had on August 9, during our presidency of the security council, an event on maritime security. It was a high-level event, in which PM himself was present. We had a presidential statement issued, which was probably the first presidential statement issued on the holistic concept of maritime security, so in many ways, it was extremely significant and therefore he underlined, that it is an important concept and needs to be taken forward.

He was very clear about and cautioned against regressive thinking and extremism. He was very categorical about--- terrorism and it should not become a political tool in the hands of people, because it will come to bite them and that is a very important thing he underlined. Terrorism has been a very important aspect which we have consistently underlined both in security council and outside. India took an active part in the global counter-terrorism strategy and it was adopted two months ago, and many of the concerns we have and many of the vision which we had on combatting terrorism, was reflected in the document.

On Afghanistan, he has, mentioned his views in SCO and here again he underlined the fact that the soil of Afghanistan should not be used by terrorists. He called for the protection of rights of women children and minorities. He talked about effectiveness and reliability of the UN, and in this context, he called for reforms-- the UNSC reforms is something which is not going anywhere in the last 15 years, and last year as well PM mentioned this, and this year again he underlined again, that we are committed to it and it is necessary and the will to make that happen. So, I think these are some of the important and find resonance in the UN context and in the context of Covid and so many other things like climate change etc. This is the big message.

WION: About the UNSC reforms, way forward, the challenges you see?

TS Tirumurti: The security council is an extremely important organ of the United Nations but unfortunately it is frozen in time. Over the last 75 years, there has been no change. The world has changed, but the security council hasn't. Therefore, it has not been representative of the changes taking place. When you are not representative of the changes, you become less credible. That is the real problem of the security council, it is becoming less and less credible to address world problems, therefore countries like India and many others have been calling for the reforms of the security council for last 15 years. We have a process called the intergovernmental negotiating process (IGN) and in the IGN we have been discussing this but it has gone nowhere. Obviously, the naysayers have had their say in this. And we are very determined that the chorus which is really growing for security council reform which we saw this time as well. And a great deal of determination that this IGN process should be focused on, and it should lead to text-based negotiation and we are hoping that in 75th session we will get enough steam to make sure we give a direction to this reform and we take it forward. That is the type of determination which many of us have and we hope to have others converted to our cause.

WION: India's role in the peacekeeping, if you can give details?

TS Tirumurti: India has played a huge role in peacekeeping. As you know we are the largest contributor. We have contributed 250,000 troops in peacekeeping. We have been pioneers in many ways. The first women peacekeeping contingent was from India and our women peacekeepers went to Liberia at that time. Also, we have had 174 martyrs, so we have played a huge role, we have given our blood for peacekeeping and that is why we felt that during our presidency, we should have, a high-level event which was chaired by external affairs minister himself in person. It was an extremely important event, and after more than 40 years, India for the first time tabled a resolution in the security council and it was against fighting impunity against the peacekeepers. It was extremely important because the crime is only increasing against the peacekeepers. That was passed unanimously in the security council. We have put in money on ‘UNITE Aware’ technology platform. This is our way of telling the member states that India will walk the talk on peacekeeping. We have responded to secretary general's call, we have donated 200,000 vaccines for all peacekeepers around the world, which was very widely welcomed. We upgraded two hospitals, one in Juba in south Sudan and another one in Goma in DRC Congo. We have also felt that we should do more in the context of peacekeeping, the high-level event which happened under the presidency of India happened on technology and peacekeeping. Because now technology has exponentially increased. Because in some ways, the peacekeepers are far less equipped technologically and people are coming to harm them. It was very well received, there was a presidential statement issued. We will continue during our UNSC tenure but even outside. We call the resolution as protecting the protectors. We want to make sure that those protect civilians, the peacekeepers, we give them enough to protect themselves.

WION: You chose a young diplomat, Sneha Dubey, who replied to Pakistani PM Imran Khan at the General Assembly. It is in continuation of the tradition--Eenam Gambhir, Vidisha Maitra.

TS Tirumurti: We have tradition, asking young officers to give a right of reply, or exercising a right of reply and this is partly because we would like these young officers to go on to the big stage and deliver a powerful message and gain confidence. This is our way of telling them, you go ahead, and perform-- and you should be noticed. It is important that they gain confidence from this as young diplomats. That is really why we encourage them to do that. But at the same time, it also has another message. Especially when leaders, misuse multilateral platform, they talk a very false and very abusive narrative against India, then having a young diplomat going and calling them out is also in my opinion a very symbolic message to send, this is how we look at it.