BJP leaders had claimed that more than 20,000 people are likely to be present outside the Palam airport to welcome PM Modi. 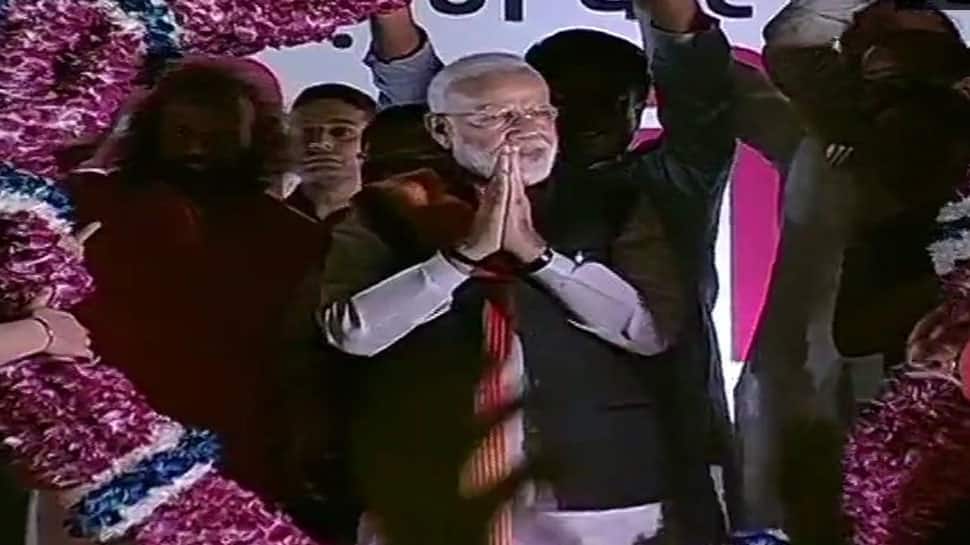 NEW DELHI: Prime Minister Narendra Modi, who arrived home on Saturday after concluding an 'extremely productive' week-long US visit, was given a rousing welcome upon his arrival at the Palam airport. The PM was felicitated at an event outside Palam Technical Airport shortly after his arrival in Delhi after concluding his visit to the United States of America.

On his turn, the PM thanked his party workers for giving a rousing welcome to him and the countrymen for their faith in his leadership and their unflinching support to him.

''The programme in Houston, 'Howdy, Modi' was grand. The coming of POTUS  was special. There were Republicans and Democrats. In addition to all this, what stands out is the manner in which the Indian community in USA, in Texas and in Houston showcased their presence,'' the PM said.

The PM further said, ''After assuming office in 2014, I went to the UN. I went to the UN even now. In these five years, I have seen a big change. The respect for India, the enthusiasm towards India has increased significantly. This is due to the 130 crore Indians.''

The PM's fight landed at the Palam airport around 8.15 PM. PM Modi was recieved by BJP working president JP Nadda and top party leaders at the airport.

Prime Minister Narendra Modi arrives in Delhi, after concluding his visit to the United States of America. pic.twitter.com/nTnzzHSvus

The party had put banners and hoarding welcoming PM for his ''statesmanship and extraordinary speech'' at the United Nations General Assembly (UNGA). Party workers carrying placards lined up on both sides of the main road outside the Palam airport from where the PM's cavalcade passed upon his arrival. A make-shift stage was erected outside the aiport from where the PM later address the gathering.

BJP leaders had earlier claimed that more than 20,000 people will be present outside the Palam airport to welcome PM Modi.

During his week-long stay in the United States, the PM addressed the United Nations General Assembly (UNGA) at its 74th session.

Addressing the UNGA session in New York, PM Modi said that terrorism is one of the greatest challenges for humanity and called upon the world leaders to unite against it for the sake of humanity.

He said that peace and harmony is the need of the hour as he invoked the words of Swami Vivekananda in Chicago where he urged the global community to avoid dissensions.

The Prime Minister said India has given ''Buddha to the world and not Yuddha.''

He also conducted a mega diaspora event with none other than US President Donald Trump in Houston, Texas. The event witnessed more than 50,000 Indian-Americans in attendance.

During his visit, the Prime Minister also met CEOs of big business giants and held various bilateral meetings with counterparts of other nations, officials.

Top BJP leadership hailed Prime Minister Narendra Modi as "true statesman" for his "historic" speech at UNGA and congratulated him for putting India on the world stage as a leading voice.

Taking to Twitter soon after PM Modi's speech, Union Home Minister Amit Shah said, ''like a true statesman, PM Modi has not only conveyed the message of universal brotherhood but also reminded the world of India`s unprecedented contribution towards global peace.''

"From Jan Bhagidari to Jan Kalyan to Jag Kalyan is the new mantra for the world to follow. I congratulate PM Modi for a historic speech at UNGA," he said.

Shah said the Prime Minister perfectly summed up India's cultural ethos and aspirations of 130 crore Indians and the country`s resolve to build a better future for our people.

"PM Modi has put India on the world stage as a leading voice of reason and purpose," he added.

Defence Minister Rajnath Singh said PM Modi`s appeal to the world for a united effort against terrorism was his most important message."Congratulations to Prime Minister Shri Narendra Modi for delivering a powerful message at UNGA. His speech was a manifestation of India`s imprint and intent at the global stage. His appeal to world for a united effort against terror was his most important message," he tweeted.

Union Minister Nitin Gadkari also thanked the Prime Minister for strongly putting forward 130 crore Indians voice at world forum."He opened the eyes of world from issues ranging from global warming to terrorism. It is again proved that the world can move ahead for peace under India`s leadership," he said in a tweet.

"Modi ji`s historic speech at UNGA covering issues like world peace, multilateralism, environment protection, sanitation, health and financial inclusion has touched the hearts of not only Indians but people worldwide. Under his leadership, India is not only solving local problems but showing way to the world," he said.

Law Minister Ravi Shankar Prasad said PM Modi`s "outstanding" speech was by an acknowledged global leader showcased the heritage, values of Indian civilisation and also the extraordinary inclusive development which India has achieved under his leadership.

India way ahead of China, US in terms of GDP growth rate: Giriraj Singh on economic slowdown