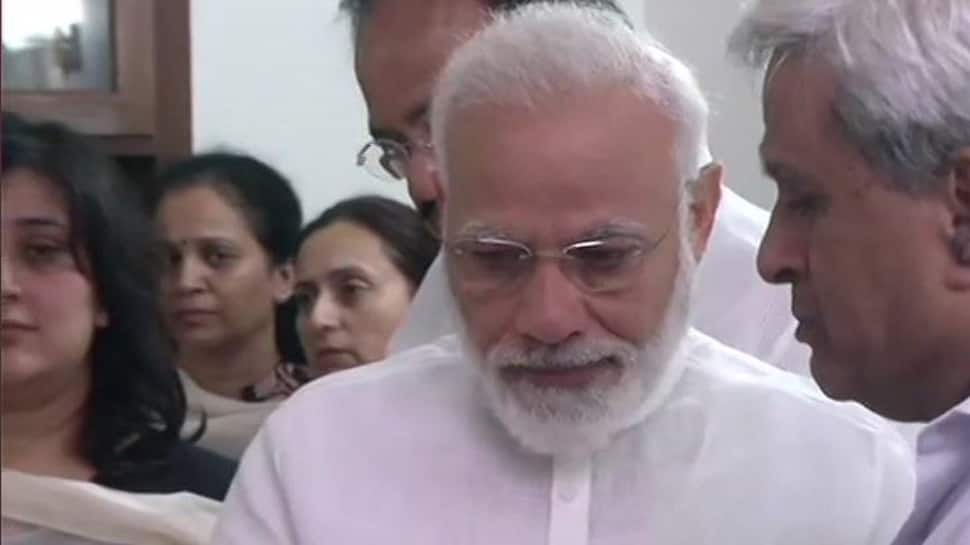 Prime Minister Narendra Modi, among others, paid last respects to former external affairs minister and Bharatiya Janata Party (BJP) stalwart Sushma Swaraj at her Dhawan Deep building residence in the national capital on Wednesday. The Prime Minister got emotional as he paid tribute to popular leader.

The Prime Minister was among the first ones to pay tribute to Sushma Swaraj after she breathed her last at around 9 am at the All India Institute of Medical Sciences (AIIMS) in the national capital on Tuesday. He said that the BJP stalwart’s demise the end of “a glorious chapter in Indian politics”.

Referring to the former Union minister as “a source of inspiration for crores of people”, Modi said, “Sushma Swaraj Ji was one of her kind”.

“A glorious chapter in Indian politics comes to an end. India grieves the demise of a remarkable leader who devoted her life to public service and bettering lives of the poor. Sushma Swaraj Ji was one of her kind, who was a source of inspiration for crores of people,” he wrote on microblogging site Twitter.

Modi further called Sushma Swaraj “a prolific orator and outstanding Parliamentarian”, who was respected and loved across party lines.

“Sushma Ji was a prolific orator and outstanding Parliamentarian. She was admired and revered across party lines. She was uncompromising when it came to matters of ideology and interests of the BJP, whose growth she immensely contributed to,” Modi said.

“An excellent administrator, Sushma Ji set high standards in every Ministry she handled. She played a key role in bettering India’s ties with various nations. As a Minister we also saw her compassionate side, helping fellow Indians who were in distress in any part of the world.

I can’t forget the manner in which Sushma Ji worked tirelessly as EAM in the last 5 years. Even when her health was not good, she would do everything possible to do justice to her work and remain up to date with matters of her Ministry. The spirit and commitment was unparalleled.

Sushma Ji’s demise is a personal loss. She will be remembered fondly for everything that she’s done for India. My thoughts are with her family, supporters and admirers in this very unfortunate hour. Om Shanti,” he tweeted.

Just hours before her demise, Sushma Swaraj took to Twitter on Tuesday to laud Prime Minister Modi over abrogation of Article 370. “Thank you Prime Minister. Thank you very much. I was waiting to see this day in my lifetime,” read her last tweet.