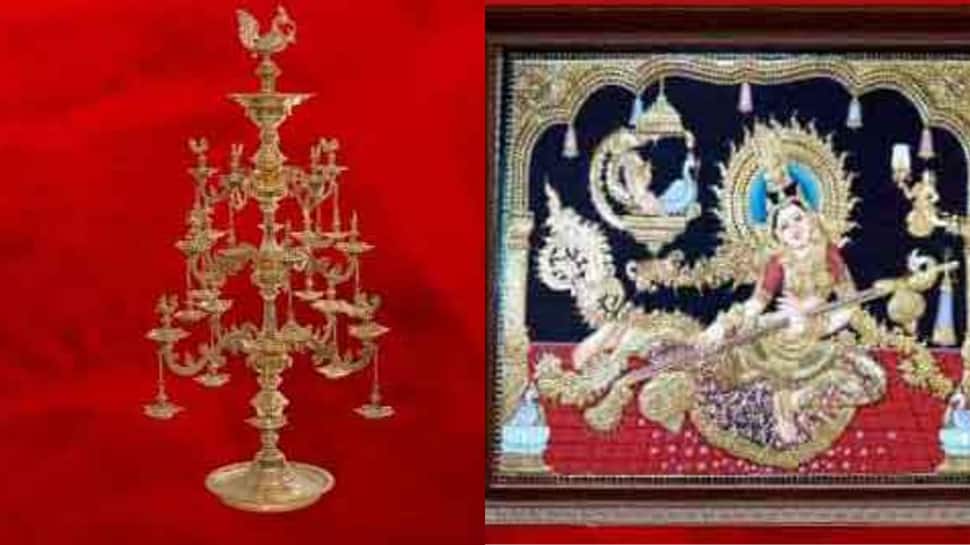 The lamp, exclusively made in Tamil Nadu's Nachiarkoil town by a local community called Pathers, has a round base decorated with beautiful patterns. It has a slender and intricately-designed ornamental stem with branches taking off at three levels. At the top of the stem is a bowl of five spouts for wicks to light the lamp. Above the lamp is the 'Annam', a celestial bird that is reputed to be able to separate milk from water and figuratively good from the bad.

The lamp is made up of bronze and is resplendently gold-coated, the lampstands are six-feet-tall, weighs 108 kilograms and took 12 days to be completed. At the top of the stem is a bowl with five spouts for wicks to light the lamp. The branches extend to hold 24 bowls with 120 spouts for placing wicks.

The ornate and intricate Thanjavur painting gets its name from the ancient town of Thanjavur in Tamil Nadu and the art form of where dates back to the 16th and 18th centuries. The painting depicts a dancing Saraswathi and is three-feet high, four-feet wide, and took about forty-five days to get completed.

The painting is set in a wooden frame carved with beads, the traditional motif used for such frames. The central motif of the painting is the Dancing Hindu Goddess Saraswathi, considered the embodiment of knowledge, music, art, nature and wisdom.

The painting portrays Saraswathi playing the Veena, and dancing in celebration of eternal bliss. It also has the celestial bird `Annam` which is a symbol of purity, prosperity, divinity, and elegant beauty. The Thanjavur painting, also known as "Palagai Padam" (paintings of wood) is an ancient miniature form of painting and its presence is said to bring knowledge, prosperity and success to its owner.

The second informal summit between India and China began on Friday in the historic coastal suburb of Chennai, Mahabalipuram. Prime Minister Narendra Modi donned the traditional outfit of Tamil Nadu and wore a white veshti with border, a white half-sleeved shirt and a bordered angavastram for the crucial meet.