PM Narendra Modi will address the 74th session of the UN General Assembly (UNGA) on Friday. In the interim years, the UNGA was addressed by then External Affairs Minister Sushma Swaraj. As in 2014, this time too, India is slated to speak before Pakistan at the UNGA 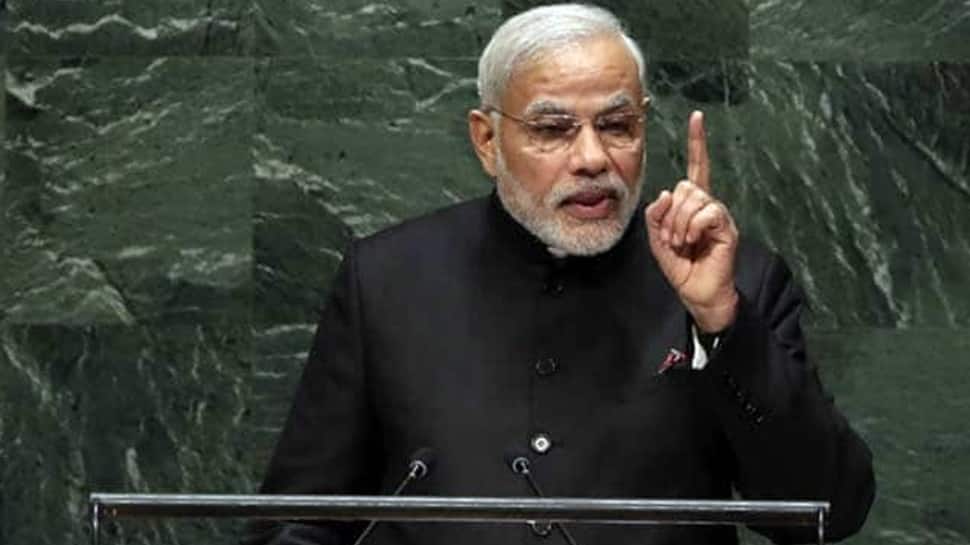 NEW YORK: Four years after he last addressed the world body, Prime Minister Narendra Modi will address the 74th session of the UN General Assembly (UNGA) on Friday. In the interim years, the UNGA was addressed by then External Affairs Minister Sushma Swaraj. As in 2014, this time too, India is slated to speak before Pakistan at the UNGA.

Surely, all eyes will be on the UN General Assembly (UNGA) where India and Pakistan will take the stage, with Prime Minister Narendra Modi outlining the country's larger role on the world stage and what it was doing for development, peace and security, while his Pakistan counterpart Imran Khan will solely focus on Kashmir.

PM Modi`s address at the 74th session of the UNGA on Friday will take place around 7.30 PM (IST).

He will be among the first few speakers and Khan is slated to address the world body after him. India has made it clear that it will not mention Kashmir at all during the time allotted to speak at the global forum as revocation of the Article 370 was an entirely "internal issue".

India`s Permanent Representative to the UN, Ambassador Syed Akbaruddin has said that India will "soar high if Pakistan stoops low" by raking up the Kashmir issue at the UNGA.

Here's how India has been exposing Pakistan at the UNGA in the last past five years:

Addressing the 69th session of the UNGA in 2014 in Hindi, PM Modi called for urgent reform and rejuvenation of the UN. He pressed for the need for early adoption of the Comprehensive Convention on Global Terrorism, saying it was a matter that has been pending for long. He also said his government has given priority to friendship and cooperation with neighbours and has the same policy towards Pakistan.

PM Modi said that he wanted bilateral talks with Pakistan, in all seriousness, in an environment of peace, without the shadow of terror. He said it was up to Pakistan to create an appropriate atmosphere for talks, and added that raising issues in the UNGA was not the way to make progress towards resolving bilateral issues.

In 2015, the then External Affairs Minister Sushma Swaraj had addressed the UNGA, while Modi spoke at the UN Sustainable Development Summit. At the 70th UNGA session, then Pakistan Prime Minister Nawaz Sharif, speaking before India, proposed a four-point peace initiative on Kashmir. To which Sushma Swaraj responded that only one point, not four, was needed and that was for Pakistan to stop terrorism against India.

"Let me use this occasion to spell out our approach clearly. India remains open to dialogue. But talks and terror cannot go together. Yesterday the Prime Minister of Pakistan proposed what he termed as a four-point new peace initiative. I would like to respond. We do not need four points, we need just one - give up terrorism and let us sit down and talk," she said.

India proposed that the two sides speak at the level of NSAs on all issues connected to terrorism and hold an early meeting of Directors General of Military Operations to address the situation on the border.

Ahead of the 2016 address, the Uri attack had just taken place, and PM Modi had highlighted Balochistan, Gilgit-Baltistan and Pakistan-occupied-Kashmir (PoK) in his Independence Day speech. Sharif in his speech earlier had said that India was imposing unnecessary pre-conditions for dialogue. He had also eulogised slain militant Burhan Wani as a martyr and "symbol of the latest Kashmiri Intifada".

In response, Sushma Swaraj said, "The Prime Minister of Pakistan used this podium to make baseless allegations about human rights violations in my country. I can only say that those accusing others of human rights violations would do well to introspect and see what egregious abuses they are perpetrating in their own country, including in Balochistan. The brutality against the Baloch people represents the worst form of State oppression."

Attacking Pakistan, she said that Islamabad "persists in the belief that such (terror) attacks will enable it to obtain the territory it covets. My firm advice to Pakistan is: abandon this dream. Let me state unequivocally that Jammu and Kashmir is an integral part of India and will always remain so".

In 2017, Pakistan was again slotted to speak ahead of India, with then Prime Minister Shahid Khaqan Abbasi in his address again highlighting Kashmir and India's alleged rights violations.

Pakistan had also sentenced Kulbhushan Jadhav to death for alleged espionage, and the case was before the International Court of Justice (ICJ). Sushma Swaraj, speaking in Hindi, listed out some of the Modi government's developmental programmes, including Jan Dhan, Ujjwala, GST, Beti Padhao, Beti Bachao, among others.

"We are completely engaged in fighting poverty; alas, our neighbour Pakistan seems only engaged in fighting us. On Thursday, from this dais, Pakistan's Prime Minister Shahid Khaqan Abbasi wasted rather too much of his speech in making accusations against us. He accused India of state-sponsored terrorism, and of violating human rights. Those listening had only one observation: 'Look who's talking!' A country that has been the world's greatest exporter of havoc, death and inhumanity became a champion of hypocrisy by preaching about humanity from this podium," she said.

In 2018, Sushma Swaraj addressed the UNGA after her Pakistan counterpart Shah Mehmood Qureshi.

Earlier, India had accepted Pakistan Prime Minister Imran Khan's proposal for a meeting with Qureshi on the sidelines of the General Assembly. But New Delhi called it off, following the brutal killings of three policemen in Jammu and Kashmir and Islamabad releasing postage stamps "glorifying" Burhan Wani.

Attacking Pakistan in her address, she said: "In our case, terrorism is bred not in some faraway land, but across our border to the west. Our neighbour's expertise is not restricted to spawning grounds for terrorism; it is also an expert in trying to mask malevolence with verbal duplicity."

The fact that Osama bin Laden, the former Al Qaeda chief and architect of the September 11, 2001 attacks, was given safe haven in Pakistan is evidence of this, she said. Challenging the idea that India is sabotaging peace talks, she said that such talks had begun many times and that if they stopped, it was only because of Pakistan's behaviour.

This year, India is slated to speak before Pakistan and PM Modi is to address the August House.

New Delhi has made clear it will not mention Kashmir at all during the time allotted to speak at the global forum as revocation of Article 370 is an entirely internal issue.