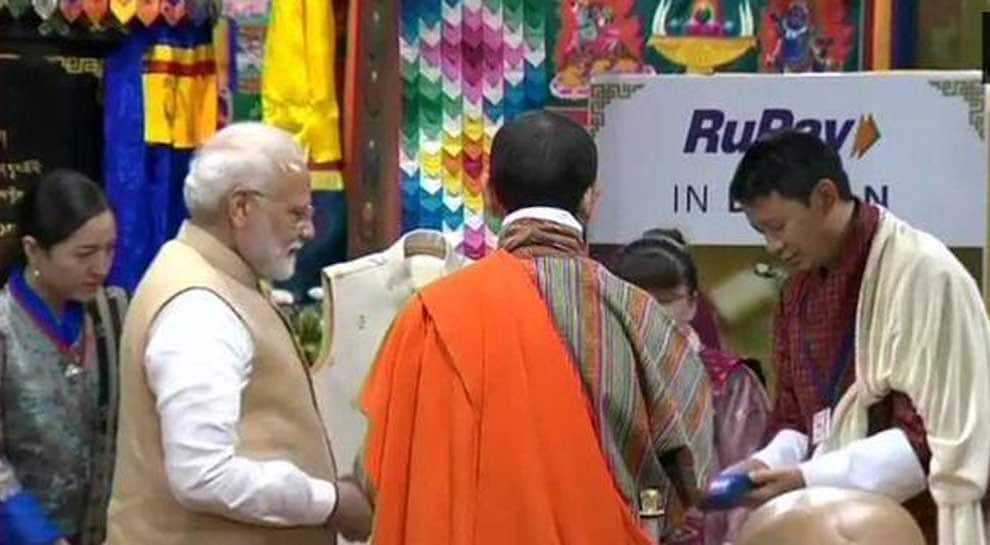 Thimphu: Prime Minister Narendra Modi, who is on a two-day state visit to Bhutan, on Saturday launched the RuPay Card by making a purchase at Simtokha Dzong.

''I am very happy that today we have launched RuPay card in Bhutan. It is our privilege that we have been a major partner in the development of Bhutan. India's cooperation in Bhutan's five-year plans will continue,'''the PM said.

''Who will not want a friend and a neighbour like Bhutan. It is an honour for us that India is a part of the development of Bhutan,'' the PM added.

A total of nine Memorandum of Understanding (MoUs) were also signed between India and Bhutan at Simtokha Dzong in presence of Prime Minister Narendra Modi and his Bhutanese counterpart.

Shortly after his arrival in Bhutan, PM Modi received a Guard of Honour at the Tashichhoedzong Palace.

A traditional Chipdrel procession was hosted in the honour of the visiting dignitary.

"Traditional Chipdrel procession and welcome ceremony at the Tashichhodzong Palace for PM @narendramodi before the audience with His Majesty the King of Bhutan. The ceremony symbolises the purification of the path along which the guests are led," MEA spokesperson Raveesh Kumar had tweeted.

This is PM Modi's second visit to the Himalayan nation and first since his re-election as Prime Minister.

PM Modi arrived at the Paro International Airport earlier in the day and was received by his Bhutanese counterpart Lotay Tshering.

The children in their traditional Bhutanese dress stood in rows along the streets as the Prime Minister made his way from Paro to Thimphu in the motorcade.

PM Modi was also greeted by the Indian diaspora at hotel Taj Tashi in Thimphu. The Prime Minister's visit exemplifies the importance India attaches to its neighbourhood first policy.

A banquet will also be hosted in honour of the Prime Minister later.