In Houston, the PM will interact with various groups of the Indian-American community. 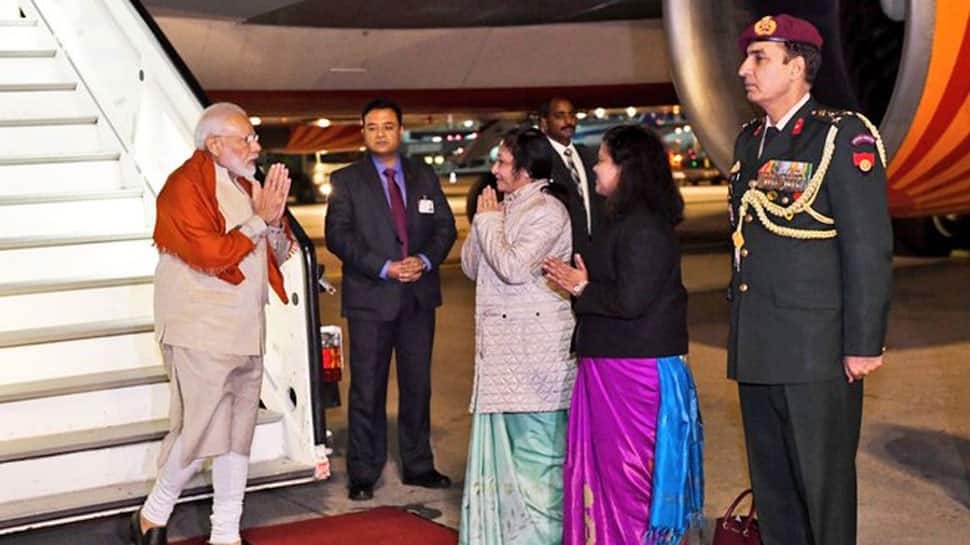 Frankfurt: Prime Minister Narendra Modi on Saturday left for Houston for participating in the 'Howdy, Modi' event on Sunday after a two-hour halt in Frankfurt. PM Modi will stay in the US from September 21 to 27 during which he will hold talks with US President Donald Trump and review the bilateral relations in order to bring even more benefits to both countries and its people.

"Early morning touchdown in #Frankfurt on the way to #Houston. PM @narendramodi welcomed by Ambassador @eoiberlin Mukta Tomar and Consul General @CGIFrankfurt Pratibha Parkar during the 2-hour technical halt in Frankfurt," the official spokesperson of the Ministry of External Affairs tweeted.

Early morning touch down in #Frankfurt on the way to #Houston. PM @narendramodi welcomed by Ambassador @eoiberlin Mukta Tomar and Consul General @CGIFrankfurt Pratibha Parkar during the 2-hour technical halt in Frankfurt. pic.twitter.com/JUiuz1E2mx

In his departure statement, the Prime Minister provided with the detailed the itinerary of his visit to the US where he will interact with CEOs of leading energy companies, besides attending a community event in Houston and addressing the 74th session of the UN General Assembly in New York.

PM Modi will also be honoured with the Global Goalkeepers Goals Award 2019 from Bill and Melinda Gates Foundation.

“In Houston, I look forward to my meeting with and address to the Indian-American community. Their success in diverse fields, their contribution to the US in various walks of life, their strong bonds with India and their role as a living bridge between our two democracies is a source of pride for us,” he said in a reference to the “Howdy Modi event”, where Trump will also be present.

“It is a matter of great honour for the Indian diaspora and pleasure for me that President of the United States Donald Trump will grace the occasion with his presence and join me in addressing the community. This would be a maiden appearance of US President in an Indian community event with me, and marks a new milestone in our outreach to them,” PM Modi underlined.

“While in Houston, I will also have the opportunity to interact with various groups of the Indian-American community and their elected representatives,” the Prime Minister said.

PM Modi will also be addressing the United Nations General Assembly in New York and meet other world leaders on the margins of the event.

The Prime Minister said he will further highlight India’s “unwavering commitment to multilateralism to advance peace and security and promote broad-based inclusive economic growth and development in the world,” at the UN, apart from terrorism and many other pressing issues of the world economy including climate change and poverty.

The theme of this year’s UNGA session is “Galvanising multilateral efforts for poverty eradication, quality education, climate action, and inclusion”. The Prime Minister said he will reiterate India’s commitment to reformed multilateralism, which is responsive, effective and inclusive.

The Prime Minister said, “Through my participation in UN events, I will showcase our success in realizing the Sustainable Development Goals. At the Climate Action Summit on September 23, I will highlight India’s robust action to address climate change in line with global goals and our international commitments.”

PM Modi said he is looking forward to presenting India’s achievements in providing healthcare for the needy through many initiatives, including the Ayushman Bharat programme at the UN event on Universal Health Coverage.

“India will also host at the UN an event to celebrate the 150th Birth Anniversary of Mahatma Gandhi, which will underline the continuing relevance of Gandhian thoughts and values in today’s world. Several Heads of State and Government along with UN Secretary-General will grace the occasion to pay our collective tribute to Gandhiji and underscore the significance of his message,” he remarked.

“I will also hold bilateral meetings with leaders from other countries and UN entities on the margins of the UNGA. For the first time, India will hold leadership-level interactions with the leaders of the Pacific Island States and leaders of the CARICOM group on the margins of UNGA. This will take forward our vibrant South-South cooperation and partnership with them,” he said.

The Prime Minister said he looks forward to meeting Trump twice, in Houston and New York, where the bilateral ties will be reviewed.

“I look forward to meeting President Trump in Houston and New York in a span of a few days. We will review our bilateral relations in order to bring even more benefits to our two nations and peoples. The US is a vital partner for our national development, with rich possibilities of partnership in education, skills, research, technology and innovation, and an enabler for India in economic growth and national security,” PM Modi said.

“Shared values, convergent interests and complementary strengths provide the foundation for the natural partnership between the world’s oldest and largest democracies. Working together, we can contribute to building a more peaceful, stable, secure, sustainable and prosperous world,” he said.

PM Modi underlined that the New York leg of his visit will cover important elements of bilateral ties between India and the US.

“I look forward to addressing the opening plenary of the Bloomberg Global Business Forum and inviting American business leaders to participate more actively in India’s economic growth and transformation,” the Prime Minister said.

PM Modi said he was honoured by the decision of the Bill and Melinda Gates Foundation to confer the Global Goalkeepers Goals Award 2019 upon him.

The 'Howdy, Modi' event, which is scheduled for Sunday, will be attended by US President Donald Trump among other top dignitaries. It will be the largest gathering for an elected foreign leader other than the Pope, the organisers said on Friday and noted that it will be a celebration of the cultures of India and the US.

The stage is all set at the sprawling NRG stadium for the event which is to be attended by close to 50,000 Indian-Americans.

Even as rains have brought life to a standstill in the American state of Texas, the organisers remain positive about the success of Sunday`s mega-event, which will be the first of its kind.