Prime Minister Narendra Modi has arrived in Houston for the mega 'Howdy Modi!' event in which he will address over 50,000 Indian-Americans on Sunday evening. 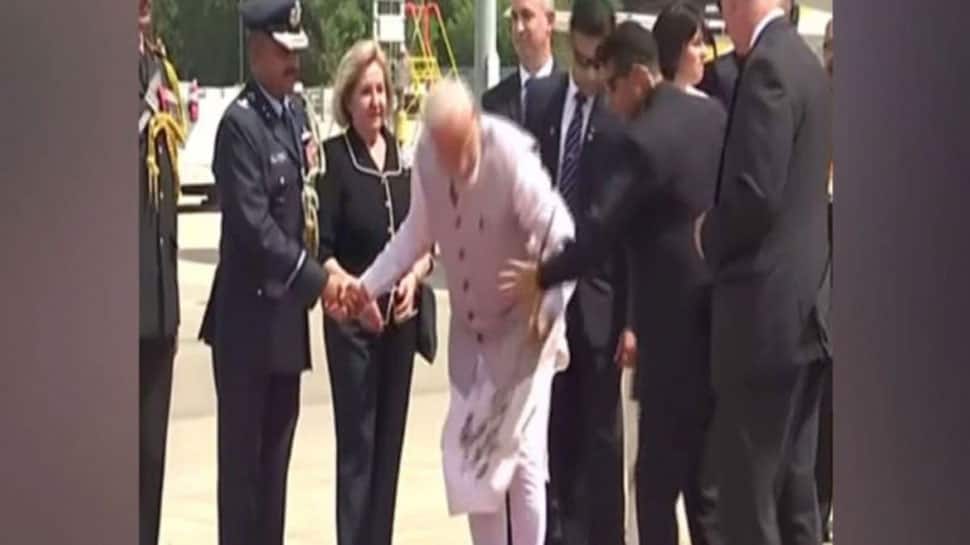 Houston: Prime Minister Narendra Modi has arrived in Houston for the mega 'Howdy Modi!' event in which he will address over 50,000 Indian-Americans on Sunday evening.

He was welcomed at the Houston airport on his arrival on Saturday by Indian and American officials. As an American dignitary presented him with a bouquet, a flower fell from it, and PM Modi gracefully bent down to pick up the flower and handed it over to his security personnel.

The video of the incident went viral on social media where Twitter users heaped praises for the prime minister, hailing his silent gesture promoting the importance of cleanliness on a global platform.

#WATCH United States: PM Narendra Modi arrives in Houston, Texas. He has been received by Director, Trade and International Affairs, Christopher Olson and other officials. US Ambassador to India Kenneth Juster and Indian Ambassador to the US Harsh Vardhan Shringla also present. pic.twitter.com/3CqvtHkXlk

Here is a look at some of the reactions of the users applauding the PM for his gesture.

Such is the down to earth nature of our PM that he doesn't even cares for any protocol.

Where PM Narendra Modi spontaneously picks up a flower or a stem, which had fallen on the ground from a bouquet presented to him, and hands it over to his security staff. Simplicity! #ModiInUSA #HowdyMody

Was that a belief of not crushing part of plant with feet or was it a gesture towards Swachhta Abhiyan? Watch at 00:50 in the video.@narendramodi _#InternationalDayOfPeace#ArmyReadyToLiberateIOK#SaturdayThoughts#PMModi #Houston #SwachhataAbhiyan #SwachhBharatMission

PM Modi is on a seven-day visit to the US, his first since assuming office after winning Lok Sabha elections 2019. The much-anticipated 'Howdy Modi' event will be held at NRG Stadium in Houston. US President Donald Trump and other senior officials are also scheduled to attend the event.

India may buy 36 more Rafale fighter jets from France, deal likely to be signed in early 2020