PM Narendra Modi unveils bust of Mahatma Gandhi in Seoul, says Bapu showed how to live in harmony with nature

PM Narendra Modi is on a two-day visit to South Korea. 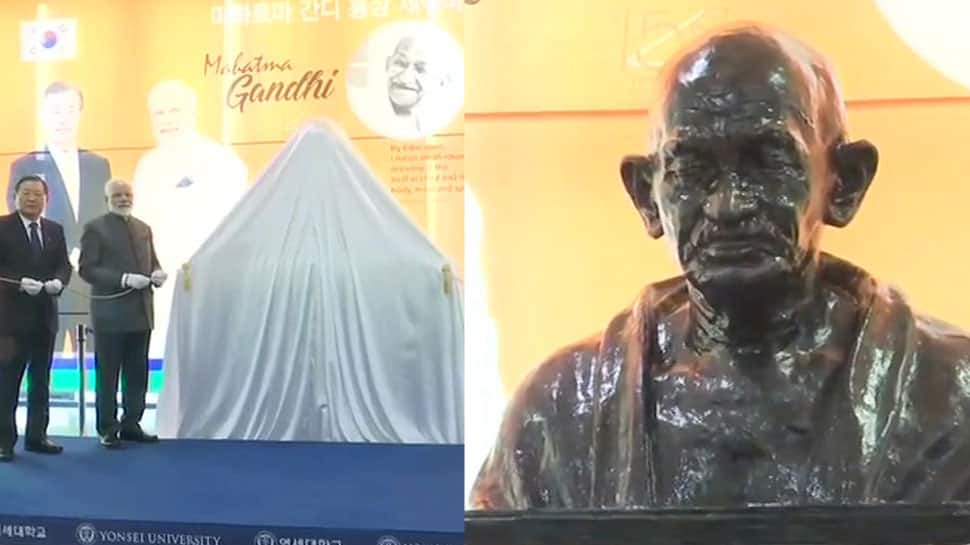 PM Narendra Modi was accompanied by South Korea President Moon Jae-in and former UN Secretary-General Ban Ki-moon during the unveiling of a bust of Mahatma Gandhi at the Yonsei University in Seoul.

While unveiling the bust of Mahatma Gandhi, PM said, ''The thoughts and ideas of Gandhi ji have the power to help us overcome the menace of terrorism and climate change, two big challenges that  humanity faces in these times.''

''It is an honour to unveil the bust of Bapu at Yonsei University in Seoul. This becomes even more special because we are doing so at a time when we mark the 150th birth anniversary of Bapu Ji,'' PM Modi said.

''Through his lifestyle, Bapu showed what living in harmony with nature is. He also showed that it is important to leave a clean and green planet for the future generations,'' the PM said in his address.

PM Modi had arrived in South Korea's capital Seoul on Thursday morning on a two-day visit to the East Asian country during which the two sides will seek to enhance cooperation in diverse areas, including trade and investment.

PM Modi will hold bilateral talks with South Korean President Moon Jae-in and also receive the Seoul Peace Prize which has been conferred on him in recognition of his dedication to international cooperation, global growth and human development.

Besides summit meeting with President Moon Jae-in, Prime Minister Modi will also have a number of engagements with the Korean leadership, businesses and Indian community.

At present bilateral trade is around 21 billion dollars and is targeted to reach 50 billion dollars by 2030. Another important aspect is the strengthening of cultural relations which speaks volumes of India's soft power.

Prime Minister will meet the mayor of Kimhae city, which is believed to have ancient ties with the city of Ayodhya. It acts as a catalyst for people to people relations.

As part of the global celebrations of the 150th birth anniversary of Mahatma Gandhi, Prime Minister will unveil a bust of Mahatma at the Seoul campus of Yonsei University.

He will also interact with the Indian community in South Korea.

Ahead of his visit, the PM described South Korea as an important partner for India's key initiatives such as 'Make in India', and said as fellow democracies the two countries share values and vision for regional and global peace.

PM Modi is visiting South Korea on the invitation of President Moon Jae-in.

This is his second visit to the Republic of Korea since 2015 and a second summit meeting with President Moon Jae-in.

"Our people to people ties and exchanges, as always, provide the bedrock of our ties of friendship,'' he said.

"Working together, we are determined to take our relationship forward as a 'future-oriented partnership for people, prosperity and peace'," the PM said.