Assam Finance Minister Himanta Biswa Sarma said the Prime Minister also announced an additional Rs 100 crore to institute a high-powered group, including scientists, technocrats and bureaucrats from central and state governments, to study the course of the Brahmaputra river for a permanent solution to the floods in the region. 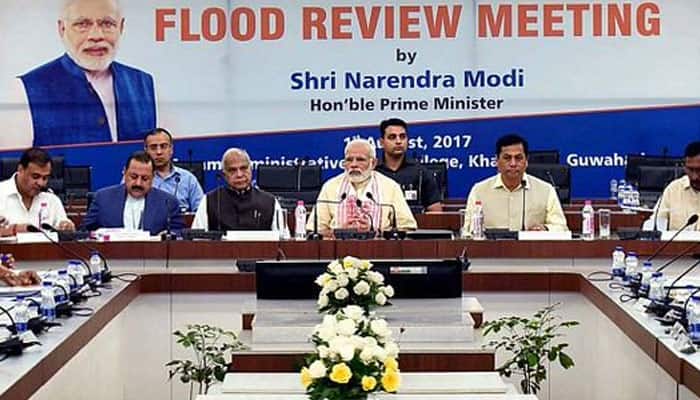 Guwahati: Prime Minister Narendra Modi on Tuesday announced Rs 2,000 crore for northeastern states to deal with the damage caused by floods that have killed 76 persons in Assam and affected millions.

The Prime Minister, who arrived in Assam on Tuesday morning on a day-long visit to review the flood situation and relief works in the state, held meetings with Assam ministers as also alliance partners of the BJP-led government in the state.

He also met Chief Ministers of Nagaland, Arunachal Pradesh and Manipur. A memorandum was received from the Chief Minister of Mizoram, who could not make it to the meeting.

Assam Finance Minister Himanta Biswa Sarma said the Prime Minister also announced an additional Rs 100 crore to institute a high-powered group, including scientists, technocrats and bureaucrats from central and state governments, to study the course of the Brahmaputra river for a permanent solution to the floods in the region.

Sarma said the Prime Minister also announced Rs 250 crore for immediate flood relief in Assam. He said the amount would likely be released on Tuesday itself.

After arriving at the Lokapriya Gopinath Bordoloi International airport around 10 a.m., Modi took an Indian Air Force chopper to go to Khanapara area where he met the chief ministers.

An official release later said that over Rs 1,200 crore will be for repair, maintenance, and strengthening of roads, highways, bridges, and other damaged infrastructure in the region.

The statement said that Rs 400 crore will be provided for improving the water holding capacity of the Brahmaputra river, which will assist in flood control.

The release said an ex-gratia assistance of Rs 2 lakh to the next of kin of the deceased and Rs 50,000 to each of those seriously injured due to the floods has been sanctioned under the Prime Minister's National Relief Fund (PMNRF).

The government has also decided to constitute a high level committee, with representation from central ministries and states for proper management of the region's vast water resources which are about one third of the country's total resources.

The release said that the central government has approved Rs 600 crore as central share of the State Disaster Response Fund (SDRF) in the current year. "Of this, Rs 345 crore has already been released and the remaining will be released immediately to assist the states in relief and rehabilitation work," the release added.