On the issue of detention of political leaders of J&K, Madhav said, ''Detention is a common thing for politicians.'' 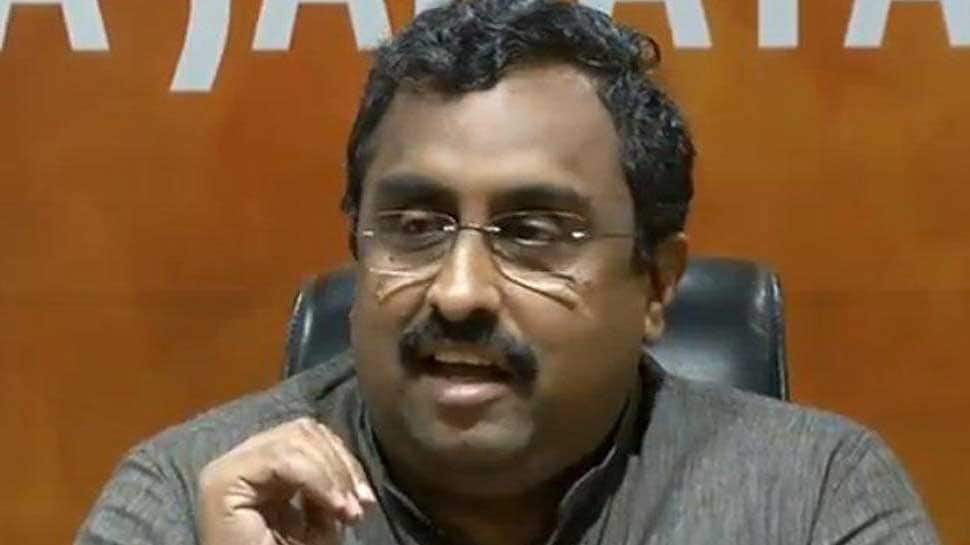 JAMMU: A day after the Narendra Modi government scrapped the special status granted to Jammu and Kashmir by abrogating Article 370, BJP national general secretary Ram Madhav on Wednesday said that Pakistan occupied Kashmir (PoK) and Aksai Chin are part of Jammu and Kashmir and that Kashmir Valley is an integral part of the country.

The BJP leader said that a resolution to reclaim parts of Indian territories which are under the occupation of other countries have earlier been passed by parliament in 1994. The Centre's move of scrapping Article 370 is a not matter of just one political party, but it's a national issue.

Madhav questioned as to why so much of hue and cry is being raised over Centre's move as the Article 370 has been amended nearly 40 times in the past and those amendments were moved by non-BJP governments of that time.

On the issue of detention of political leaders of J&K, Madhav said, ''Detention is a common thing for politicians.''

On Tuesday - the day when Home Minister Amit Shah announced the move to scrap Article 370  in J&K - Ram Madhav had tweeted an old photo of Prime Minister Narendra Modi at an event over the issue of Article 370 with the message: "Promise fulfilled".

In the undated photograph, a young Narendra Modi can be seen sitting on what appears to be a stage, with his left arm resting on a cushion. In the background, there is a banner; part of it reads, "Remove 370, end terrorism..."

On Tuesday, Jammu and Kashmir lost its special status and the state was bifurcated as Parliament approved a resolution ending applicability of Article 370 of the Constitution to the state and passed a bill to create two Union Territories - Jammu and Kashmir and Ladakh.

After the bifurcation, Jammu and Kashmir will now be a Union Territory with an Assembly, which Home Minister Amit Shah was a "temporary" measure and full statehood could be restored after normalcy returns there.

The Bill, providing for bifurcation, was passed with over 350 members voting in its favour, a day after the Rajya Sabha approved the legislation.

Replying to the debate on Jammu and Kashmir Reorganization Bill, 2019, Shah said the government was correcting a "historic blunder" after 70 years as the Article 370 stopped Jammu and Kashmir's full integration with the country. Asserting that the decision has been taken for the welfare of the Valley, he said that the state is most dear to the government.

"People of the Valley are our own. We want to embrace them because they have given the maximum sacrifice and faced the maximum pain. Over 41,00 people of the state have been killed since 1989 only because of Section 370.

"What did we get from Article 370? It gave unemployment and kept far from education. It only encouraged separatism pressed by Pakistan," he said, adding it also prevented democracy. Shah also assured that whatever mistakes were done by previous governments will not be repeated.

Union Home Minister Amit Shah had on Tuesday asserted that Pakistan occupied Kashmir (PoK) and Aksai Chin are part of Jammu and Kashmir and that Kashmir Valley is an integral part of the country.

"Kashmir is an integral part of India, there is no doubt over it. When I talk about Jammu and Kashmir, Pakistan occupied Kashmir and Aksai Chin are included in it," he said.

On this, Opposition leaders said that the minister was getting worked up to which Shah hit back saying he was ready to die for Kashmir.

Shah asked Leader of Congress in Lok Sabha Adhir Ranjan Chowdhury, "How can you not consider Pakistan occupied Kashmir as a part of India. We will give our lives for this region. When I say Jammu and Kashmir, I also include PoK. As clearly mentioned in the Constitution, the boundaries of Jammu and Kashmir include PoK and Aksai Chin."

While moving a resolution for abrogating some provisions of Article 370 and the Jammu and Kashmir Reorganisation Bill 2019, Shah said there has been a long-standing demand for status of Union Territory to Ladakh, which was fulfilled by the Narendra Modi government.

The measures received the support of many non-NDA parties, including the BJD, the YSR Congress, the TDP and the BSP. However, the Congress, the DMK, the NCP, the RSP and the SP opposed it.