Palestinian President Mahmoud Abbas on Monday said he will seek the help of PM Modi's good offices in reaching a solution to the Palestinian issue. 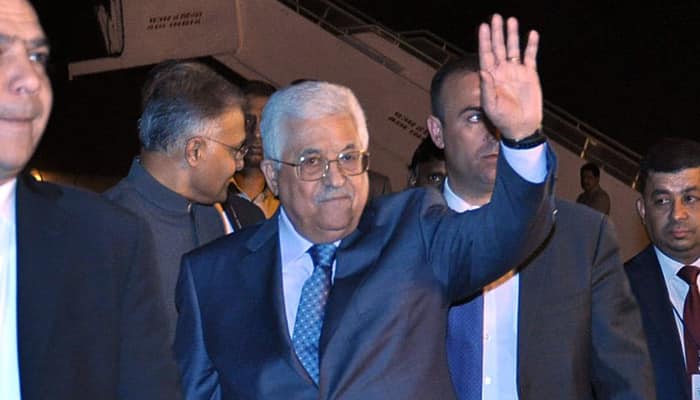 New Delhi: Palestinian President Mahmoud Abbas on Monday said he will seek the help of Prime Minister Narendra Modi's good offices in reaching a solution to the Palestinian issue which will help in the fight against terrorism in that part of the world.

Ahead of Prime Minister Narendra Modi's visit to Israel in July, Abbas said India should continue to play the important role that it has been playing to bring peace in the Middle East.

"So India can play a very important role in bringing peace in Israel," he said.

"Tomorrow when I will be meeting Prime Minister Narendra Modi, I will discuss with him and I will ask him to utilise the Indian capacity, Indian good offices to bring peace between the two countries."

Modi and Abbas are scheduled to hold bilateral discussions on Tuesday.

Abbas said that he had a very successful meeting with US President Donald Trump last month and has also met his German and Russian counterparts Frank-Walter Steinmeier and Vladimir Putin respectively and discussed the issue.

"What we are trying to is to implement the two-state solution (based) on the border of June 1967 - that is to establish a sovereign, independent state of Palestine with East Jerusalem as its capital living in security and peace side by side with the state of Israel," he said.

He said that Palestine was ready to make peace and hoped for a response from Israeli Prime Minister Benjamin Netanyahu.

"Now, it is clear to everyone that solution of the Palestine issue, ending the (Israeli) occupation will greatly help in countering terrorism in the region," the Palestinian President said.

"So, achieving justice is the basis for the success in fighting terrorism being practised by terrorist groups such as ISIS (or Islamic State) and other extremist groups in the region," he said.

He described the Arab Spring as a "catastrophe" that tore the entire social fabric of the region.

Stating that India held a prominent place in the world, he said New Delhi has to play a role in the Middle East peace process.

Leader of the Opposition in the Rajaya Sabha Ghulam Nabi Azad, who was also present, recalled the words of Mahatma Gandhi's who said that Palestine was to the Arab just England was to the English people and France to the Frenach.

JD-U President Sharad Yadav said that Indians would always stand in support with the Palestinian people.

Abbas arrived here on Sunday on a four-day visit to India. This is his fifth visit to India and the third state visit after his visits in 2008 and 2012.

On Tuesday, apart from his talks with Modi, he will call on President Pranab Mukherjee at the Rashtrapati Bhavan